, Ph.D., senior research scientist and director of the Youth, Media, & Wellbeing Research Lab at the Wellesley Centers for Women (WCW), presented with a panel of experts on social media and technology from infancy to young adulthood at the Pediatric Academic Societies meeting in Toronto, Canada. Based on her work with Megan Moreno, M.D., M.P.H., M.S.Ed., at the University of Wisconsin, Madison, and funded through Children and Screens: Institute of Digital Media and Child Development, the May talk focused on the psychosocial and physical health associations of early social media use before age 12. 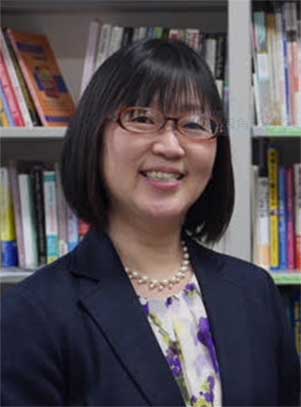 Makiko Deguchi, Ph.D., an associate professor in the Faculty of Foreign Studies at Sophia University in Tokyo, Japan, is serving as a WCW visiting scholar through early 2019. Trained as a cultural psychologist, Deguchi’s interests include the impact of social oppression on the psychology of both advantaged and disadvantaged group members. Her research investigates factors that lead people to take collective action (i.e. demonstrations and protests) and qualitative research on life histories of people who become allies to minority groups. Greatly influenced by the works of Peggy McIntosh, Ph.D., WCW senior research scientist and founder of the National SEED Project, and Janet E. Helms, Ph.D., director of the Institute for the Study and Promotion of Race and Culture at Boston College, Deguchi invited the two scholar-activists to present in a Tokyo symposium on ways to apply the concepts of privilege to the Japanese context last year. A recipient of the 2018 Fulbright scholarship, she is spending six months in the U.S., four of which will be at WCW sponsored by McIntosh to study privilege studies and campus dialogues around racism and privilege.

Deguchi teaches courses in Cultural Psychology, Psychology of Discrimination, Psychology of Positionality: Understanding Majority Privilege, and a seminar in Qualitative Research Methods in Psychology. She is also the President of the Society of Intercultural Education, Training, and Research in Japan. She translated into Japanese the book, Promoting Diversity and Social Justice: Educating Members of Privileged Groups” (Goodman, 2011), which was published through Sophia University Press in 2017. She is currently writing a book in Japanese on changing attitudes of dominant group members through privilege awareness.

This fall Tracy Gladstone, Ph.D., WCW associate director, senior research scientist, and director of the Robert S. and Grace W. Stone Primary Prevention Initiatives, presented “Six-Month Outcomes from a Randomized Clinical Trial of an Internet-Based Adolescent Depression Prevention Intervention in Primary Care” at the meeting of the Global Consortium for the Prevention of Depression in Mallorca, Spain. The consortium is comprised of a group of researchers who are interested in the development and dissemination of evidence-based interventions aimed at preventing the onset of depressive disorders. Their goal is to foster contact and collaboration of highly experienced and early-career scientists in the field, to facilitate the transfer and widening of current knowledge on depression prevention, and to mediate between advances in research and global policy-making, shifting the focus from curing to preventing depression.

Hauwa Ibrahim, J.D., S.J.D., M.L., WCW visiting scholar, participated in a Working Group on Promotion of Equality in Our Societies during “Vienna+25: Building Trust–Making Human Rights a Reality for All” in Austria this past May. This conference marked the 25th anniversary of the World Conference on Human Rights and welcomed stakeholders from diverse backgrounds to share their perspective on current challenges and best practices in the promotion and protection of human rights. Vienna+25 was organized by the Austrian Federal Ministry for Europe, Integration and Foreign Affairs, in cooperation with the Office of the United Nations High Commissioner for Human Rights, the City of Vienna, and the Ludwig Boltzmann Institute of Human Rights.

Ibrahim traveled to Brussels, Belgium, in early June to attend the 30th Anniversary Conference of the Sakharov Prize for Freedom of Thought. As a laureate, she was invited to attend a joint extraordinary meeting of the Committee on Foreign Affairs, Committee on Development, and the Sub-committee on Human Rights with Chairs of Human Rights/Foreign Affairs Committees from European Union (EU) national parliaments. The conference highlighted the EU engagement for human rights, gave visibility to current activities run by Sakharov Prize laureates, and emphasized key achievements of the Sakharov Prize Network. The award recognizes achievements in human rights, protection of minorities, defense of international cooperation and the development of democracy. Ibrahim was awarded the Sakharov Prize in 2005.

Also in Brussels in June, Ibrahim served on the panel, “Women/Girls in Power and Decision-making,” during the European Development Days (EDD). Organized by the European Commission, EDD 2018 aimed to bring together the EU's commitment to gender equality and women's empowerment with the 2030 Agenda for Sustainable Development. Ibrahim’s panel addressed women’s contribution to raising development cooperation efficiency in Africa and ways to best involve women in foreign aid operations so as to enhance their capacity to alleviate poverty in Africa. 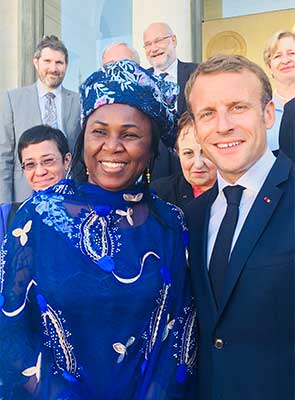 Ibrahim participated in the inaugural Normandy for Peace initiative held in June, which culminated with the "World Forum for Peace," an international landmark event backed by the D-Day commemorations focused on the issues of peace and conflict prevention. Decision-makers, intellectuals, researchers, and representatives of civil society gathered in Caen, France, to address the theme of Globalizing Peace: New Wars, New Peace with the aim of better understanding the new types of conflicts and the way to think of a sustainable peace together.

The Centers welcomed more than a dozen guests from around the globe who were taking part in the Mothers without Borders: Steering Youth Away from Violent Extremism conference, convened by Ibrahim and held at Harvard University, Cambridge, MA, over five days in July. During their visit, the activists met with Layli Maparyan, Ph.D., Katherine Stone Kaufmann ’67 Executive Director, Linda Williams, Ph.D., director of the Justice and Gender Based Violence Research Initiative, Linda Charmaraman, Ph.D., director of the Youth, Media, & Wellbeing Research Lab, and Kamilah Drummond Forrester, M.A., C.A.G.S, director of the Open Circle social-emotional learning program for elementary schools. The scholars discussed ways their research and action initiatives helped inform educators, practitioners, and families about best practices and efforts to support young people’s positive development. The delegation also met with Karen Pabon, director of the Slater International Center/International Student & Scholar Advisor at Wellesley College.

Jean Kilbourne, Ed.D., WCW senior scholar, presented “Sexism in Publicity: State of the Art and Ways Forward” during Gender and Media, an executive training seminar organized by the European University Institute in Florence, Italy. This conference brought together leading academics and practitioners to provide participants with the latest facts, figures, ideas and analysis about gender-based discrimination in traditional and digital media. Building on this knowledge, the course examined a diverse set of innovative strategies and best practices currently employed around the world to overcome such discrimination.

Natalia Marques, Wellesley College undergraduate (Class of 2019), traveled to Cabo Verde during the summer to serve as the second WCW-CIGEF intern, sponsored by the Anchor Point Fellows Program of the Albright Institute at Wellesley College. Marques is working on a training program for Cabo Verdean women in Bela Vista, Praia, with a special focus on gender-based violence and entering the formal labor force. Since 2013, WCW has been partnering with Centro de Investigação em Género e Família (CIGEF), a sister research institute housed at the University of Cabo Verde on shared priorities.