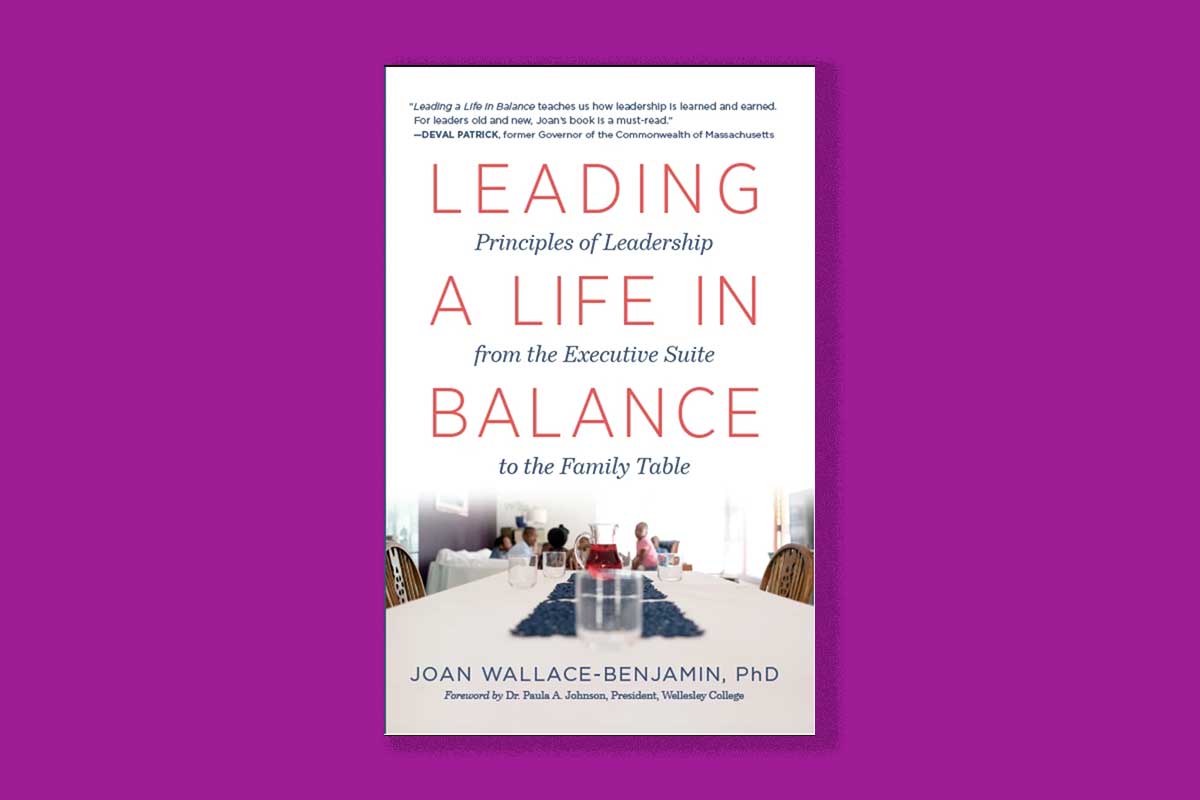 In my recently released book, Leading a Life in Balance: Principles of Leadership from the Executive Suite to the Family Table, I talk about the impact of confidence on one’s career, professional, and personal development, and the importance of building and strengthening one’s confidence over a lifetime. The conversation about confidence often centers around comparing women’s confidence to that of men.

A recent Boston Globe article entitled “The problem isn’t that women lack confidence – it’s that men have too much of it” suggests that women hold back and do not step forward for promotional opportunities on the job, often feeling like they are not ready. On the other hand, whether truly ready or not, men step forward and seek that same opportunity even when their experience and skills do not verify that they are able to do the job. Columnist Shirley Leung chalks that up to men having too much confidence, even when it’s not warranted.

When girls grow into women, they come into the workplace without the internal cheerleader that men carry with them. Women must create their own cheering squad: the occasional special mentor that may be a man; other women; the encouraging father; the enlightened female CEO who understands the importance of her words and deeds to her women employees.

But most importantly, I would suggest that they create their own internal cheering squad. Women who are high-performing athletes that receive public acknowledgment for their athletic achievements are often the exception. Most women, though, must build their confidence themselves, and it is a process.

I do not want to focus here on the men or suggest that all men are overly confident and not qualified. That would be far from the truth. What I do want to focus on is, irrespective of the men, what women (and their parents, starting from when they are girls) do to develop and build their own confidence.

In my experience, confidence is the fuel of development. One develops when confidence is strong. One’s confidence grows over time from working hard, viewing failure or mistakes as valuable feedback, persisting, and experiencing continuous success.

The harder a woman works, the stronger (better) she becomes, the greater the likelihood of success, the more confident (that she can do it) she becomes – the better, smarter, stronger, more successful she is. And over time, the willingness and ability to take on more challenging assignments grows because the woman knows she can do it; she is smart, educated, knows how to tackle a problem, and has learned how to learn.

This process, in some ways, can substitute for the lack of external cheerleading that men have gotten from childhood through adulthood, but that women should avail themselves of when possible. Many women, however, are building confidence in themselves and using it as the fuel they need to go far.

When women professionals enter that upwardly mobile spiral of confidence-building, they can be unstoppable. Preparation, knowing the material, studying it and then studying it again, practice, and focus are key. They appear confident and are confident because they are prepared and sure of their ability to get it done.

The fact that confidence can be developed over a lifetime is truly encouraging, because it means that confidence is not just something one has (or that others bestow), but something that one can attain through hard work and effort. It also suggests that in families, in schools, and on the job, an environment that allows confidence to flourish should be created and offered to both men and women in equal measure.

Joan Wallace-Benjamin, Ph.D., retired as president and chief executive officer of The Home for Little Wanderers in 2018 after 15 years of service. She currently runs an executive coaching practice and serves as chair of WCW’s Council of Advisors.

How Can We Support Working Parents? 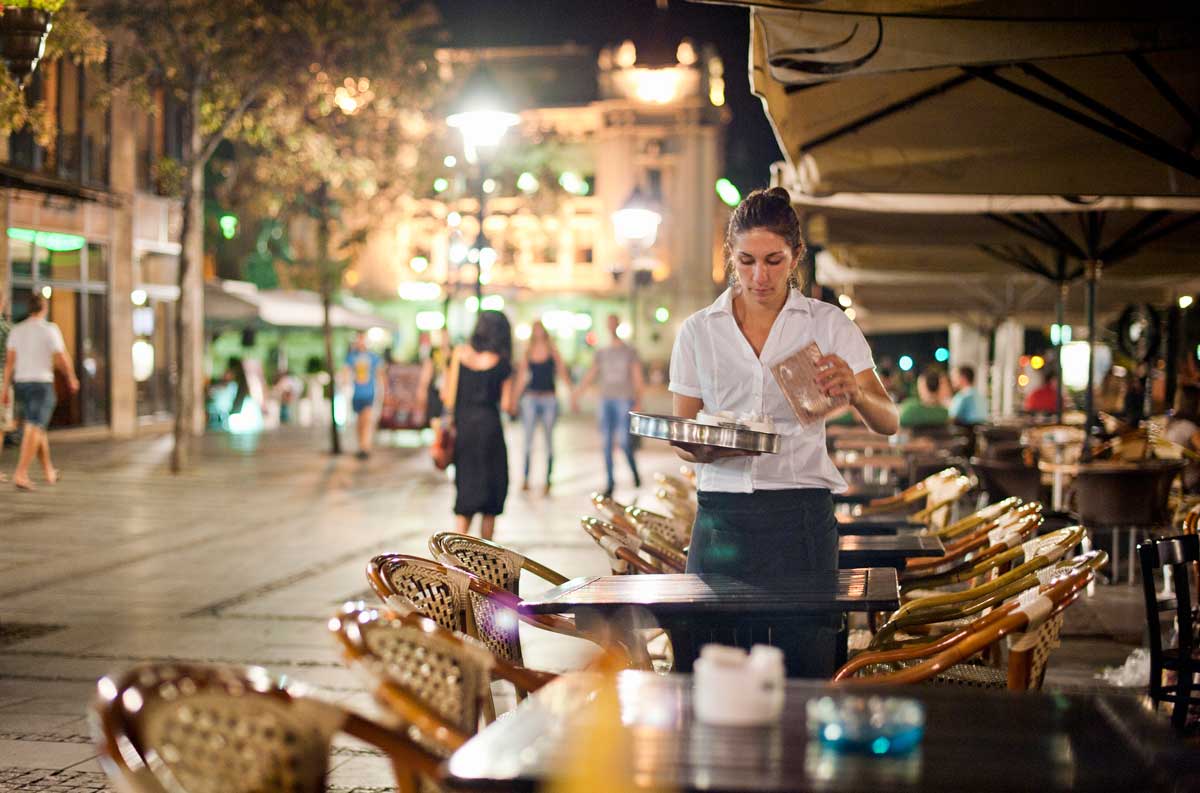 A few days ago, my eyes fell upon an online post discussing recent studies that showed how unpredictable work schedules in low-wage industries, especially food and retail, are really bad for families. The article highlighted that some practices, such as last-minute notices, on-call shifts, irregular and/or variable work schedules, etc., which are common in many industries in the U.S., harm workers, especially women who care for children.

My colleague, Senior Research Scientist Sumru Erkut, Ph.D., and I had just written about that same topic, as we continue to explore cross-industry relevance with our recent study on women’s leadership in the theater field. Through our interviews, surveys, and conversations at conferences, women had shared with us the challenges they faced in their lives when they wanted to rise to a leadership position in the theater. Our piece, published in Harvard Business Review, showed how some of the theater field’s practices, such as unpredictable scheduling of rehearsals and auditions, the 70-hour tech weeks before a show goes live, and extensive travel demands to get national visibility, all require work-life balance provisions that most workplaces currently have not yet put in place. 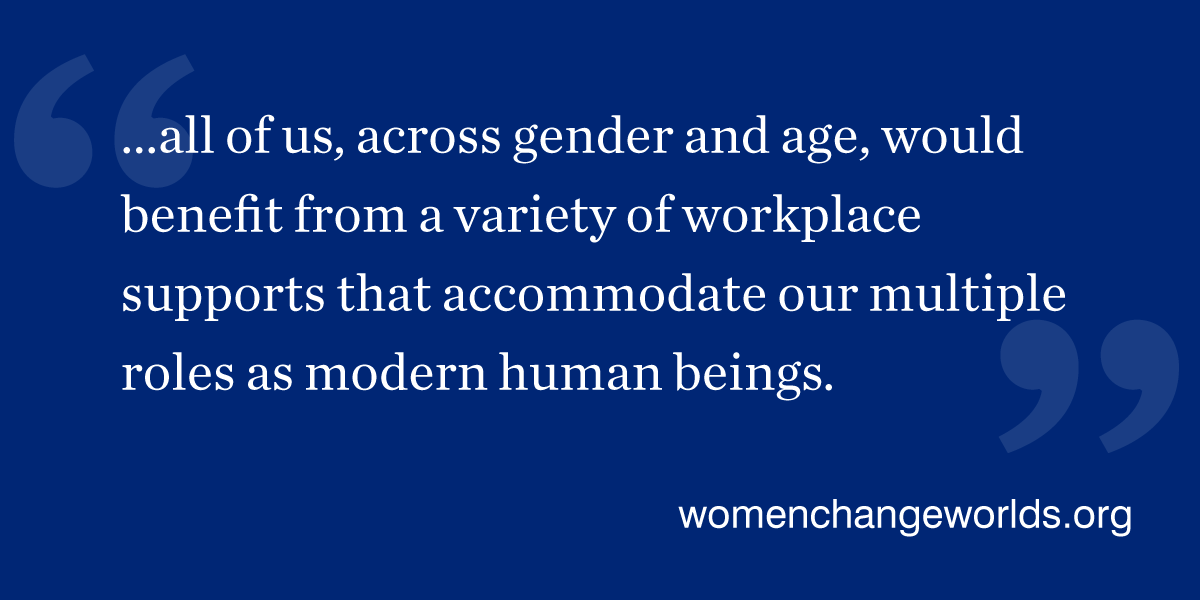 Even in this 21st Century, we have not yet come to accept that parenting is a shared component of our human condition. Every industry employs parents who are trying to balance their work obligations with their family roles. In fact, even non-parents can be called into a caregiving role, for example when their ageing parents need help. Gone are the days when a two-parent family could live on a single paycheck and when family roles were clearly divided. Therefore all of us, across gender and age, would benefit from a variety of workplace supports that accommodate our multiple roles as modern human beings.

The business argument for implementing work-life balance policies is fairly clear: these supports will help us stay better focused on our jobs’ priorities and be more productive, because we will be assured our home life is protected while we work. And, these policies will go further than just supporting us while we care for others. I remember the story a theater-study interviewee shared of how a policy change in one particular theater to make schedules a bit more predictable was received with gratitude by non-parenting colleagues: they now could more easily schedule every-day necessities, like medical or dental appointments.

Even though women and their allies have been calling for changes in workplace policies for decades -- and while some were indeed made -- we still have quite a way to go.

In the U.S., parental leave is still largely unpaid, financially penalizing those who start a family, and partially causing the gender pay gap, which becomes a lasting disadvantage for women’s economic security. Once past the period immediately following the birth of a child, working parents still face several more hurdles to be able to balance their family and their work obligations. Not only is the cost of good quality care astronomical, child care centers or other child care providers are organized along schedules that may not align with those of parents who need access to that child care. Public schools are equally uncoordinated with parents’ employment reality. Many workers have weekend duty or work overnight shifts, again most often in lower paying industries. However, there are almost no providers that take in children over the weekend or for overnight care, and most organized care requires a family to enroll with a predictable schedule for an extended period of time.

Thinking back on the findings in our women’s leadership in theater study, we identified that the hurdle to upward mobility among caregiving women is not the lack of a mother’s ambition or her creativity toward addressing those roadblocks, but rather the virtual absence of any workplace provisions. Indeed, women are just as intentional and strategic about their upward mobility as men are, and just as ambitious for that top spot. But, because caring for others, especially for children, is still predominantly a woman’s job, a working mother faces discrimination, lack of willingness to make any adjustments, and forced invisibility, expressed in statements like “I don’t think [women] aspire for that type of leadership role given their family situations,” which we heard in our theater study.

This mothers’ day, let’s honor all mothers in our lives in two ways. First, let’s pledge to share caregiving responsibilities equally in our homes, not just for that one Sunday, but for the rest of the time our loved ones need support. And second, both respect working mothers’ second shift as much as we do her employment contributions, and help advocate for change in policies at work to make that second shift easier to coordinate for all working parents. Showing children how families can be built with intentional gender equity is a crucial gift to our society’s future parents. Indeed, when our children in turn become leaders, their belief in work-life balance provisions will inform their future company policies toward fairness.

Ineke Ceder is a research associate at the Wellesley Centers for Women at Wellesley College, where she has been involved since the 1990s on projects that focus on race/ethnicity, sex education, child and adolescent development, and women's leadership. Her work described above is based on the research she conducted with Sumru Erkut, Ph.D., on women's leadership in theater.