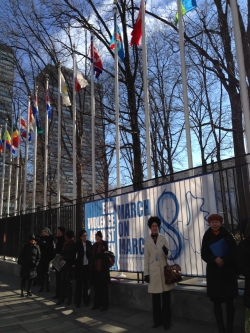 It’s International Women’s Day, and I’ve spent the last week attending the annual meetings of the United Nations Commission on the Status of Women (CSW) – for the first time. As a starry-eyed youngster who used to collect pennies for UNICEF every Halloween when other kids were collecting candy, I always dreamt of being involved with the U.N. in some way. Now, here I am, representing the Wellesley Centers for Women in its capacity as a nongovernmental organization (NGO) with consultative status at the CSW under the banner of the U.N.’s Economic and Social Council (ECOSOC). It has been an eye-opening experience – one filled with a mix of awe and inspiration, counterbalanced by a healthy dose of critical reality checks.

My week began at the opening session of this 57th CSW, which was presided over by Her Excellency Madame Marjon V. Kamara, Ambassador of Liberia to the United Nations and Chair of the CSW, newly re-elected for a second term. The priority theme of this year’s meetings is “Elimination and Prevention All Forms of Violence Against Women and Girls.” During the opening session, high-level statements were offered by a representative for the Chair of ECOSOC, who acknowledged that gender-based violence must be eliminated completely, and the Deputy Secretary-General of the U.N., who argued with some passion that ending violence against women is a matter of life and death and that we must channel our outrage into action. The highlight of the session was a speech by Michelle Bachelet, Head of UN Women and former president of Chile, who informed us that the 57th CSW, with its many country representatives as well as over 6,000 registered NGOs, was the largest-ever convening on the topic of ending violence against women and girls (VAWG). As such, she indicated, it represents an historic opportunity to take responsibility for ending violence against women and girls. Although I enjoyed these august speeches from the glamorous environs of the overflow room, having arrived a day too late to garner a coveted ticket to the U.N. General Assembly Hall, their messages stuck with me and set the stage for the rest of the week.

The 57th CSW continues for another week, but today – International Women’s Day – is my last day here. On this day, there are festive celebrations and commemorations that will break up the grind of the regular daily meetings, which cycle between three-hour long sessions of 10-minute country reports, day-long in-and-out “informal” conversations (where the real work of negotiation gets done), “official” CSW side events, and “unofficial” NGO parallel events. As I prepare to depart, I find myself reflective with regard to the events of the week. Three themes in particular are holding my attention: First, is a global consensus finally emerging around issues related to women and girls, particularly with regard to ending violence against women and girls and more generally with regard to the theme of gender equality? Second, what will the post-2015 global development agenda look like? Although ending VAWG is the official theme of the 57th CSW, there has been a great deal of discussion around what will happen after the Millennium Development Goals expire in 2015 – and this theme will serve as the centerpiece of the next two CSW meetings, in 2014 and 2015. Third, what role do civil society organizations (CSOs) – particularly those, like ours, that are feminist, womanist, or woman- or girl-centered – play in advancing women’s and girls’ issues, at the U.N. and beyond? A recent article in the Stanford Social Innovation Review suggests that, with regard to some issues (such as ending VAWG), the role is indeed great. This gives us – as people who work at, stand with, or support WCW, a CSO with a longstanding reputation for high-quality research, innovative theory, and influential action programs – even greater impetus for all we do.

All next week, I will continue blogging about these themes as I track the progress of the CSW to its final conclusion on Friday, March 15th. My trip to the CSW – a first, but certainly not the last – has been productive and illuminating. Yet, it has also introduced me firsthand to the “realpolitik” of advancing justice and wellbeing for women and girls around the world. Since such change is WCW’s reason for being, I look forward to dialoguing about the issues.

Great post. Last year was my first year to attend the UNCSW event. This year I'm going back and helping to host a parallel event. Are you going to attend this year? I'd love to talk briefly.

0 Cancel Reply
Great post. Last year was my first year to attend the UNCSW event. This year I'm going back and helping to host a parallel event. Are you going to attend this year? I'd love to talk briefly.
Cancel Update Comment
1
Is A Global Consensus Emerging on Women’s Issues?
In quest for equity, sports and combat are sisters