Is A Global Consensus Emerging on Women’s Issues? 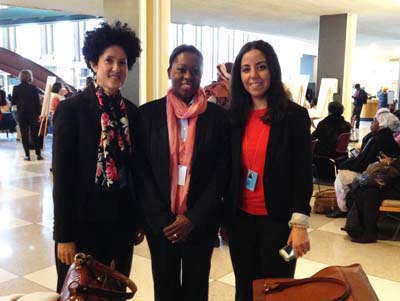 As we hurtle towards the conclusion of the Millennium Development Goals (MDGs) in 2015, some of which have more or less been met and others of which remain very far from target, there seems, at least based on the most recent United Nations on the Commission on the Status of Women (UN CSW a/k/a CSW57) meetings, to be something of an emerging global consensus about women’s issues.

First, there is now a nagging sense that eradicating violence against women and girls (VAWG) is “the missing MDG.” In fact, Michelle Bachelet, the Director of UN Women, stated this forcefully in her opening remarks at the 57th UN CSW last Monday. “Ending violence against women is the missing MDG that must be included in any new development framework. We need a stand-alone goal on gender equality with gender mainstreamed across all other goals.” Bachelet’s statement also indicates a growing international consensus around women’s empowerment and gender issues more generally.

The fact that the authors of the MDGs didn’t think to include ending VAWG as a global development objective both highlights glaring flaws in the process that produced the MDGs in the first place and sets the stage for greater inclusiveness and attention to women’s issues, especially the eradication of VAWG, in the probable “next” global development model, currently being referred to as the post-2015 development agenda or framework. This emerging framework was the subject of a UN CSW parallel session called “The Post-2015 Development Agenda: What’s at Stake for the World’s Women?” This session was sponsored by the Post-2015 Women’s Coalition, self-billed as “a coalition of feminist, women’s rights, women’s development, grassroots and social justice organizations working to challenge and reframe the global development agenda.” The panelists noted that the MDGs were created through a process that was less than consultative and that women came late or not at all to the conversation. In contrast, the post-MDG process is proving to be highly and purposefully consultative – perhaps too consultative, as some have only half-jokingly suggested – and there is a sense that women and women’s issues must be prominent and interwoven in terms of both process and content.

Second, it has become clear that eradicating VAWG specifically and gender equality more generally are preconditions of success for virtually all other planks of global development. Feminists, take a bow, because intersectionality-–the concept that both social identities (such as sex, race, and class) and social oppressions (such as sexism, racism, and classism) are interlocking, co-constitutive, and co-relative – was all abuzz in these discussions. It is fair to say that no one at this conference would argue that the next development model can proceed without fundamentally acknowledging the intersecting nature of all social inequalities and articulating the principle of gender equality as a necessary premise of all global development. My sense was that, all lingering controversies aside, maybe we’ve actually reached global tipping point with regard to recognizing the principle of women’s equality and the principle of the unacceptability of violence against women and girls. But, of course, principles alone do not a reality make.

At the meeting, there has been well-articulated recognition that not only are all women’s issues intersectionally interconnected with all other development goals, but also that, because of intersectionality, development models must disaggregate the experiences of different groups of women (and men, indeed, people of all genders) with regard to the various development goals. UN-level, country-level, and NGO-level speakers acknowledged at this meeting that global targets and even country-level targets are insufficient because they often fail to capture the very different experiences of diverse populations within a country. On a more 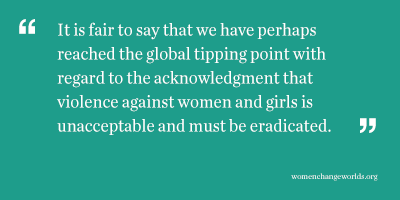 pragmatic level, it was pointed out that the statistical apparatus which will make disaggregation of data possible on global or country-level indicators remains to be designed or put into place.

For example, with regard to MDG 3, which aims to eliminate gender disparity in primary education, urban and rural girls or girls from different socio-economic statuses or racial or religious backgrounds within a country often achieve educational parity at different rates and face different constraints in the achievement of access to primary education. With regard to MDG 5, which involves reducing maternal mortality and increasing access to reproductive health resources for women, similar differences among women evince but are not currently well captured in the indicator data. Thus, speakers have argued, development goals must have quantitative (“this many”) as well as qualitative (“this well”) targets to address the real needs of sustainable human development. It is pertinent to note, however, that NGOs play a crucial role in the provision of the needed data that show these kinds of differences--both quantitative and qualitative--and helping to define the meaning and causality of the differences in outcomes. Women’s research centers, take heed!

Thus, there was evidence during my week at CSW57 that a global consensus on women’s issues is emerging. It is fair to say that we have perhaps reached the global tipping point with regard to the acknowledgment that violence against women and girls is unacceptable and must be eradicated. Additionally, we have perhaps achieved global consensus about the value, although maybe not the particulars, of women’s empowerment, at least at the level of state actors. There are of course, cautions. This consensus does not imply that nations, cultures, and subcultures are in agreement about what women’s empowerment means or looks like, or about the frameworks to use when creating rationales for eradicating VAWG. Stark religious differences have been in evidence at CSW57 as they have been at virtually all UN meetings pertaining to women and gender, and lines of conflict and contestation still run deep. Similarly, regional differences have been in evidence, particularly, for example, between the countries of the European Union and some Middle Eastern nations. I also observed interesting differences between countries with high populations of recognized indigenous people (in Latin America or the Pacific Islands, for example), and nations whose populations are more uniformly non-indigenous in self-characterization.

Thinking about the loss of Elijah Cummings th week from Congress, the reminder of one who practiced what he preached is how difficult it is to live “the Golden Rule” he learned, and brought to all of his duties. Great men are always sorely missed, and much admied, and respected.

0 Cancel Reply
A formula found! Thinking about the loss of Elijah Cummings th week from Congress, the reminder of one who practiced what he preached is how difficult it is to live “the Golden Rule” he learned, and brought to all of his duties. Great men are always sorely missed, and much admied, and respected.
Cancel Update Comment
1
On International Women’s Day: How Do We Get Girls ...
Missive from the 57th UN CSW