In quest for equity, sports and combat are sisters 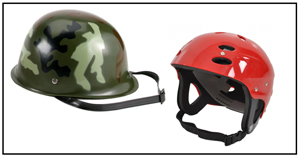 How perfect that National Girls and Women in Sports Day (who invented this cumbersome name?) arrives as the military prepares to lift it’s ban on women serving in combat.

The barriers that women have faced to such service sound like the battle for equal access and treatment in sport.

Just step back and consider that the barriers, the arguments against women have focused on three central ideas (the three “I’s”): the presumption of women’s physical inferiority, the perceived immorality of women serving alongside men, and worry that women would be injured.

Drop those three I’s onto sport and those arguments – inferiority, immorality, and injury – have been the rhetoric used to limit and bar women from equal access to competition, whether it was 1970s Little League or ski jumping (finally to be included in the 2014 Olympic games).

In many countries, girls and women still do not have access to regular sports participation. In many urban areas, strapped families do not value or can’t afford to let daughters play sports.

This is not merely a problem of fitness, but of political, social, and economic equity. Sport is not just about play, but about parity.

When President Roosevelt signed the G.I. Bill of Rights on June 22, 1944, the official text of his public statement recognized “service men and women” in the opportunity to resume training and education. Reality looked different. Even women who flew B-26 Marauder medium bombers on service missions could be declared “nonveterans” and made ineligible for benefits. Many in that generation of women didn’t get the government-funded college education they earned.

Women have been serving on the front lines. As the battlefield has become less clearly defined with danger available at most pay grades, it is time for women to have the same access to assignments and the economic and career benefits that come with combat-level commissions.

There is grumbling. Worries about sexual harassment (immorality) fail to recognize that half of the assaults are against men. That’s a problem of unacceptable behavior, not of gender. Injury? Unfortunately, women are already getting injured and even dying — alongside men.

The physical inferiority piece is more interesting. It raises questions of physiological differences and the relevant question: What do you really need to be able to do, physically, to perform? 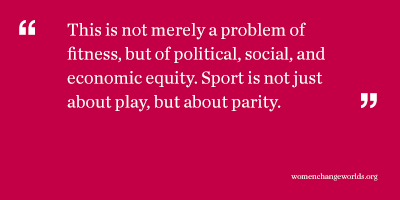 In a recent NY Times story exploring how military fitness tests will change with the new admission of women, we learn that those are all under review. But Greg Jacob, former commander of the training school for enlisted Marines at Camp Geiger, N.C. points out that he saw women who couldn’t complete two pull-ups be able to pump out eight in a matter of months, “because they were training to that standard.”

Females have never before trained for combat. Just imagine what it will mean to have women push themselves physically to a new level. Remember the surge in performance following women being allowed to run the marathon?

Come to think of it, equal access to combat may be just the thing to bring women’s athletics to new heights.

Laura Pappano is writer-in-residence at the Wellesley Centers for Women at Wellesley College, and an experienced journalist who writes about education and gender equity issues in sports. This post is courtesy of her blog, FairGameNews.org.

No comments made yet. Be the first to submit a comment
Missive from the 57th UN CSW
Mentoring, Sports, & Girl Athletes