The Greying of the LGBTQ Community 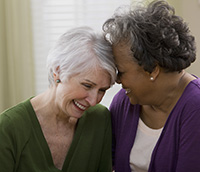 October was LGBTQ History Month. We should continue to celebrate, reflect, and get back to work!

It has been less than 50 years since Stonewall, the start of the current LGBTQ Rights Movement. There have been trials and tribulations, along with celebrations. Today, over 30 states grant same-sex couples the right to marry legally. Today, social acceptability has permeated society (Pew Research Center, 2011). Today, groups, businesses, and academic institutions supporting LGBT rights and LGBTQ youth, all with the message of equity and equality, have increased exponentially (HRC, 2014). Curriculum teaching about inclusiveness is making schools safer and more hospitable than they were even 5 years ago.

These accomplishments are certainly remarkable considering a mere 50 years ago homosexuality was considered a mental disorder. Gay people feared getting fired from their jobs and, often, only a suspicion of homosexual behavior was enough. Religions condemned homosexuality as an abomination, an affront to the natural order of things. And AIDS meant social isolation and certain death.

With so many improvements in equality and rights for LGBTQ communities since Stonewall, one might wonder what else there is left to do. One area that is unaddressed and under-researched is the challenges LGBT elderly people face. More than six million LGBTQ individuals will be in the “65+” age bracket by 2030 (SAGE, 2014). This, of course, provides some trepidations -- and opportunities—for LGBTQ communities, policymakers, and the general population. 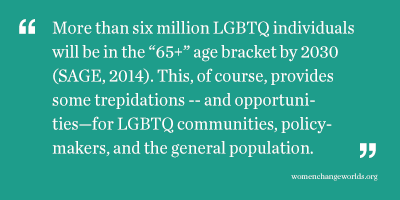 In the last couple of years, more research has surfaced regarding LGBTQ elderly people, which provides a sobering look at their attitudes and thoughts about aging. The first and obvious concern is aging in a society and community that places a high value on youth, leaving the elderly feeling useless and insignificant (Fox, 2007). This is both within the LGBTQ communities and in the general population. Ageism is pervasive in the U.S.

The second concern is discrimination or perceived discrimination at long-term facilities and healthcare institutions. SAGE (2014) reported 40% of lesbian and gay elderly people do not tell healthcare providers they are homosexual, and healthcare providers just assume they are heterosexual. Moreover, in long-term care settings same-sex couples are denied same-space living arrangements more often than heterosexual couples (Stein, Beckerman & Sherman, 2010). In other words, heterosexism entitles you to live your life with your significant other, especially in the final years.

A final concern is that LGBT elders worry about financial insolvency more often and believe they will not be able to retire or will outlive the meager retirement savings they have. In addition, current retirees have lived through years of employment discrimination (SAGE, 2014). Even today, there are still some states that don’t ban discrimination on the basis of sexual orientation in their employment discrimination laws (HRC, 2014). About 15% of LGBT women and men 65 or older live in poverty, compared to only 10% of heterosexual men (Table 4; Badgett, Durso, & Schneebaum, 2013). In couples over 65, female same-sex couples are almost twice as likely as heterosexual couples, or male same-sex couples, to be low-income, reflecting the double impact of women’s lower earnings compared to men(Table 9; Badgett, Durso, & Schneebaum, 2013).

October’s LGBTQ History Month is about celebration, reflection, and work. We should celebrate that elderly couples are now, legally, entitled to their married spouses Social Security benefits when one spouse dies. Moreover, we should celebrate that the Affordable Healthcare Act is providing many people, especially transgender older adults, with needed healthcare. Finally, we should celebrate that LGBTQ issues are being discussed and acknowledged with the federal, state, and local agencies. In the span of less than 50 years, LGBTQ communities have gone from despised to celebrated and are seen as important members of the global community. Reflection comes as we realize there is more to be done to truly create equality for all members of society.

Let’s get back to work. We need to call members of Congress and demand that they pass the Older Americans Act (the premier elder care law) with LGBTQ elders added to the definition of vulnerable populations. We must call on state and local decision makers to pass anti-discrimination laws and create new minimum wage laws, so that pay is equalized for males and females, LGBT and heterosexual, gender conforming or nonconforming. Furthermore, let’s do what we do best, continue to initiate meaningful discussions on heterosexism, sexism, and ageism.

Brian Fuss, M.P.A., a Research Fellow at the Wellesley Centers for Women at Wellesley College, is working on his doctorate in Public Policy and Administration. The working title of his dissertation is Public Policy Recommendations for Florida’s LGBT Elderly Population Residing in Rural and Suburban Areas.

No comments made yet. Be the first to submit a comment
2014 Round-up
Seeking LGBT Parents in History