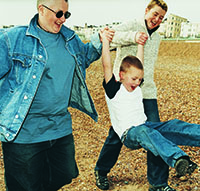 Opponents of LGBT equality often try to make LGBT parents seem like a new and untested phenomenon, and therefore something to be avoided. The history of LGBT parents and our children, however, goes back further than one might think.

The Greek poet Sappho, whose island home of Lesbos gave us the term “lesbian,” may have had a daughter named “Cleis.” That would mean that the history of LGBT parents goes back to around 600 BCE.

The existence of her daughter is only attested through a few fragments, though, making it far from certain. It’s also anachronistic to apply modern identity terms to historical figures, even such a lesbian icon as Sappho. The possibility of her existence, however, should encourage us to reflect that the history of parents who fall under a broad LGBT umbrella (not tied to modern conceptions of the terms) likely goes back as far as the history of LGBT people as a whole. They may not have been “out and proud” like many modern LGBT parents, but we can still see them as their forebears.

Sticking with better documented cases, Oscar Wilde was the father of two boys with his wife Constance Lloyd, and apparently a loving one. His son Vyvyan, in his book Son of Oscar Wilde, wrote about Wilde’s relationship with him and his brother, “He was a hero to us both. . . . a real companion to us. . . . He would go down on all fours on the nursery floor, being in turn a lion, a wolf, a horse, caring nothing for his usually immaculate appearance.” Alas, when the boys were eight and nine, their mother took them to Switzerland after Wilde’s trial for “gross indecency” (having same-sex relations) and they never saw him again. 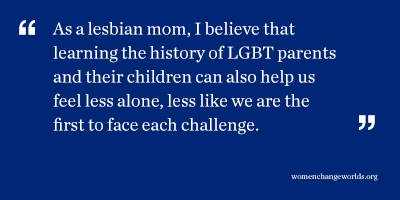 Vita Sackville-West had relationships with several women, including fellow writers Virginia Woolf and Violet Trefusis, and had two children with her husband, Harold George Nicolson (who also had same-sex relationships). Her son Nigel Nicolson later used her account of the affair with Trefusis as the heart of a book about his parents, Portrait of a Marriage. There, he called his mother’s description of the affair “one of the most moving pieces that she ever wrote.” While he acknowledged both parents’ same-sex relationships, he also said their marriage “became stronger and finer as a result.” Their love affairs were mere “ports of call,” but it was “to the harbour that each returned.” Nevertheless, it is easy to see Nicolson as the product of parents who fall under the broad LGBT umbrella, and to place another brushstroke in our picture of LGBT family history.

Looking only at parents who had a more modern sense of their LGBT identities, out LGBT parents go back to the very start of the LGBT civil rights movement. Most still had their children within the context of different-sex marriages, but were more likely than in earlier times to leave those marriages, even though this often meant losing custody of their children. Del Martin, one of the founders in 1955 of Daughters of Bilitis, the first national lesbian rights organization in the U.S., was one such parent. Not surprisingly, her organization held some of the first known discussion groups on lesbian motherhood—way back in 1956. (See Daniel Winunwe Rivers’ Radical Relations, which I reviewed in the Women’s Review of Books earlier this year.)

Even the term “gayby boom”—referring to same-sex couples starting their families together—is already over two decades old, dating to at least March 1990, when Newsweek reported, “a new generation of gay parents has produced the first-ever ‘gayby boom.’” That means that many of the children from that boom are themselves now adults—while many of the first generation of out parents are becoming grandparents.

Think of it this way: the fictional Heather who had two mommies was in preschool in Lesléa Newman’s classic 1989 children’s book. If she were real, she’d now be in her late 20s.

Those who continue to insist that LGBT parents are not good for children have failed to realize that if that were true (even leaving aside the extensive social science research to the contrary), there would be many more maladjusted adults running around. Analyses from UCLA’s Williams Institute have found that currently, between 2.3 and 4 million adults have an LGBT parent. If they suffered harm because of that, someone surely would have noticed the connection by now.

As a lesbian mom, I believe that learning the history of LGBT parents and their children can also help us feel less alone, less like we are the first to face each challenge. Having confidence that others have succeeded before us can translate into confidence in our parenting skills, which in turn can positively impact our children.

Knowing the struggles—and triumphs—of LGBT parents in the past can also give us hope and strength in overcoming the challenges—legal, political, social, and emotional—that we still face.

And seeing how the early organizations for LGBT parents helped shape the overall LGBT rights movement of today (a story told in Rivers’ book and in the 2006 documentary Mom’s Apple Pie: The Heart of the Lesbian Mothers’ Custody Movement) can inspire us to keep contributing to that broader effort, even as we balance the demands of work and family.

LGBT History Month for this year may be drawing to a close, but the work of exploring our history must continue.

No comments made yet. Be the first to submit a comment
The Greying of the LGBTQ Community
Let's Talk about Sex

More posts from author
May 28, 2020 Now More Than Ever, Title IX Coordinators Need Greater Institutional Support
May 19, 2020 A Research Internship that Expands Horizons
May 06, 2020 Research Connections: A Student Teacher’s View on Social Media in the Classroom