Yesterday the Supreme Court ruled that denying recognition and benefits to same-sex couples is unconstitutional. Gay and lesbian couples who are legally married (they are able to do so in 12 states and the District of Columbia) will be able to take advantage of such benefits as tax breaks and pension rights that are available to other married couples. Further, legally married same-sex couples will have the same immigration rights as heterosexual couples. Reflecting on the Supreme Court’s ruling, I am reminded of the research study my colleagues and I launched in May 2004, when the Supreme Judicial Court of Massachusetts’ decision went into effect, making Massachusetts the first state to legalize same-sex marriage. 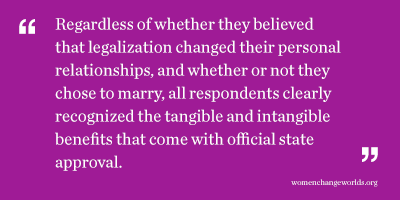 My colleagues and I interviewed 50 same-sex couples in Massachusetts and their children. Some of the couples had chosen to get married and some had not. Whether or not a given couple chose to marry, they talked about the importance of the legitimacy and the recognition the change in the law offered them. Their sense was that when legal marriage is available to same-sex couples, the ramifications stretch far beyond the couples themselves. Perceptions of families, co-workers, neighbors, and strangers shift toward greater acceptance.

Rod* (married, in a 27-year relationship) put it this way:
It has been an amazing experience. I do feel in some fundamental way that it has changed me in the sense of legitimizing me… I always used to say, I’m married, but it wasn’t real. And now it’s real, you know? It’s real, real. You know? I mean it’s like legal real. In that way I think it fundamentally changes the way I approach the world. You know? It’s like, “Are you married?” “Yeah!” And it’s your problem to figure out who it is that I’m married to, or whether this is a straight marriage or a gay marriage or whatever. And I’m extraordinarily grateful for the opportunity to do that.

Regardless of whether they believed that legalization changed their personal relationships, and whether or not they chose to marry, all respondents clearly recognized the tangible and intangible benefits that come with official state approval. These included access to family health insurance, legitimacy for second parents, and next-of-kin status in medical contexts. The issue of medical access, privileges and decision-making was specifically mentioned by a number of families. Linda and Sally, a couple who had been together for 24 years, described the importance of a marriage license for their family’s legal protection:

Linda: Well, I honestly feel like, not to be unromantic but, the marriage part was really just the medical benefits and that sort of the financial and…
Sally: Get the piece of paper.
Linda: Right and, just the things that help the family in a time of crisis.

Ada, a married woman in a five-year relationship described the transformation from a cautious to a secure position with respect to her family and their public entitlements:
If we didn’t have a legal marriage, I would feel like I was constantly on the defensive about what should I do, how I should do it and… And instead I’m able to take a much more assertive stance and be able to advocate for the family in a way I didn’t feel like I could have before, because I didn’t have anything behind me to do it.

Other respondents shared similar sentiments, identifying a sense of “safety” or protection that comes as both a formal and informal benefit of legalized marriage:

Jaidyn (married, in a ten-year relationship), said,
To be legally validated and whether or not someone likes it, we’re married. They can’t say ‘Well, that’s not real’. I think there was a feeling of safety that would come along with the legal marriage. …We were very safe in our relationship with one another, in our lives, but [now we have] safety from people who might want to deny us our civil rights.

Despite the real benefits and protections that came to same-sex couples in legalized unions in Massachusetts, the federal Defense of Marriage Act (DOMA) was repeatedly mentioned by study participants as a source of unequal financial burdens on couples who chose to take advantage of the availability of family benefits that were state but not federally recognized.

Leo, a married man in a 27-year relationship, described the dilemma confronting many couples in the study as they contemplated taking advantage of the new opportunity to put a same-sex partner on the other partner’s family health insurance plan.
Even though I could bring him under my health insurance, I would have to pay a tax on the contribution the state of Massachusetts--because I was a state employee. So [the contribution that] the state of Massachusetts makes towards his health insurance, I’d have to pay a tax on that. That’s a considerable amount, because the state pays seventy-five percent of the insurance. So … there are still some penalties that same-sex couples face that opposite sex couples don’t.

Yesterday the U.S. Supreme Court has lifted the penalties and unequal burdens. We rejoice.

[*The quotations in this piece are from “What I did for Love, or Benefits or…: Same-Sex Marriage in Massachusetts,” by the Same-Sex Marriage Study Group, Wellesley Centers for Women. Names of the study respondents have been changed. The paper can be downloaded for free through July 2013: http://www.wcwonline.org/pdf/paid/422.pdf . In addition to the WCW Working Paper, you can also download this publication from the study: "Never In Our Lifetime": Legal Marriage for Same-Sex Couples in Long-Term Relationships.

In addition to the WCW Working Paper, you can also download this publication from the Same-Sex Marriage Study: "Never In Our Lifetime": Legal Marriage for Same-Sex Couples in Long-Term Relationships
http://onlinelibrary.wiley.com/doi/10.1111/j.1741-3729.2008.00490.x/pdf

0 Cancel Reply
In addition to the WCW Working Paper, you can also download this publication from the Same-Sex Marriage Study: "Never In Our Lifetime": Legal Marriage for Same-Sex Couples in Long-Term Relationships http://onlinelibrary.wiley.com/doi/10.1111/j.1741-3729.2008.00490.x/pdf
Cancel Update Comment
1
“Having it all,” “Lean in,” or “Work-life Balance”...
Unaccompanied Homeless Youth in Massachusetts, wha...