Is Stress Making Us Sick? 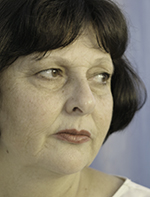 Recently, NPR, with the Robert Wood Johnson Foundation and Harvard School of Public Health, released a poll that found that one-quarter of Americans reported that they had experienced significant amounts of stress in the previous month. That level of stress is similar to levels found in earlier polls. But is this much stress making us sick? The poll found that 70% of people experiencing high levels of stress reported that they were sleeping less--not getting enough sleep can negatively affect health. Other research tells us even more about the possible health consequences of too much stress and our capacity to cope with it. One of the top three sources of stress in the NPR poll, for individuals reporting high levels of stress, was stress from work problems. We know that jobs that are very stressful, with too much to do, can contribute to health problems, but only when those demands or challenges are not offset by the resources and authority to make decisions about the work. In fact, jobs that are very challenging--and in which workers have the authority and resources they need--are good for our health. The bad jobs are those with heavy demands that you can’t address or that never end--or those jobs that have no challenge whatsoever, that involve repetitive or boring work, with no say over what work gets done when. Not surprisingly, in the NPR poll, people in lower-paid jobs, with annual incomes under $20,000, reported more stress from work problems than did those with incomes of $50,000 or more (64% of low-income individuals reported work stress, compared to 57% of higher income people).

Another factor in whether stress makes us sick is whether the stress is chronic or from a single event. Certain life events are very stressful, such as the death of a loved one or divorce; one-in-six people reported that the most stressful event in the previous year was the death of a loved one, and fewer than one-in-ten reported a life change or transition, such as divorce, was the most stressful event. However, ongoing stressful conditions, such as chronic health problems, being a single parent following divorce, or poverty, are more likely to 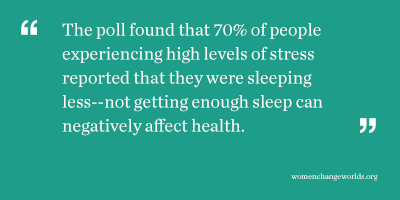 wear away at our health and wellbeing. The NPR poll found that individuals with a chronic illness were more likely to report high stress in the previous month (36% compared to 26% overall), as were individuals living in poverty (36%) and single parents (35%). These chronic stressors tax our abilities to cope with stress. For those individuals with high levels of stress, problems with finances was one of the main sources of stress, and this was especially true for those living in poverty (70% reported financial stress), those with disabilities (64%) or in poor health (69%), and for women (58%, compared to 45% for men). Chronic stress can lead to wear and tear or allostatic load, which can suppress immune function and lead to susceptibility to disease.

The other major contributor to stress, according to the poll, was having too many responsibilities overall. While this can mean different things to different people, it’s interesting to note that women were more likely than men to say that this was one of the reasons they were so stressed in the previous month. One life situation that can give us that overload feeling is combining employment with raising a family. While many men and women find that combination to be beneficial – would you give up your family or choose to stop working? – there are circumstances when the combination can be a negative. Women and men can experience strain from the stresses of too much to do at work and at home. However, because women tend to spend more time in family labor than do men, women with young children and not enough support or resources at work or at home are particularly at risk.

Poverty, bad jobs, too many responsibilities— these can all contribute to poorer health; these stressors are not randomly experienced by everyone, but rather fall more heavily on those with less advantage and opportunity in their lives. In a 2010 review of the latest research on stress and health, Peggy Thoits argued that the greater exposure of members of less-advantaged groups (women, race-ethnic minorities, lower-income and working class individuals) to chronic or high stress was one of the reasons that we find poorer health among women, race-ethnic minorities, lower-income and working class individuals. There are many possible responses to this reality, but central to that must be recognizing the health consequences of high levels of stress and addressing some of the underlying stressors, such as inequality and injustice.

No comments made yet. Be the first to submit a comment
Suicide Prevention: The Depression Link
Child Care and the Overwhelmed Parent

Nancy Marshall, Ed.D. is a Senior Research Scientist and an Associate Director of the Wellesley Centers for Women, as well as an Adjunct Associate Professor at Wellesley College. Learn more about her>>