What Is A Woman Worth?

Are you paid what you’re worth? How much do you earn? Is your paycheck fair?

These are the kinds of questions we don’t talk about in public, or even with co-workers. We might broach them with close friends or family, but many Americans don’t like to talk about whether our paychecks are fair. However, when women earn 77 cents for every dollar a man earns, and this gender wage gap holds at all levels of education, we have to ask what’s at play here. For Black and Latino women, the gap is even greater; Black women earn 70 cents for every dollar earned by men of all races, and Latinas earn only 60 cents.

Perhaps the pay gap is because women “chose” to go into jobs or professions that pay less? Women are concentrated in relatively few occupations, such as nursing, teaching, administrative assistants, health aides, customer service and the like. This concentration of women in a few, predominantly female, occupations does hold wages down, because more women are competing for a more limited range of occupations. However, even when women work in the same occupations as men, they often earn less than the men.

These kinds of arguments about why women earn less than men are grounded in old ideas about what a woman is worth, and about women’s place in the world. When we devalue women’s family and community work, we also devalue the paid jobs that support families and communities, such as teaching and nursing. When we ask whether it's women’s choices that drive the pay gap, we’re ignoring the effects of discrimination enacted by others with the power to hire and fire.

According to the official blog of the U.S. Department of Labor, “Economists generally attribute about 40 percent of the pay gap to discrimination--making about 60 percent explained by differences between workers or their jobs.” That’s right, almost half of the pay gap is attributed to discrimination. Two bills that would address this discrimination are currently in committee and not likely to go further. The Fair Pay Act (S.168, H.R.438) is designed to end wage discrimination by requiring equal pay for comparable work. The Paycheck Fairness Act (S.84, 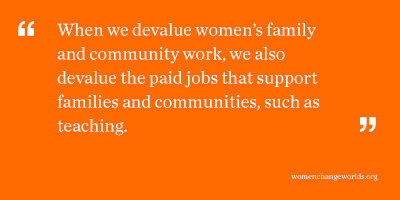 However, we don’t have to wait for Congress to act to address the issue of discrimination and pay equity. As workers, we can start talking to each other about what we earn, and whether we think that’s fair. As employers, we can reconsider the wage structure in our firm, and evaluate its fairness. As citizens, we can challenge the old ideas about what a woman, and women’s work, is worth, and encourage our daughters and sons to not limit their dreams to the old dreams, but to explore a wide range of occupations and follow their own interests.

Nancy Marshall, Ed.D., is an Associate Director and Senior Research Scientist at the Wellesley Centers for Women at Wellesley College. She leads the Centers' Work, Families & Children team and teaches courses at Wellesley College on gender, employment and the sociology of children and youth.

No comments made yet. Be the first to submit a comment
The Best of What We Bring through Sports
Happy Birthday Maya Angelou!

Nancy Marshall, Ed.D. is a Senior Research Scientist and an Associate Director of the Wellesley Centers for Women, as well as an Adjunct Associate Professor at Wellesley College. Learn more about her>>