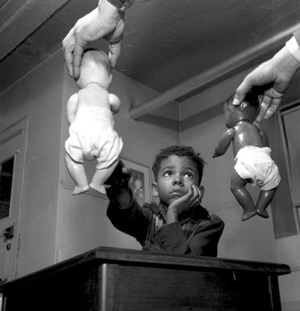 When most people think about how social change happens, the role of social science research probably isn’t the first thing that comes to mind. Yet, our histories of social change, social movement, and social justice have been shaped by social science research that provided crucial evidence to move things along. As head of the Wellesley Centers for Women, the nation’s oldest and largest academic women and gender focused research and action institute, now celebrating its 40th year, I’d like to talk about the role of social science research by women in advancing gender equality, social justice, and human wellbeing by highlighting three studies by women that really made a difference.

In the late 1930s, Mamie Phipps Clark, a masters student in psychology at Howard University, began to wonder about the relationship between school context and racial self-concept in children. She devised a method of testing children’s racial self-concept using, first, black and white images of children and, later, black and white dolls. Using this method, she collected data from children in three kinds of schools--segregated schools (all black children, black teachers), semi-segregated schools (mostly black children, white teachers), and integrated schools (black and white children, white teachers)--in Arkansas and New York City. She found that, in general, black children in all three conditions were more likely to rate the white image or doll as “good” and the black image or doll as “bad”; however, these effects were most pronounced in the semi-segregated condition where all the children were black and all the teachers were white.

This research was later published with her husband Kenneth Bancroft Clark, also a psychologist, as a series of five papers between 1939-1947, during and after the time both were pursuing their Ph.D.s in psychology at Columbia University. These papers became a cornerstone of the famous “Social Science Statement”--a survey of research drafted by Kenneth Clark, Isidor Chein, and Stuart W. Cook, which made the case that segregation is bad for children--black and white. This statement was submitted as an amicus brief to the U.S. Supreme Court in 1952 and was ultimately cited in the landmark Brown v. Board of Education decision in 1954--proving that social science research really does make a difference in social change. 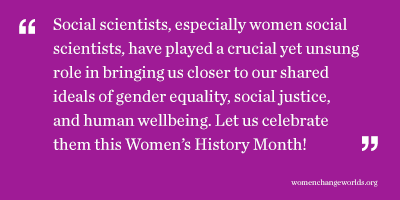 In the mid-1970s, Stanford-based psychologist Sandra Lipsitz Bem began to wonder how she might measure the limiting effects of traditional sex roles. This question had been raised by the women’s liberation movement, as more and more women became aware of--and concerned about--things like the “glass ceiling” and gender wage gap, as well as parenting differentials at home. Bem devised the Bem Sex Role Inventory (BSRI), a quantitative measure of traditional masculinity and femininity, which she published in 1974. Unlike previous sex role inventories, the BSRI allowed researchers to capture degrees of masculinity and femininity within the same person, rather than just rating an individual as either masculine or feminine. In addition, the BSRI introduced a new sex role category: androgyny. This category referred to people--male or female--who scored high in both masculinity and femininity. (People who scored low in both were referred to as “undifferentiated.”) Research based on the BSRI showed that women who scored high on androgyny showed levels of workplace success that were similar to men scoring high in masculinity, while women who scored high in femininity tended to experience more barriers to workplace success. Ironically, Bem was not tenured at Stanford despite many awards for her research, although Cornell subsequently rewarded her with a full professorship. Like Mamie Clark, Sandra Bem contributed to the outcome of landmark civil rights cases, this time in the area of employment. Bem testified as an expert witness in both the 1973 case against the Pittsburgh Press (ending the division of “help wanted” ads by sex) and the 1974 AT&T sex-discrimination settlement (ending many employment practices that discriminated against women). On a broader cultural level, Bem’s work also influenced how children are socialized about gender through books, toys, and television--in particular, widening the options presented to girls. In the long run, Sandra Bem’s research on sex roles helped establish the idea that gender is socially constructed and not merely inborn, expanding our society’s ideas about what it means to be a man or woman and opening up options along the full “spectrum of gender.”

In the mid-2000s, two political scientists--Mala Htun of the University of New Mexico and Laurel Weldon of Purdue University--embarked on a quest to discover empirically what really makes a difference in ending violence against women at the societal level. Examining data from 70 countries collected over four decades, these researchers determined that a single factor makes the most difference: the existence of an autonomous feminist movement within a country. In their provocative 2012 article titled “The Civic Origins of Progressive Policy Change: Combating Violence against Women in Global Perspective, 1975-2005,” these authors showed that “feminist mobilization in civil society” is more strongly correlated with the creation of policies that combat violence against women than any other factor that they measured, including percentage of women in government, activity of leftist parties, or relative national wealth. To quote these authors, “autonomous [feminist] movements produce an enduring impact on VAW policy through the institutionalization of feminist ideas in international norms.” They further state that, “analysis of civil society in general--and of social movements in particular – is critical to understanding progressive policy change.” What this comprehensive study tells us is that, despite the hurdles and setbacks that large-scale social movements inevitably face, they are, in the end, what makes a difference in bringing us closer to equity, justice, and wellbeing. And, on a more granular level, all of the large and small organizations that exist to advance social change within such movements are absolutely essential to achieving the aims we dream of. Htun and Weldon dared to use “big data” to illuminate a reality that common sense alone could not have revealed.

Layli Maparyan, Ph.D. is the Katherine Stone Kaufmann ’67 Executive Director of the Wellesley Centers for Women at Wellesley College.

No comments made yet. Be the first to submit a comment
In Memoriam: Jean Hardisty
Valuing the Ideological Roots of Women’s Athletics