Reflections on the March on Washington 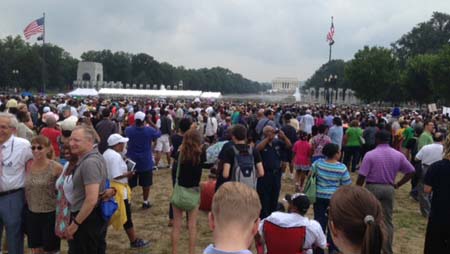 Yesterday I attended the 50th Anniversary of the March on Washington with two members of the WCW staff. We had been in Washington, D.C., for a series of meetings--indeed, we had just met with a liaison to the White House Council on Women and Girls earlier that morning--and we wanted to be a part of this history. The fact that my own mother had been a civil rights activist in the early 1960s was part of my inspiration to attend this event and share in the national moment on reflection on how far we had or hadn’t come in terms of meeting the deeply enshrined American ideals of equality and justice.

During the flight home, as I reviewed the day’s remarks by three U.S. Presidents-- Carter, Clinton, and Obama--vis-à-vis the poignantly articulated and enduring dream of Martin Luther King, Jr., I began to think about a social science perspective on progress towards our shared civil and human rights goals. Of course there are political and philosophical ways to think about achieving equality and justice, but how does the achievement of these ends look through lenses of psychology, sociology, education, or economics, for example?

The work we do at WCW is geared towards social change, yet our methods revolve around empirical social science research. Research not only informs action here, but it also allows us to evaluate the effectiveness of action using evidence. As I mentioned in one of our D.C. meetings, WCW is a kind of “evidence factory”--we are in the business of generating the kind of evidence that shapes effective policy and sound action programs. And it is no accident that, these days, everybody from activists and advocacy groups to philanthropists and Federal funders are seeking evidence that the actions they engage or invest in actually make a difference. Social-change oriented research organizations like WCW are key players in this equation.

Tomorrow, I will post a blog that takes a deeper look at some of the ways that social science research--including work by WCW scholars--informs social justice questions. Over time, I’d like to enlarge this dialogue about the role of research in social change, and I hope you’ll join me by adding your comments and reposting our blogs on your social media channels. By staying in conversation and creating a buzz, together we move the needle on the issues we all care about!

Layli Maparyan, Ph.D. is the Executive Director of the Wellesley Centers for Women at Wellesley College.

No comments made yet. Be the first to submit a comment
Reflections on the March on Washington, Part II
Celebrating Women's Equality Day