This blog post is reproduced with permission from the Robert Wood Johnson Foundation in Princeton, NJ. It was first published on the Human Capital Blog.

If you were stressed out and wanted to vent to your friends about it, how would you let them know? Would you pick up the phone and talk, or text? Would you set up time to grab coffee or go for a brisk walk? Or would you post to Facebook why your day just couldn’t get any worse?

As I logged into the recent RWJF/NPR/Harvard School of Public Health-sponsored Stress in America discussion, I identified with the panelists who were dispelling stereotypes about “highly stressed” individuals being high-level executives or those at the top of the ladder. Instead of finding work-related stress as a top concern, as is often played out in the media and popular culture, the researchers were finding that individuals with health concerns, people with disabilities, and low-income individuals were experiencing the highest levels of stress. The panelists talked about the importance of qualities like resiliency and the ability to turn multiple, competing stressors into productive challenges to overcome, and the integral role of communities in shaping, buffering, and/or exacerbating stress.

We often consider our communities as living, working, playing in close physical proximity. But what about the online spaces? What about our opt-in networked friendship circles ... our cyber-audience who sign up to read our posts with mundane observations, proud revelations, and the occasional embarrassing photos? 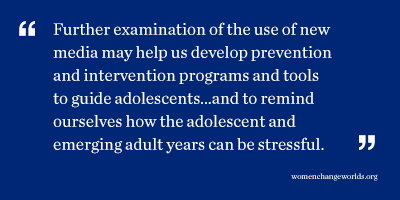 Media coverage about social media has not been kind—often linking its use with cyberbullying, sexual predators, and depression or loneliness. But recent scholarship on new media demonstrates that interpersonal communication, online and offline, plays a vital role in integrating people into their communities by helping them build support, maintain ties, and promote trust. Social media is often used to escape from the pressures of life and alter moods, to secure an audience for self-disclosures, and to widen social networks and increase social capital. The Pew Research Internet Project found that adult Facebook users are more trusting than others, have more close, core ties with their social networks, and receive more social support than non-users.

So what if we asked adolescents the same question: “If you were having a bad day and wanted to let your friends know about it, how would you let them know?”

In our current research on media and identity, we purposively sampled more than 2,300 individuals aged 12 to 25 from 47 states and 26 countries. They took an online survey that investigated how vulnerable populations (such as racial/ethnic minorities, women, adolescents, people who are lesbian, gay, bisexual and transgender, those with low social status) have used the Internet and social media in healthy and unhealthy ways, particularly during times of stress. We wanted to determine how and why supportive communities could exist in personal online networks that could increase one’s resiliency in the face of challenges.

We found that when young people want to talk about a bad day, they mainly preferred in-person (69%), texting (69%), or phone call (51%) methods to reach out for help. Social media was not utilized as often to talk about stressful times—with Facebook (29%) being more popular than Twitter (7%) overall.

The Stress in America poll results found that 19 percent of adults use social media more than usual during stressful times. In our study, adolescents were significantly more likely to post to Facebook networks about their bad days than emerging adults aged 18 to 25, which can indicate that there are generational differences in how new media can be supportive.

African American participants (19%) chose Twitter to report to their networks about a bad day more often, whereas Asian Americans (40%) used Facebook more often than people of any other race/ethnicity during times of stress.

A surprisingly large number of young people (under age 25) reported that they write blogs, from a low of 37 percent of Hispanic respondents to a high of 60 percent of Asian Americans respondents. Incidentally, individuals who have ever written a blog are more likely to report being unhappy or sad than non-bloggers. Perhaps being more public online about private matters helps adolescents to know that they are not alone in their battles with stress.

Further examination of the use of new media may help us develop prevention and intervention programs and tools to guide adolescents, their parents, educators, and health care workers, and to remind ourselves how the adolescent and emerging adult years can be stressful. Perhaps logging onto one’s Facebook community and jotting down one’s thoughts could be just the right kind of coping mechanism whenever the need arises.

Linda Charmaraman, Ph.D. is a research scientist at the Wellesley Centers for Women at Wellesley College and a former National Institute of Child Health and Human Development postdoctoral scholar. She is a Robert Wood Johnson Foundation (RWJF) New Connections grantee, examining the potential of social media networks to promote resiliency in vulnerable populations.

No comments made yet. Be the first to submit a comment
Child Care and the Overwhelmed Parent
Open Circle Training Goes to Uganda