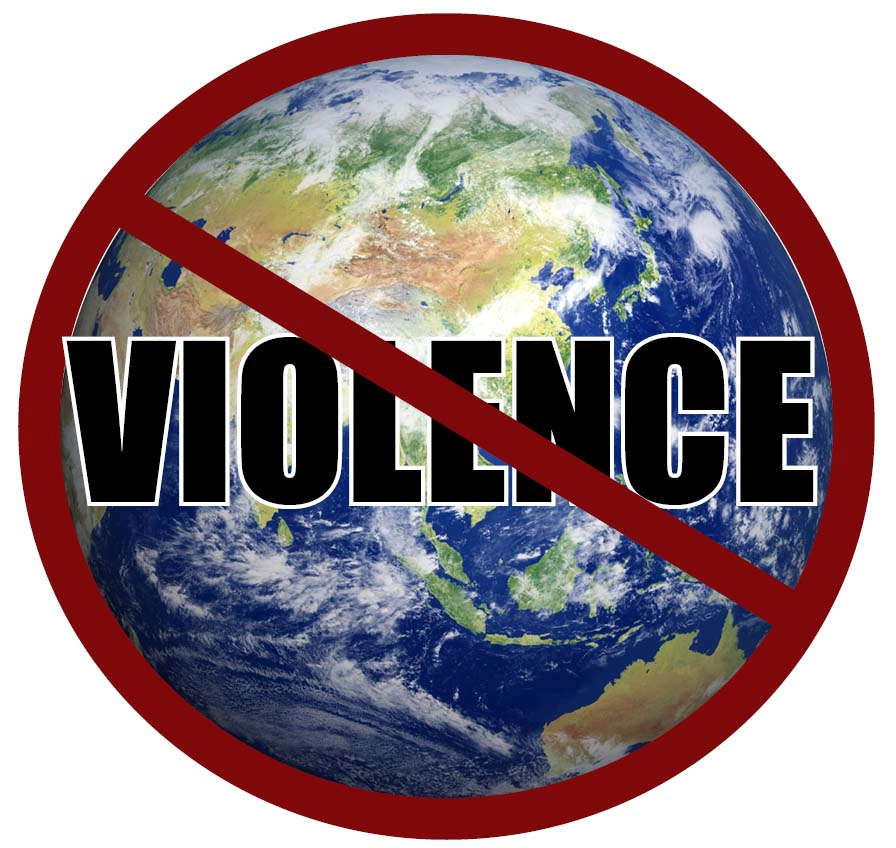 I can’t remember a time when our holiday season was more marred by violence than the one that just passed. Not only did the Sandy Hook Elementary mass shootings take place just days before Christmas (and in the middle of Hanukkah) in Newtown, CT, but there were also at least three other mass shootings in December (Happy Valley, OR, Frankstown Township, PA, and Webster, NY) – two of them seemingly “copycat” affairs. As if this weren’t enough, there were also mass shootings in October (Brookfield, WI), September (Minneapolis), August (Oak Creek, WI, and College Station, TX), July (Aurora, CO), May (Seattle, WA), April (Oakland, CA, and Tulsa, OK), March (Pittsburgh, PA), and February (Norcross, GA, and Chardon, OH) – making 2012 one of the most violent years on record for this kind of horror in the U.S.

In fact, the whole thing became personal for me three days after the Sandy Hook shooting when Sean Louis Callahan – the mate of one of my dear former students and a new policeman only four months into the career of his dreams – was fatally shot in the head and neck after responding to a domestic violence call in a hotel in Clayton County, GA. The perpetrator, who was also fatally shot in that incident, was a previously convicted felon. That a loved one of somebody I care about had to go down to stop such a potential tragedy only fuels my fire for doing something about the normalization of violence that pervades our society.

These mass shootings – as horrific as they are – are just the tip of an iceberg of normalized violence that is taken to extremes when mental health concerns, gun control issues, unresolved social oppressions, gender issues, and even economic insecurity are added to the mix. Taken together, these things are “always already” a powder keg waiting to blow up. Often these things are normalized in ways that keep us from seeing them unless we really look hard.

Over the holiday break, for example, I had a chance to visit Disney World with my family. Primed by recent events, never before had I noticed the degree to which guns are embedded as entertainment everywhere from Frontierland to Tomorrowland. As much as I love Disney World as a fun getaway for multiple generations, I found myself irked by these seemingly “harmless” portrayals of “guns as good” to kids. I also observed the still tremendous amount of normalized sexism presented as entertainment in a theme park that, on one level, appears to valorize women and girls through its emphasis on princesses. Listening to the “Carousel of Progress” – which features a father figure from different historical 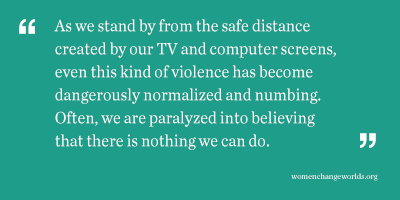 eras cracking jokes at the expense of his wife and daughter, among other things – for probably the fifth or tenth time in my life, I thought, “When is Disney ever going to progress to gender equality (or racial equality, for that matter)?” As someone who grew up in Florida, I love Disney World, and my point is simply some of the sources of violence in our society are “hidden in plain sight.”

Recent cases of gender-based violence, as well as the gendered dimension of recent episodes of violence that seemingly had little to do with gender, remind me that we can never look at violence in isolation. The shooting of 14-year-old girls’ education activist Malala Yousafzai of Pakistan, which I blogged about previously, was an attempt to suppress through violence women’s advancement to gender equality. The recent fatal gang-rape of a woman on a bus in Delhi, India, is an example of sexual aggression, which affects many women all over the world on a daily basis – from the epidemic war rapes of women in the Democratic Republic of Congo to commercial sexual exploitation and rape of women, girls, and boys all over the United States and elsewhere. The 40 million “missing girls” in China reflect a more systemic form of violence that comes from societal bias against women and girls.

We must also look, however, at the ways in which masculine socialization normalizes and even encourages aggression – which, in its most extreme cases (when combined with mental illness, economic marginalization, racial/ethnic/religious hatred, or misogyny, for instance) becomes violence, often horrific violence. Media depictions of gun violence, for example, whether in movies, music, or video games, feed into this masculine socialization by linking guns with “cool” – not just for U.S. men and boys, but for men and boys across the globe. If we stop short of examining these connections because we don’t want to face what we might have to change, we are shooting ourselves in the foot (or worse).

Obviously, violence isn’t just a U.S. thing. Anyone who has been able to sit through the constant stream of gruesome news reports from Syria, for example, has felt gut-level anguish over the seemingly interminable civil conflict there, particularly the wounds – many of them fatal – to innocent children. Violent civil conflicts and other insurgencies are now generating death and devastation in numerous parts of the world, from the Democratic Republic of Congo, Sudan, and Mali to Burma, Afghanistan, northwest Pakistan, Iraq, Mexico, and Colombia. The autumn flare-up of hostilities in the Israel/Palestine region and renewed violence in Egypt added to the somberness of this year’s holiday season. As we stand by from the safe distance created by our TV and computer screens, even this kind of violence has become dangerously normalized and numbing. Often, we are paralyzed into believing that there is nothing we can do.

I write this today because I beg to differ. I truly believe that violence can be eradicated, and that we have the power to make it happen. “You may say I’m a dreamer, but I’m not the only one.” With this New Year, let us resolve to even explore the possibility of ending violence in our world – of truly creating a peaceful and nurturant global society – and to commit to taking the small (and big) steps that will lead us in this direction.

Please join me in 2013, if you care about these issues, by making three commitments:
1) I commit to the belief that we can eradicate violence,
2) I commit to engaging in honest and sophisticated discussions about the causes of violence as well as earnest searches for ways to reduce and eliminate violence, and
3) I commit to taking whatever personal and professional steps I can take to make ending violence a reality, and to work with and support others at home and globally who are doing the same.

One of my favorite quotes is attributed to Milarepa, a one-time murderer who eventually became a Buddhist sage: “In the beginning, nothing comes. In the middle, nothing stays. At the end, nothing goes.” In our efforts to end violence in our world – in our nations, in our neighborhoods, in our homes, and in ourselves – let us commit to a beginning, a middle, and an end, knowing that if we are patient and persistent and creative and compassionate, we will get there.

Yes! Thank you so much for this thoughtful and pragmatic (and womanist) offering. As these occurrences increase to reveal the spiritual crisis of violence, internalized trauma, and inhumanity, there are also the seeds of opportunity; seeds of change sprinkled about. Yes, we can indeed eradicate all forms of violence. Thank you again!

0 Cancel Reply
Yes! Thank you so much for this thoughtful and pragmatic (and womanist) offering. As these occurrences increase to reveal the spiritual crisis of violence, internalized trauma, and inhumanity, there are also the seeds of opportunity; seeds of change sprinkled about. Yes, we can indeed eradicate all forms of violence. Thank you again!
Cancel Update Comment

I do find excellent studying material to suit my views. You did an excellent job with this details.Thanks for the valuable information and insights you have so provided here.

0 Cancel Reply
I do find excellent studying material to suit my views. You did an excellent job with this details.Thanks for the valuable information and insights you have so provided here.
Cancel Update Comment
Mentoring & Girls of Color
Human Rights Month: Women Prisoners

Is A Global Consensus Emerging on Women’s Issues?