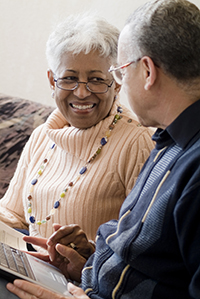 The Dopamine Reward System—Friend or Foe?

Dopamine is trending as the most popular neurotransmitter. And why not? There are days I think it rules the world or at least the day–to-day activities of my friends and family. The craving you have when you smell the coffee brewing in the morning—thank dopamine. That elation you feel throughout your body when you fall hopelessly and deeply in love? Again, dopamine. The thrill of a shopping spree at the mall, the desire for the second and third glass of wine at dinner. You guessed it, dopamine. Dopamine seems to be everywhere giving people a little rush of pleasure and energy when we need it most. So what’s the harm? It’s a natural, biologically based chemical that provides energy and motivation.

The harm is best understood by remembering the infamous rats in Skinner boxes back in the 1950s. Scientists put electrodes into the limbic system (feeling centers) of the rats’ brain and sent a little shock to the area when the rat entered a particular corner. The theory was that if the shock was unpleasant enough it would cause the rat to stay away from the corner. Enough shocks and the rat’s brain would wire the corner with the aversive stimuli. However, a strange and unexpected thing happened when the electrode was placed in the nucleus accumbens (a dopamine pathway that is part of the limbic system)—the rats did just the opposite. Instead of avoiding the corner, they went back to get the shock over and over and over again. Up to 700 times an hour! In fact, this was so compelling to the rats that they opted for the stimulation over food. The rats could not describe “craving “ to us, but certainly, the repetitive nature of their dopamine seeking made it clear that this was something they “needed” to do. The increase in motivation and energy that dopamine provides can be a good thing, but when your brain gets wired to compulsive behaviors that stimulate the dopamine reward pathway (addictions) then your life can be as out of control as the poor rat in Skinner’s Box. 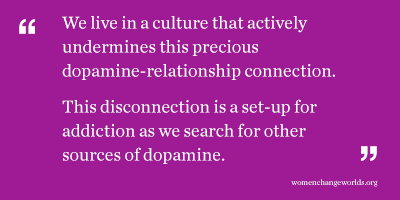 So dopamine itself is not the problem, nor is the dopamine reward system. Dopamine is simply the carrot on a stick designed to give a reward to life-sustaining activities like eating healthy food, having sex, drinking water, and being held in nurturing relationships so that you would keep doing these healthy things over and over again. The problem is how we stimulate the dopamine pathway. In an ideal world—one that understands the centrality of healthy relationship to health and wellness—the dopamine reward system stays connected to human connection as the primary source of stimulation. Unfortunately, we do not live in this ideal world. We live in a culture that actively undermines this precious dopamine-relationship connection. We raise children to stand on their own two feet while the separate self is an American icon of maturity. It is making us sick.

This disconnection is a set-up for addiction as we search for other sources of dopamine. The “other sources” look shockingly similar to the list of common cultural complaints—overeating and obesity, drug and alcohol abuse, consumerism, chronic hooking up. Not only do these addictive, destructive behaviors get paired to the dopamine reward system but they create a feedback loop of isolation that pushes people towards more addictions.

No comments made yet. Be the first to submit a comment
Black History Month Matters: A Personal Reflection
"R" is for Resonance