Amy Banks, M.D. and Layli Maparyan, Ph.D. were featured speakers during the 2015 See the Girl Summit organized by the Delores Barr Weaver Policy center in Jacksonville, FL, in October. Banks presented “The Power of Healthy Connection: Rewire Your Brain for Stronger Relationships” during which she outlined power of healthy connections and introduced attendees to relational neuroscience and the C.A.R.E Program, featured in her book, Four Ways to Click: Rewire Your Brain for Stronger, More Rewarding Relationships, which helps people use their brains to improve their relationships. She also led a discussion, “Neuroscience Can Change Girls’ Lives” with attendees. Maparyan, the author of two groundbreaking books in the field of womanist studies who has published over 30 journal articles and book chapters in women’s studies, Africana studies, sexuality studies, and psychology, presented on “Womanism and Girls” during the opening session.

Banks presented on Four Ways to Click: Rewire Your Brain for Stronger More Rewarding Relationships during the Symposium for the Advancement of Family Therapy and at the Walden Center for Education and Research Third Annual Conference Advances in the Treatment of Eating Disorders: Integrating Research with Clinical Practice, held at Bentley University in Waltham, MA, both in October, and during Beth Israel Deaconness Hospital Social Work Grand Rounds in November in Boston, MA. Also in November, Banks and Judith Jordan, Ph.D. presented “Relational Cultural Theory—Seeing the Forest through the Trees” during the Renfrew Center for Eating Disorders 25th Anniversary Conference for Professionals in Philadelphia, PA.

In October, Linda Charmaraman, Ph.D. presented a poster co-authored by Amanda Richer, M.A., and Allison Tracy, Ph.D., “From early adolescence through emerging adulthood: Exploring differences in social media use by age, race, and perceived social status,” at the inaugural Digital Media and Developing Minds Conference at UC Irvine, CA, sponsored by the National Academy of Sciences. This meeting aimed to identify and report on state-of-theart research on the impact of digital media on children and adolescents, with a particular focus on establishing a dialogue between medical researchers and those in the social sciences who study media effects. Charmaraman also attended a working group that will develop a consensus statement on what is a healthy media diet and help set the agenda for future research.

Charmaraman and her former student Ambar McField (Wheaton College) presented a poster on “Online networking in Black and Hispanic women: Blogging, social justice, and elections” at the 15th annual Diversity Challenge hosted by the Institute for the Study and Promotion of Race and Culture (ISPRC) at Boston College in October. The study demonstrated that Black and Hispanic young people were significantly most likely to have ever written a blog, yet less likely to post online about elections, compared to White and Asian counterparts. Additionally, Black students were significantly most likely to tweet to their friends while watching TV, indicating the salience of social companionship during media use. Also in October, Charmaraman was a participant in the Ninth Annual Research and Coaching Clinic as part of the Robert Wood Johnson Foundation’s New Connections program, held in Chicago, IL. The purpose of this invitation-only Clinic was to increase the visibility and enhance the skills sets of former grantees and potential applicants who are from underrepresented communities. The focus of this year’s Clinic was to work with senior scholars on developing NIH federal grant proposals.

In November, former Wellesley Centers for Women intern Temple Price joined book chapter authors on a panel, on behalf of her co-authors Charmaraman, Huiying Bernice Chan, and Richer) at the National Communication Association conference in Las Vegas, NV. The session and book to be published in 2015 by Lexington Books are entitled, “Women of color and social media multitasking: Blogs, timelines, feeds, and community.” Also in November, Charmaraman gave a talk at the Center for Quality of Care Research (CQCR), BayState Medical Center in Springfield, MA, about her emerging research interests in peer-led online interventions targeting adolescent substance use and relational health.

Sari Pekkala Kerr, Ph.D. presented “Within and Between Firm Trends in Job Polarization: Role of Globalization and Technology” at the International Atlantic Economic Society conference in Boston, MA, in October. This past July, she presented “House Money and Entrepreneurship” at the National Bureau of Economic Research (NBER) summer institute in Cambridge, MA.

In April, Layli Maparyan, Ph.D. presented “A Womanist perspective on human flourishing” at the North Central Sociological Association’s 90th Annual Conference in Cleveland, OH; and “The Womanist Idea” during the Wellesley College Africana Studies Spring Colloquium, and “Womanism: Building inclusion through invitation,” for an Administrative Council Committee for Diversity faculty-staff event, both at Wellesley College, Wellesley, MA. Maparyan presented “Making social change sustainable: Inner and outer strategies” at the William Winter Institute for Race and Reconciliation’s Summer Youth Institute 2.0, at the University of Mississippi, Oxford, MS, in June. She offered the keynote, “Fostering global community from the leadership seat: Some suggestions for women in power,” during the 2015 Anchor Point Conference in Global Leadership, 18 Million Cracks in the Glass Ceiling: Women, Power, and Politics held in Boulder, CO, in August.

Nancy Marshall, Ed.D. presented “Having It All, Combining Work and Family in the 21st Century” in September at the National Academies of Sciences, Engineering and Medicine expert meeting on women’s health issues, held in Washington, DC. The National Academies was requested by the Office of Research on Women’s Health (ORWH) of the National Institutes of Health (NIH) to conduct this meeting to highlight the findings of a National Research Council/Institute of Medicine report on U.S. health in international perspective as they relate to women’s health issues and delve into their implications for health research. The report found that U.S. women’s health was significantly worse than the health of women in many other advanced countries, and it was suggested that it would be useful to develop a follow-on study to drill down on those differences and elaborate their causes. Marshall also presented on the same topic to the Wellesley College community during the 2015 Friends & Families Weekend, also in September. A link to the video recording of this presentation is available from WCW’s Facebook page.

Scholar and activist on issues of equity, education, and privilege, Peggy McIntosh, Ph.D. gave a talk at the Clearinghouse for Women’s Issues, chaired by Susan Klein, of the Fund for the Feminist Majority in Washington, DC in May. Also that month in DC, she presented at a conference on Pedagogy for Multicultural Teaching at the National Conference on Race & Ethnicity. In September, McIntosh consulted with the National Security Agency (NSA) at its headquarters in Fort Meade, MD, leading workshops for staff with various levels of responsibility in the agency; she also visited the National Cryptological Museum under the guidance of an NSA expert. Also in September, she presented to a Wellesley College Introduction to Women’s and Gender Studies class. In October, McIntosh presented to and met with many students, faculty, and administrators at DePauw University in Greencastle, IN, at the invitation of Tamara Beauboeuf, Ph.D., former WCW visiting scholar. In November, she spoke Cary Academy in Raleigh, NC, and presented at the Conference for the National Center for Race Amity in Boston, MA. 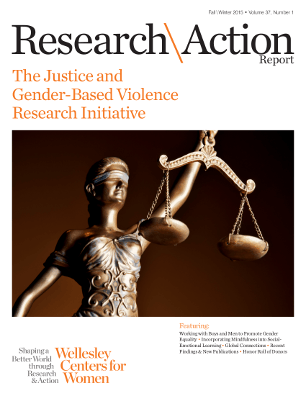