Georgia Hall, Ph.D., senior research scientist at the National Institute on Out-of-School Time, presented “Summer Slide: Not Your Average Playground” during the fourth annual Youth-Nex Conference After-School Programs for Children & Adolescents in October 2014 at the University of Virginia, Charlottesville, VA. Hall and other panelists focused on best practices from the views of evaluators, practitioners, and youth and identified ways administrators and youth workers can make their programs more effective, sharing best practices based on research and evaluation in the field.

The 2014 Jean Baker Miller Memorial Lecture, “The Great Silence around Men’s Voices,” by Allan G. Johnson, Ph.D. was held October 24, 2014 at Wellesley College, Wellesley, MA. A nationally recognized nonfiction author, novelist, and public speaker who focuses on issues of social inequality, Johnson has authored research on sexual violence, testified before legislative committees, consulted with the National Center for the Prevention of Rape and the Connecticut Commissioner of Public Health, and served on the board of the Connecticut Coalition against Domestic Violence.

How Connections Heal: Founding Concepts and Practical Applications of Relational Cultural Theory (RCT), the Jean Baker Miller Training Institute’s (JBMTI) annual introductory institute, was held October 24-26, 2014, on the Wellesley College campus. The Introductory Institute is a unique opportunity for the intensive study of RCT and its direct applications in the world. In addition to interactive presentations and workshops led by Institute faculty, learning activities included small and large group case discussions, community building, role play, and multi-media presentations. The advanced institute is currently being planned for the third week in June 2015.

The Spring 2015 Webinar Series—Four Ways to Click: Rewire Your Brain for Stronger, More Rewarding Relationships, will also be led by Banks, author of the forthcoming book of the same title (Penguin Random House, February 2015). All webinars will be held on Fridays, from 11:00 a.m.-12:30 p.m. Eastern Standard Time. Programs include: “We Live Within One Another: The Mutual Impact of Brain and Relationship” on March 13, 2015; “Understanding How Relationships and Culture Shape Your Four Neural Pathways for Connection” on April 10, 2015; “Four Ways to Click: Strengthening Your Four Pathways for Connection” on May 1, 2015; and “Four Ways to Click: Building More Rewarding Relationships” on May 29, 2015. For more book and program descriptions, continuing education credit details, and registration information, visit www.fourwaystoclick.com.

Linda Charmaraman, Ph.D., WCW research scientist at the Wellesley Centers for Women (WCW), presented the Opening Address at the June 2014 Youth Sexuality Media Forum in Detroit Michigan, funded by the Ford Foundation, and participated in the event’s follow-up virtual Blogger’s Day. During this online event, leaders in media, research, community-organizing, and service provision explored the complicated ways that social inequality affects the experiences of young people, and began to develop strategies to address these issues. Charmaraman’s blog about stereotypes and stigma in the media is posted online at: www.detroityouthpassages.org/category/blog/.

Invited by the Robert Wood Johnson Foundation (RWJF), Charmaraman wrote a July 2014 article, “Facebook: Friend or Foe?” for their Human Capital blog. In response to the online release of the RWJF / National Public Radio / Harvard School of Public Health sponsored Stress in America discussion, she explored both the potential burdens and benefits of connecting to one’s online community during periods of stress. Her Human Capital blog, available from the RWJF site: www.rwjf.org/en/blogs, includes links to a Media & Identity Study Fact Sheet, which summarizes her research team’s latest findings on social media and mental health (also available on the WCW site: www.wcwonline.org/mediaidentitystudy).

The National SEED Project on Inclusive Curriculum (Seeking Educational Equity and Diversity) held its 28th summer of New Leaders’ Weeks (NLW) in July and August 2014. During the two weeks, faculty and staff worked with 87 new SEED Leaders who returned to their schools and communities in the U.S., United Kingdom, Uganda, and India, prepared to lead year-long, monthly SEED Seminars during which participants begin to turn oppression and privilege into agency and action, with the goal of creating gender-fair, multiculturally equitable, socioeconomically aware, and globally informed education. Participants in NLW practice facilitating ongoing, structured, group conversations in which all voices can be heard, examining how their own stories relate to social systems, and learning from the lessons of their own lives as well as from texts. Next summer’s NLW will be July 9–16, 2015 and July 23-30, 2015 in San Anselmo, CA. Learn more at www.nationalseedproject.org.

This past summer, SEED fulfilled its commitments under its multi-year W.K. Kellogg
Foundation grant, originally awarded in 2011:
• The number of participants in NLW grew from <40 participants to 87 in 2014.
• SEED trained 39 new facilitators to lead SEED Seminars in 21 under-resourced rural and urban schools and two community groups of local educators.
• SEED developed an interactive website www.nationalseedproject.org and created opportunities for engagement via Facebook (www.facebook.com/NationalSeedProject) and Twitter (@natlseedproject).

Peggy McIntosh, Ph.D., WCW associate director and founder of SEED, spent two days meeting with faculty and students of Tarrant 16 County College in Fort Worth, TX in May and returned to the state in September to meet with the Honors Program at the University of Texas at Tyler. Also in May, McIntosh co-presented with David Christiansen, Victor Lee Lewis, and Hugh Vasquez on the panel, “The Color of Fear 20 Years Later; Lessons Learned,” during the National Conference on Race and Ethnicity in Indianapolis, IN. McIntosh’s three co-presenters were prominent in the 1993 documentary film, The Color of Fear. In June, McIntosh gave a keynote address at the annual meeting of the American Society for Engineering Education, “A Bell Labs Daughter Speaks about Engineering Education.” In July, she conferred with interns from the Boston-based organization, Community Change, Inc., about their insights into social justice work. In August, Gail Cruise-Roberson, B.A., associate director of the National SEED Project, and McIntosh consulted on developing an inclusive community at the Waldorf School in Lexington, MA, utilizing several exercises that come from SEED’s New Leaders’ Week.

Nan Stein, Ed.D. WCW senior research scientist, presented “What’s the Law Got to Do with It? Teaching and Talking about Sexual Harassment, Dating Violence and Sexual Violence in K-12 Schools” during Grand Rounds at Yale New Haven Children’s Hospital-Bridgeport Hospital in Bridgeport, CT in August 2014. That same month, she presented “The Shift from Teen Dating Violence Prevention to Healthy Marriage and Relationship Education: How Federal Policy on Marriage Promotion and Gender-Blind Research Obscures Violence against Girls and Young Women” during the National Sexual Assault Conference in Pittsburgh, PA. In November, she participated in a webinar sponsored by Michigan State University (MSU) that focused on teaching children and youth about sexual harassment, gender violence and bullying— including differences between bullying and bias-based harassment and why it’s important to understand the difference—and adults’ roles in the lives of youth around these issues. A recording of the webinar will be made available through the MSU online bookstore (www.shop.msu.edu) for download at a nominal fee.

Judith Jordan, Ph.D., JBMTI director, participated in an international meeting at Harvard University in September co-sponsored by the Center for Social Policy at UMass-Boston, the Department of Sociology at Harvard University, and the Ash Center for Democratic Governance at Harvard University. The group of international scholars and social policy creators explored the question: “Learning from leadership experiences: What does it mean to build governance for peace?” In October 2014, Jordan offered the lecture, “The Power of Connection” at the College of St. Scholastica in Duluth, MN. While there, she also conducted a day-long workshop on “Mutual Empathy: How we heal and grow.” In March 2015, she will teach a full-day course at the University of Pennsylvania Social Policy Doctoral Program in Philadelphia, PA.

Among her numerous presentations, Layli Maparyan, Ph.D., executive director of WCW, was an invited facilitator for the academics breakout session during the April 2014 White House Research Conference on Girls, organized by The White House Council on Women and Girls, Washington, D.C. She presented “Feminism, Womanism, and Sisterhood that Sustains: An intergenerational dialogue,” as plenary speaker during the Southern Connecticut State University 21st Women’s Studies Annual Conference, Ecology, Spirituality, Sustainability: Feminist & Indigenous Interventions in New Haven, CT, also in April. In October, she presented, “The Luminous Architecture of Change: Spiritual Activism, Personal Spiritual Journeys, and Spiritualizing Social Movement,” the keynote address at the 33rd annual Women and Spirituality Conference at Minnesota State University, Mankato, in Mankato, MN. In November she presented “Women and Spiritual Activism: Building Bridges from Culture to Humanity” at the National Race Amity Conference in Norwood, MA, hosted by the National Center for Race Amity at Wheelock College.

Amy Hoffman, M.F.A., editor-in-chief of Women’s Review of Books, spoke about creative nonfiction during a special program organized by the English Department at Hartford University, Hartford, CT in November 2014. She also read from her memoir, Lies about My Family (University of Massachusetts Press, 2013).

Dana Rudolph, M.Phil., online content manager for the National SEED Project, spoke in July 2014 on a panel about “Mom Blogging—the Next Ten Years” during the Tenth Anniversary BlogHer Conference, the largest gathering of social media influencers in the U.S. Rudolph has been writing her blog, Mombian, since 2005, covering parenting, politics, and diversions for lesbian moms and other LGBT parents. 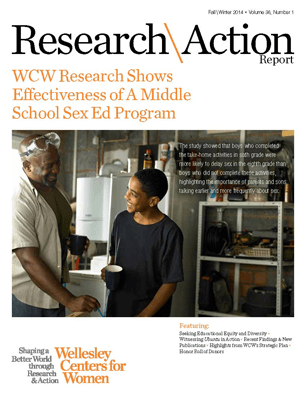