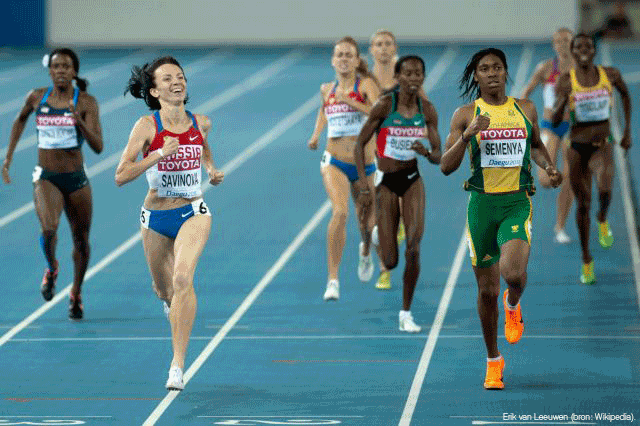 We don’t live in an “either/or” world. Most non-sport institutions get this. It’s why Starbucks has unisex bathrooms, why there are forms to change your gender on government documents, why there is even a concept of “preferred pronouns.”

But athletics remains stubbornly committed to a male-female dichotomy. Enforcement of that rigid divide is again causing a stir. Last month, the International Association of Athletics Federations (the I.A.A.F.) issued new rules for track athletes that will take effect in November requiring some female athletes – those with naturally elevated testosterone – to take medication to suppress those hormones.

The requirement applies to females the IAAF describes as “athletes with differences in sexual development” (they call it “DSD”) and only to middle-distance running events between 400 meters and the mile. Athletes would have to take the medication for six months prior to the Olympic and international events the rules govern.

The IAAF said the rules hope to ensure “fair and meaningful competition within the female classification.” Higher levels of testosterone provide an advantage in speed, power, and endurance, said the IAAF, giving an unfair advantage to these hyperandrogenic athletes.

Yet it’s one thing to decide to transition and another to be forced to change. Perhaps the problem is the guardianship of “the female classification”? It’s true that a 2017 study in the British Journal of Sports Medicine (commissioned by the IAAF), found that athletes with “elevated testosterone levels gained a competitive advantage from 1.78 percent to 4.53 percent,” in the hammer throw, the pole vault, the 400 meter, the 400 meter hurdles and the 800 meter.

The new rule, however, applies to running events, not the hammer throw or pole vault.

The rule also has a personal – even cultural or racial – sheen. That’s because there is no way to consider this rule without looking at the consequences for South African middle-distance runner and two-time 800-meter Olympic champion Caster Semenya, criticized for her muscular physique and deep voice. Since she burst onto the scene in 2009 as an 18-year-old who broke a South African record at the African Junior National Championships, and then won the world title in Berlin, there have been questions about the “unfairness” of her natural physical gifts. (In Berlin, she was reportedly subjected to sex testing).

Semenya has also undergone public sex-questioning, including news reports citing unnamed sources describing her sex organs. “God made me the way I am and I accept myself. I am who I am and I am proud of myself,” she tweeted on May 1.

Indian sprinter Dutee Chand also has suffered public questions and humiliation. In 2014 at the Glasgow Games, she was pulled aside and not allowed to compete. Offered medical “treatment,” she refused. She appealed to the Court of Arbitration, which in 2015 ruled that Chand could compete. The court suspended the IAAF’s hyperandrogenism rules, citing “insufficient evidence about the degree of the advantage” the condition provided.

This is presumably why the IAAF rules now dig into ranges of performance advantage in terms of muscle strength and hemoglobin associated with elevated testosterone levels. While Chand is not affected by the new rules as a sprinter, Semenya certainly is. Two weeks ago, South African law professor Steve Cornelius resigned from the IAAF’s tribunal, stating that he could not associate with “an organization that insists on ostracizing certain individuals, all of them female, for no reason other than being what they were born to be.”

His point: Who defines “female”? How “female” must one be to be “female”? Men in the sport world do not face scrutiny of their physical gifts or surveillance of their hormone levels. At what point is this about biological conformity and social norms? At what point is enforcing a dichotomy – male/female – a failed approach?

Last month, a study in Journal of Sports Sciences analyzed Semenya’s actual times, finding they “were 1.24 percent and 1.49 percent faster than the predicted performance in 800m finals.” That relatively small percentage confuses the male-female divisions even more.

Wrote the authors: “The present study indicates that the percentage difference in performance between women with and women without hyperandrogenism does not reach the 3 percent difference requested by the Court of Arbitration for Sport for the reinstatement of the Hyperandrogenism Regulations, neither does it reach the 10 percent accepted range of difference in performance between men and women.”

Is hyperandrogenism an advantage? Yes. Is it more of an advantage than other naturally-occurring physical gifts athletes enjoy? Unclear. Is it “fair” that Michael Phelps has size 14 feet, double-jointed ankles, and a prodigious wingspan? That Usain Bolt is 6’5”?

If testosterone is the game-changer, then eschew “male” and “female” and re-classify athletes based on testosterone levels – like weight classes in wrestling. Or create some other structure. Otherwise what we are doing here – without naming it – is demanding biological conformity to a Western view of what it means to be a woman.

Laura Pappano is writer-in-residence at the Wellesley Centers for Women and was a leader of the Women’s Sports Leadership Project. She is an award-winning journalist, co-author of Playing with the Boys (2008), and for seven years, she edited the FairGameNews blog, now an archive.

No comments made yet. Be the first to submit a comment
Separating Parents from Children: A Policy of Abus...
Wellesley Centers for Women Mourns the Loss of Adv...