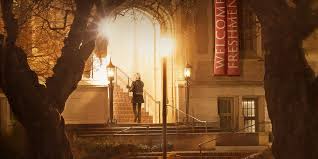 This week we recognize the International Day for the Elimination of Violence against Women. Indeed, gender-based violence impacts women across the globe. Rape in conflict zones or of refugees or of child brides are all horrific and this day makes it clear that violence against women is still a pressing problem—and this includes sexual violence on college campuses.

Today we applaud the courageous women who created, produced, and spoke out in the film “The Hunting Ground.” This movie makes it clear that although sexual assault on campus occurs in the ivied halls of elite U.S. institutions (as well as in the big 10, in religiously affiliated, secular or community colleges) it is not simply one of those #firstworld problems which we must apologize for worrying about in the face of all the tragedies in the world.

“The Hunting Ground” demonstrates the extent to which sexual assault on campus represents not only the evil one person commits against another but also places the harms of campus rape within the context of the institutions. When an institution does not take steps to end sexual violence then they can be seen as providing institutional support for rape and rape culture. While, of course, not all schools fail in this way, many do and the work of the organizers of www.endrapeoncampus.org has brought this to the attention of us all.

The sexual assault of college students—of women and some men—is a denial of access to education. If permitted to continue it relegates women to a marginal status and basically is a way of telling women to “go home.” It gives this message to some women: “If you can't take what is being handed out then you can give your seat at this university to someone who can—to a male” (the male you took it from when women decided they should be able to seek an education so they could become lawyers, doctors, engineers, teachers, writers, political scientists--- be women who will make a difference in the world.) Carol Tracy (executive 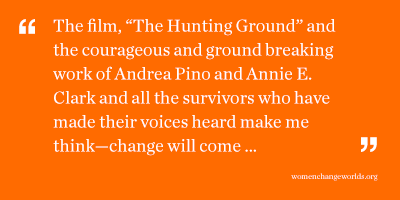 director of the Women’s Law Project, who was honored by the American Society of Criminology just last week for her fight for justice) called the women of “The Hunting Ground” courageous and amazing. Last week Carol helped me to recognize and, yes, maybe even believe, that this film and more importantly the work of these women is the ground zero for a cataclysmic change in how we respond to rape and a path to changing social norms about rape. Certainly this is a turning point in the lengthy battle to stop sexual violence and to end rape. As such, the impact will hopefully go far beyond campuses and the U.S. It is a strong message to victims and survivors throughout the country and throughout the world that they are not alone.

Since Carol and I started working in this field in the early 1970s there has been much change. Many steps forward. In the 1970s there was almost no recognition of the seriousness of the problem of rape for women and men of our land (well except for the brutal legacy of the way black men suspected of rape of white women were treated—an important part of our history we need to return to on another day because I suspect it plays a role in the conflict around men women and rape in the U.S. today.) In the early 1970s Carol was involved in a sit-in against rape that occurred at a fraternity and I was involved in research that led to the discovery that rape was much more likely to take place at the hands of someone known to the victim than to involve a stranger.

Since the 1970s we demonstrated the importance of evidence and rape kits (and then some folks “forgot” to test them) and rape crisis centers were started and researchers began to pay attention to this crime and to victimization. Laws were changed and victims were supported in the process… But in many ways it had begun to feel like we had hit a wall on the progress needed to end rape, to find justice for the survivors and to eliminate violence against women. The film, “The Hunting Ground” and the courageous and ground breaking work of Andrea Pino and Annie E. Clark and all the survivors who have made their voices heard make me think—change will come ... A new wave is breaking. “The Hunting Ground” is ground zero for changing norms around sexual assault and eliminating this form of violence against women.

Linda Williams, Ph.D. is co-director of the Justice and Gender-Based Violence Research Initiative at the Wellesley Centers for Women at Wellesley College.

No comments made yet. Be the first to submit a comment
Science and the Law Working Together to Improve th...
36 Years since the March on Washington for Lesbian...