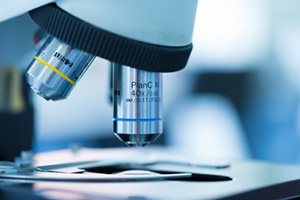 Few would argue that the value of forensic science in solving crimes has been a game changer in favor of the investigation and prosecution of criminal offenders. Indeed, forensic evidence can be credited with bringing many criminals to justice (and exonerating the innocent). In cases of sexual assault, there was hope that advances in evidence gathering would lead to more prosecutions. Fueling this possibility was a focused effort over the last few decades to train medical personnel to collect forensic evidence, known in the criminal justice vernacular as rape or sexual assault kits, in the aftermath of an assault. While intended to be thorough in the interest of evidence gathering, the exam is an intrusive and difficult experience for victims. So it was perhaps one of the most important and disappointing developments when it was discovered that thousands of untested rape kits going back many years were sitting in crime labs or property rooms of police departments across the U.S.

The outrage expressed at this revelation by advocates, practitioners, and policymakers was channeled into action through significant funding allocated by the Department of Justice to conduct research that would serve to develop priorities for testing unsubmitted sexual assault kits. The importance of these efforts was fortified in the Violence Against Women Reauthorization Act of 2013. This legislation calls for the development of policies, protocols, and training for law enforcement officers and prosecutors regarding the investigation and prosecution of sexual assault cases and the appropriate treatment of victims. It also calls for the identification and inventory of backlogs of sexual assault kits and to develop protocols for 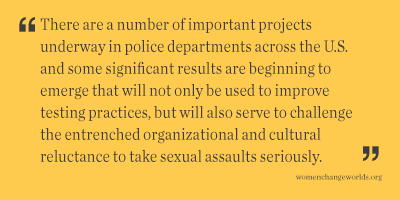 responding to and addressing such backlogs, including policies and protocols for notifying and involving victims. States and local jurisdictions have also been responding by implementing backlog reduction legislation or initiatives.

Funds made available through this legislation are being used to analyze backlogged DNA crime scene samples, including sexual assault kits, and offender DNA samples for inclusion in CODIS—a national database containing DNA profiles of persons involved in crimes—and notifying victims of new developments in their cases. There are a number of important projects underway in police departments across the U.S. and some significant results are beginning to emerge that will not only be used to improve testing practices, but will also serve to challenge the entrenched organizational and cultural reluctance to take sexual assaults seriously. While borne out of an unfortunate discovery, the commitment by local, state and federal agencies to understand and address the issue of untested kits provides hope for advancing action and theory in the age old challenge to reduce sexual assault case attrition.

April Pattavina, Ph.D. is co-director of the Justice and Gender-Based Violence Research Initiative at the Wellesley Centers for Women at Wellesley College.

No comments made yet. Be the first to submit a comment
A World AIDS Day Hero: Beatrice Achieng Nas
"The Hunting Ground”—Ground zero for changing soci...