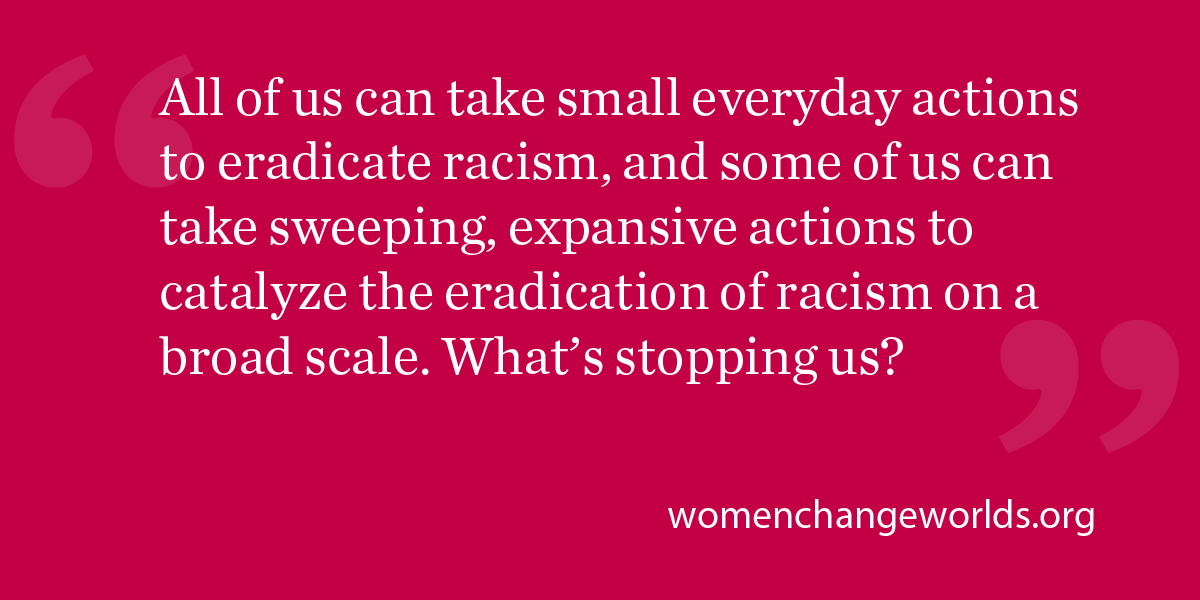 Why has it been so hard to eliminate racism in the United States, despite concerted and valiant efforts, ever-growing numbers of people of goodwill, lots of good thinking about the issue, and some clear-cut progress and gains over the years? As a researcher and director of the Wellesley Centers for Women, a research institute with a demonstrated commitment to gender equality, social justice, and human wellbeing in all its forms, including ending racism, my mind turns more to questions than answers today, in the wake of what happened in Charlottesville this past Saturday, August 12.

Questions I am asking include things like: What are we doing that we think is working but which actually isn’t working? What do we need to do that we aren’t doing that would actually work? Which of the things we are actually doing do work and just need more time or more people involved? And, in what ways do we need to more deeply operationalize things we know to be true but tend to abandon to the realm of platitudes? How can we more effectively move from intellectual knowledge to concrete action to measurable social transformation?

Last week, I spent a week in retreat with members of my religious community, the Baha’í Faith. For two of those days, I led discussions addressing the elimination of racism, which Baha’ís refer to as “The Most Challenging Issue.” We gave thought to the inner (self-focused) and outer (public) actions and practices needed to truly eliminate racism, and we asked some hard questions about our own practices and the practices of others in the social change field. We reflected deeply on passages such as these, penned 1938 by Shoghi Effendi, who was charged with guarding the unity of our Faith as it grew from local to global:

“Freedom from racial prejudice, in any of its forms, should, at such a time as this when an increasingly large section of the human race is falling a victim to its devastating ferocity, be adopted as the watchword of the entire body of the American believers, in whichever state they reside, in whatever circles they move, whatever their age, traditions, tastes, and habits. It should be consistently demonstrated in every phase of their activity and life, whether in the Bahá’í community or outside it, in public or in private, formally as well as informally, individually as well as in their official capacity as organized groups, committees and Assemblies. It should be deliberately cultivated through the various and everyday opportunities, no matter how insignificant, that present themselves, whether in their homes, their business offices, their schools and colleges, their social parties and recreation grounds, their Bahá’í meetings, conferences, conventions, summer schools and Assemblies.”

“A tremendous effort is required by both races if their outlook, their manners, and conduct are to reflect, in this darkened age, the spirit and teachings of the Faith of Bahá’u’lláh. Casting away once and for all the fallacious doctrine of racial superiority, with all its attendant evils, confusion, and miseries, and welcoming and encouraging the intermixture of races, and tearing down the barriers that now divide them, they should each endeavor, day and night, to fulfill their particular responsibilities in the common task which so urgently faces them. Let them, while each is attempting to contribute its share to the solution of this perplexing problem, call to mind the warnings of ‘Abdu’l-Bahá, and visualize, while there is yet time, the dire consequences that must follow if this challenging and unhappy situation that faces the entire American nation is not definitely remedied.”

Our takeaways from these days of contemplation and discourse left us poignantly aware that inner and outer work must constantly run parallel, allowing us to transform into beings who actually desire and actively create justice, peace, and harmony, from the level of our deepest gut feelings to the level of our highest spiritual aspirations. To think all the “right” thoughts and hold all the “right” values is not enough, because the transformation of society requires so much more. 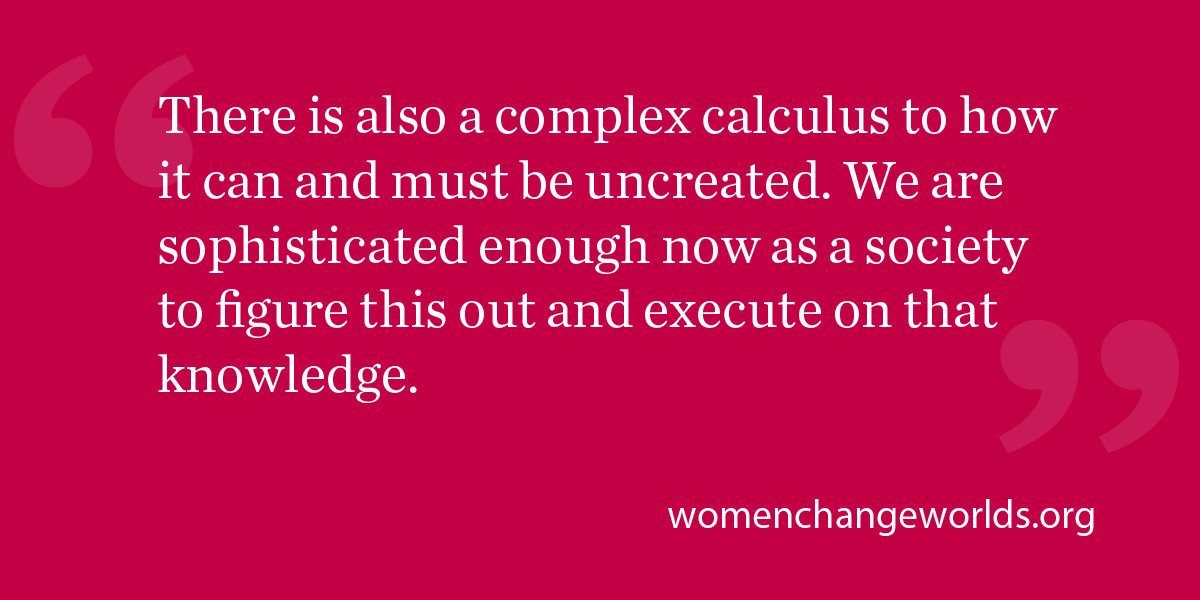 As a developmental psychologist who works from an ecological systems theory framework, I know that interventions on racism must take place at every level from the most interior to the most distal, in order to be successful and sustainable. Yet, as a lifelong scholar of both African American studies and women’s studies, I also know that we must perpetually refresh our understanding about what kinds of social movement methods work, and we must stay tuned in to when and where they need refinement. Sometimes, our assumptions about what kinds of methods work and why they work (or don’t work) need to be questioned.

As a developmental psychologist, I also can confirm that babies don’t enter the world knowing hate. Hate is learned by imitation, but it is also absorbed passively through language and imagery, and stimulated by deprivation, hardship, ridicule, and trauma. While unchecked power and privilege, often conferred by birth circumstances, also have the power to accelerate hate, these alone are not sufficient to create it. There is a complex calculus to how hate is created – which means there is also a complex calculus to how it can and must be uncreated. We are sophisticated enough now as a society to figure this out and execute on that knowledge.

A big part of my talk at the Baha’í retreat centered on the politics of invitation, the notion of inviting others to a better world, as differentiated from the politics of opposition, which rely on fighting and struggling our way to a better world. If unity is the goal, opposition cannot logically be the means to that end. And we now know that, psychologically, opposition to people and their views only entrenches them further in their views. So, what other methods might we consider if we want to eradicate racism and promote justice, peace, commonweal, and amity?

All of us can take small everyday actions to eradicate racism, and some of us can take sweeping, expansive actions to catalyze the eradication of racism on a broad scale. What’s stopping us? Please share your questions and thoughts about how we can genuinely eliminate racism from our country and the world!

Layli Maparyan, Ph.D., is the Katherine Stone Kaufmann '67 Executive Director of the Wellesley Centers for Women and Professor of Africana Studies at Wellesley College.

My guess is that fear of doing "hard work" (having the hard conversations and self-examination) is what is stopping us as a nation. Fear of being ostracized from comfortable social groups or your family of origin. Fear of being seen as a trouble maker. Fear is a killer.

0 Cancel Reply
My guess is that fear of doing "hard work" (having the hard conversations and self-examination) is what is stopping us as a nation. Fear of being ostracized from comfortable social groups or your family of origin. Fear of being seen as a trouble maker. Fear is a killer.
Cancel Update Comment

What would be some good sources for learning more about the politics of invitation as mentioned here? I want us to engage more in our community on coming up with positive actions and it would be useful to learn more about how to keep the focus positive.

0 Cancel Reply
What would be some good sources for learning more about the politics of invitation as mentioned here? I want us to engage more in our community on coming up with positive actions and it would be useful to learn more about how to keep the focus positive.
Cancel Update Comment

Jean, the basic ideas undergirding the politics of invitation are laid out in my second book, The Womanist Idea, and I have been refining them since then, primarily in lectures and presentations. I'll circle back with more information once I have more details about the published article! I'm glad to know that the concept resonates!

0 Cancel Reply
Jean, the basic ideas undergirding the politics of invitation are laid out in my second book, The Womanist Idea, and I have been refining them since then, primarily in lectures and presentations. I'll circle back with more information once I have more details about the published article! I'm glad to know that the concept resonates!
Cancel Update Comment
1
New Messages in Boston Race Protests
13 Reasons Why and the Need for Correct Messages A...