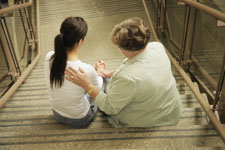 May is National Mental Health Awareness month, a fitting time to be mindful of the suffering caused by mental illness. Even though I am a psychiatrist, working daily with people diagnosed with mental illness, I am stunned by the statistics on the incidence of mental illness. According to the National Institute of Mental Health in any 12 month period, 26.2 percent of adults are diagnosed with a mental illness. That is one in four adults who are experiencing disturbing and often debilitating symptoms--the constant distress of an anxiety disorder, the aching despair of a major depression, the terror of psychosis. The lifetime incidence of mental illness is over 50 percent. These statistics tell us that if you have not been diagnosed with some form of mental illness, someone you know and love has. When you go to work today or even out with friends in the evening, see if you can identify the one in four people who has a mental illness. Don’t be surprised to walk away thinking there are none in your group. Also don’t be surprised to find out that you are wrong. 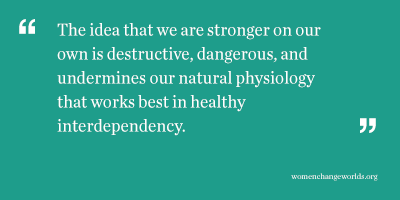 So, where are all the people with mental illness? From what I hear in my office, many are hiding and suffering in silence for fear of being stigmatized, pitied, or seen as weak. American, Westernized culture plays a large role in this fear. The pervasive image of an American is a person who is strong, independent, and can “make it” on his or her own. There is no direct media campaign telling people who have a mental illness to stay in the closet, but the chronic cultural myth of the “self made man” acts as a reference point from which we all measure our worth. The more dependent you are on others, the less value you hold. This cultural bias is insidious and contributes to an environment that makes each of us hide our vulnerabilities behind a wall of shame at not being strong enough to manage our day to day lives on our own.

The idea that we are stronger on our own is destructive, dangerous, and undermines our natural physiology that works best in healthy interdependency. Professor Emeritus at the University of British Columbia, Jilek Wolfgang, M.D., M.Sc. reports that people who develop a psychotic illness actually heal faster in a non-Westernized world. A stunning finding given that Western societies are known to have the most educated doctors and best hospitals in the world. So what accounts for the improvement? A lack of stigma. In the West, psychosis or the loss of reality testing is seen as the ultimate failure of individual strength. It is frightening and dangerous. On the other hand, in many parts of Africa, extended family and community reach out and embrace the individual with psychosis rather than fearing or shunning him.

Relational neuroscience offers some explanation for this finding. Researchers at UCLA, Eisenberger and Leiberman, have discovered that the pain of social exclusion is registered in the exact area of the brain, the dorsal anterior cingulate gyrus, as the pain from a physical illness or injury. Because humans are meant to function best in healthy human connection, this area of the brain fires an alarm for things that are life threatening. The chronic pain of an acute physical injury or illness can be lethal, but Social Pain Overlap Theory (SPOT Theory) tells us that being socially rejected is every bit as dangerous. When we stigmatize and ostracize people with mental illness we increase their stress levels, decrease their ability to fight illness, and prolong their healing process.

The range of functioning in the people I treat everyday is tremendous--from CEOs capable of running a company while having a mental illness to individuals on disability unable to work because of severe symptoms. Almost every person I see is hiding their diagnosis from at least one important person in their lives out of fear of the anticipated rejection. In this month of May let’s all open our eyes and our hearts to see and embrace someone with a mental illness and to support those who are suffering knowing full well that statistics show having a mental illness is not an individual failure nor a weakness. Mental illness is, well, an illness and the best hope for a speedy recovery is the support of extended families and friends. This cultural shift from pathological independence to healthy interdependence holds the power to heal many wounds and to improve the lives of all of us who will experience the pain of mental illness.

Amy Banks, M.D. is the director of Advanced Training at the Jean Baker Miller Training Institute at the Wellesley Centers for Women, Wellesley College. Over the last ten years at the JBMTI, she has been integrating emerging neuroscience information with relational-cultural theory.

Your comment about the hidden lives and experiences of people with disabilities is borne out by ample research, as I learned when researching myths and biases about PWD's for my online course, DiversityEdu. I think Professors Richard M. Keller and Corinne E. Galway of Columbia University Teacher's College put it succinctly when they wrote (citing findings by the American Psychological Association), "The needs, experiences, hopes, and aspirations of PWD's are relatively unknown, unrecognized, and underestimated."
( Microaggressive Experiences of People with Disabilities, chapter 11 in Microaggressions and Marginality, Dr. Derald Wing Sue, ed.)

0 Cancel Reply
Your comment about the hidden lives and experiences of people with disabilities is borne out by ample research, as I learned when researching myths and biases about PWD's for my online course, DiversityEdu. I think Professors Richard M. Keller and Corinne E. Galway of Columbia University Teacher's College put it succinctly when they wrote (citing findings by the American Psychological Association), "The needs, experiences, hopes, and aspirations of PWD's are relatively unknown, unrecognized, and underestimated." ( Microaggressive Experiences of People with Disabilities, chapter 11 in Microaggressions and Marginality, Dr. Derald Wing Sue, ed.)
Cancel Update Comment
1
Women, Employment & Health
The Time Is Now for Women and Girls