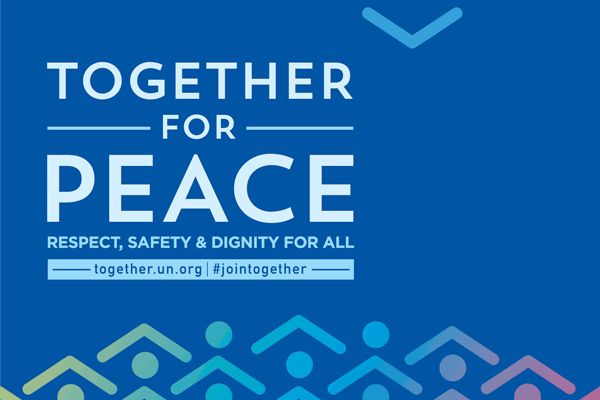 Since 1981, the United Nations has observed International Day of Peace on September 21. In its resolution, the UN marked the day as a “globally shared date for all humanity to commit to Peace above all differences and to contribute to building a Culture of Peace.” But how far along are we in this process? Terrorism, nuclear weapons, militarization, and other visible forms of violence are in plain sight. And if one considers the hidden and silenced forms of violence, it is difficult to be optimistic.

As a global and long term trend, some popular and academic publications would have us believe that violence in the world (from wars to homicide) is declining. Steven Pinker’s The Better Angels of Our Nature, the 2013 Human Security Report, or Joshua Goldstein’s Winning the War on War argue that the data at our disposal shows that, not only has the number of interstate and intrastate wars decreased, battle-related casualties have also been in a downward trend since the end of the Cold War. Pinker goes as far as saying that recorded violent deaths have been on the decline at least since 10,000 BCE.

As feminists, however, we know better than to trust just numbers as if they were the only data at our disposal. Feminist scholarship and advocacy shows that those numbers and statistics are misleading, particularly as they ignore and make invisible violence against women and girls (VAWG). Monash University Professor Jacqui True claims that if qualitative and quantitative data on VAWG are taken seriously, we are not witnessing a decline in violence, quite the opposite. Feminists have exposed the extent and gravity of political violence committed in the home (so commonly characterized as non-political, because ‘domestic’); the underreporting and ignoring of sexualized and gender-based violence; and the multiple forms of harm – psychological, physical or economic – suffered by women and girls as a consequence of unequal gendered power structures during armed conflicts as well as in so-called peace times.

Feminist insights compel us to make violence and threats of VAWG central to our definition of peace. If VAWG is increasing, we cannot really say that we, as a human species, are getting better at peace. The challenge is then to recognize and make visible VAWG, its causes and consequences, as a precondition to, but also as inextricably linked to achieving a more peaceful and just world. In the view of the world’s longest-operating international women’s peace organization – Women’s International League for Peace and Freedom (WILPF), feminist peace is expansive and inclusive. It is about recognizing all forms of oppression and violence as interrelated; about questioning how systems of power and privilege – from neoliberal capitalism and patriarchy, to militarism and racism – underlie and sustain a violent world; about providing feminist visions and models for a different, more just and peaceful future. 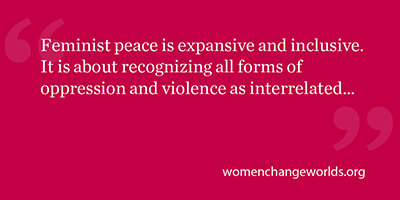 WILPF has been one of many women’s peace organizations who successfully lobbied the UN Security Council to recognize, in Resolution 1325 (UNSCR 1325), that peace and security are linked to gender equality. Specifically, UNSCR 1325 – and several follow-up resolutions in subsequent years – created obligations for UN member states and other parties in armed conflicts – i.e., non-state actors, militias, humanitarian agencies, etc. – to adopt a “gender perspective” in the prevention of war, in peace processes, and in relief and recovery efforts. Often criticized for, among other things, adopting a narrow view of gender, UNSCR 1325 nevertheless recognizes the particular ways in which women are victimized during war, as well as the ways in which they participate in armed conflicts and in subsequent peace efforts.

A 2015 report on the implementation of the resolution – authored in consultation with women’s groups across the world by Radhika Coomaraswamy – shows, however, the chasm between feminist peace activists’ goals and the political and financial support their agenda receives from international and state policymakers. For example, despite growing evidence that women’s participation in peace negotiations contributes to the durability of peace agreements, there continues to be a reluctance to include women in conflict resolution and peace-building processes. Despite strong links between women’s rights (such as the right to education, health, political participation and leadership, or property) and their security and bodily integrity, gender equality is yet to become a central organizing principle of post-conflict humanitarian assistance, development, or human rights work.

Coomaraswamy’s report offers unmistakable evidence of the connections between justice, peace, and gender equality. Commitment to “Peace above all differences” and to “building a Culture of Peace” commands us, then, to take seriously both the work of feminist peace advocates and feminism as a lens with which to approach questions of peace, justice, and security. Only then can we begin to establish the conditions and institutions that nurture and support non-violent and just human relations, and recognize the inherent worthiness and dignity of every human being.

Scholar and activist around issues of peace and gender, Catia Confortini, Ph.D., is an associate professor of Peace and Justice Studies at Wellesley College and a member of the Wellesley Centers for Women Council of Advisors.