A Case of Structural Racism 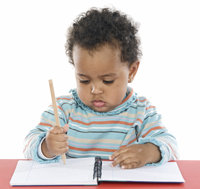 For five years, from 2008 until 2013, I studied how Mississippi implements its child care certificates for low-income women who received the certificates as a welfare benefit. I brought to the work a racial lens and decades of studying the political right as a movement. I found a profound impact of both race and right-wing politics in my study of the Mississippi welfare bureaucracy and how low-income women and their children are treated. It has been a challenging and enlightening five years of travel, reading, conducting interviews, and mining historical and contemporary narratives.

Although Mississippi is majority white (60.6 % vs. 37.2 % Black in 2008), its poor are disproportionately African American (55% of low income households). Its overall poverty rate is 28%. Black people’s median earnings in Mississippi are about $10,000 less than whites. Approximately 13.9 % of children live below half of the poverty level, the highest percentage in the country. According to KidsCount, a project of the Annie E. Casey Foundation, Mississippi’s overall rank in child well-being is 50th out of 50 states.

Because many white people in Mississippi think of welfare as a “Black” program, its image is doubly stigmatized--by the negative stereotype of welfare recipients and by the widespread belief that recipients are African American. No Mississippi governor in recent memory has made the state’s low income people a priority. As a result, recipients of welfare services are viewed with suspicion and hostility.

Usually, some 6,000 children are on the waiting list to receive a child care certificate. This is no longer a matter of explicitly racial policies, but is a product of de facto racism in the implementation of Mississippi’s subsidized child care. By creating daunting barriers for low-income mothers in accessing subsidies for child care, Mississippi is disproportionately leaving their children behind. 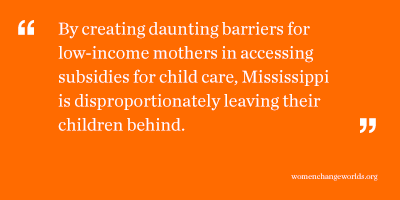 In Mississippi, advocacy for low-income women and children tends to occur only in the non-profit and non-governmental sectors, which are both relatively under-resourced in comparison with other states. No adequately powerful counter-voice exists to offset the public tone of hostility toward low-income women. Further, conscious and sub-conscious racism is so entrenched in Mississippi that even policies that would appear to address racial discrimination turn out to have no impact. Mississippi could be said to be “Ground Zero” for structural racism. So intractable is this form of racism at all class levels that the elimination of Jim Crow laws and practices has failed to eliminate structural racism. Neglect of poor children of color in Mississippi is but one outcome.

A symptom of the Mississippi Department of Human Services’ attitude toward welfare recipients is its latest scheme to fingerprint mothers each time they drop off their children at child care and when they pick them up. Only welfare recipients will have to use the fingerprint scanner. This scheme has cost Mississippi $8 million dollars and is intended to “reduce fraud and thus make more child care certificates available to others.” Child care providers and certificate recipients mobilized in opposition to the program. It has been temporarily stopped by the courts, but only because MDHS has been unable to complete the research the court required of it.

Mississippi is not alone in its pervasive structural racism. In every state in the country, race plays a role in the opportunities available to children and the likelihood of success for families. The perception by whites of the motivations of low-income people has been heavily influenced by a rightist campaign to demonize the poor as “dependent” and failing to take personal responsibility for their lives. This campaign has amounted to a war on the poor. Mississippi is but a shining example of that war.

For those of us who believe that improvement in the lives of Mississippians depends on empowerment of Black and white Mississippians from the ground up, child care is a crucial component. We learn more every year about the development of a child’s brain and what an enormous difference it can make to the future life of a child if that development is nurtured and expanded in the earliest years. Child care is not the only key to breaking through the barriers standing in the way of low-income Mississippians, but high quality early child care is an intervention that holds the possibility of changing outcomes for low-income children.

Jean Hardisty, Ph.D. is a Senior Scholar at the Wellesley Centers for Women at Wellesley College. This blog draws upon the report, Between A Rock and A Hard Place: Race and Child Care in Mississippi. 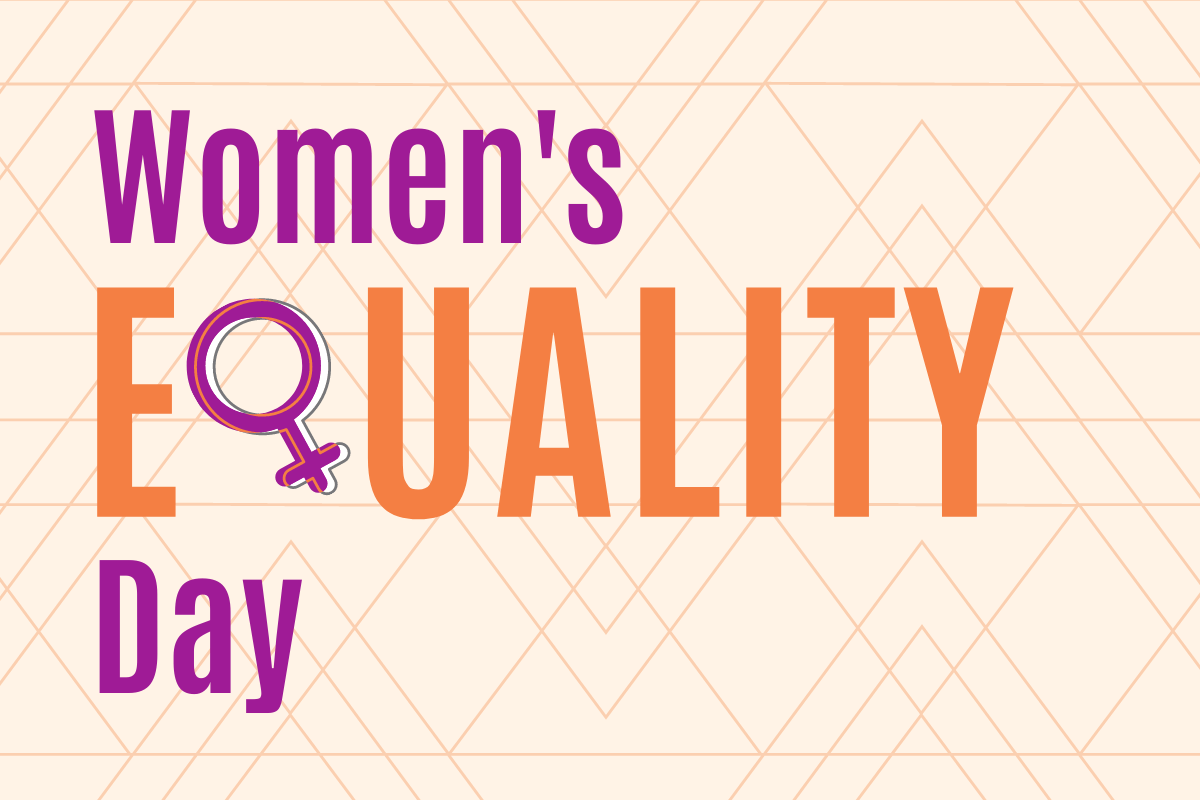 August 26, Women’s Equality Day, always raises mixed feelings for me. I can join in the spirit of celebration over how far women have come from the days when my graduate school professor announced in class that if the political science department ever hired a woman, he would leave. When I was told I could not change my name from my married name to my “maiden” name; when flight attendants were all women who had passed an “attractiveness” test; and domestic workers had no rights to fair pay nor protection from assault and sexual harassment. And, of course, I remain grateful to Rep. Bella Abzug (D-NY), who almost single-handedly pushed the creation of “Women’s Equality Day” through Congress in 1971.

The date was selected to commemorate the 1920 passage of the 19th Amendment to the Constitution, granting women the right to vote (though a meaningful extension of this right for African American women in many states did not occur until the 1964 Voting Rights Act). The passage of the 19th Amendment was the culmination of a massive, peaceful civil rights movement by women that had its formal beginnings in 1848 at the world’s first women’s rights convention, in Seneca Falls, New York. Workplaces, libraries, organizations, and public facilities now participate with Women’s Equality Day programs, displays, video showings, or other activities.

This is all good. So why my lingering sense of discontent when the subject of equal rights for women comes up? It may be based, in part, on personal experience. I lived in Illinois in the 1970s when the very last states were scheduled to vote to ratify the Equality Rights Amendment (ERA). Having passed Congress and been ratified by 35 states, it seemed that the ERA was on the path to becoming part of the Constitution.

But Phyllis Schlafly, doyenne of the right-wing, anti-feminist women’s movement, decided to stop Illinois’ ratification of the ERA, making that goal explicit by starting an organization called STOP ERA. Her followers baked pies for Illinois legislators with the message Stop ERA hidden inside. She traveled tirelessly to argue against the ERA. She raised the specter of “horrible consequences” that would follow from its passage, such as women in military combat and unisex bathrooms. On June 18, 1980, Schlafly succeeded when the Illinois legislature failed by five votes to ratify the ERA. Our current Congress would never pass its equivalent, though it has been reintroduced in every session of Congress since 1982.

Certainly, another source of my discontent is the ongoing plight of low-income women, whose safety net is now shredded, so that life is increasingly unmanageable and the struggle to keep food on the table is harder every year. As the gap in income widens inexorably, these women and their children are, far from equal, being left farther and farther behind. A growing number of women continue to live in fear of violence, wage theft, and abuse by employers, with little access to public services and usually facing a hostile welfare system. Their rights are limited by their lack of earning power and, often, their lack of a good education.

Fighting for women’s equality is an arduous but necessary process, ploddingly pursued by dedicated women and men who refuse to accept a lesser role for women in society.

But women do have a number of avenues to redress unequal treatment. The Violence Against Women Act became law in 1994 (though periodic reauthorizations are still a struggle). Title IX became the basis for the transformation of women’s and girls’ participation in sports in 1972. Women have successfully sued for equal pay for equal work, equal access to promotion, equal right to a military career, and pregnancy rights in the workplace. In international settings, the pursuit of rights for women is increasingly seen as an important key to unlocking the potential for improvements for a country as a whole.

Women’s rights organizations continue to organize, lobby, and litigate in areas that remain intransigent, such as family leave, child care, equal pay, protection from sterilization, domestic violence, and the rights of women in prison. Massive problems, such as human trafficking, persist. Fighting for women’s equality is an arduous but necessary process, ploddingly pursued by dedicated women and men who refuse to accept a lesser role for women in society.

“Women’s rights are human rights”--a current anthem of the women’s movement--remains a vision, a goal, and a noble quest that we pursue at the Wellesley Centers for Women. As we say, “A world that is good for women is good for everyone."

Jean Hardisty, Ph.D., was a senior scholar at the Wellesley Centers for Women at Wellesley College until she passed away in 2015. She was the founder and president emerita of Political Research Associates (PRA), a Boston-based research center that analyzes right-wing, authoritarian, and anti-democratic trends and publishes educational materials for the general public.