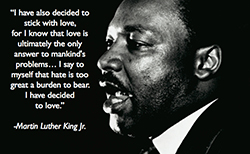 The past year has generated national and international soul searching on the theme of social movement. In the U.S., events as diverse as the multiple police shootings of unarmed Black men, the killings of police officers on patrol, domestic violence incidents involving professional athletes, and misogynistic serial killings of women, have left us wondering who we are as a nation. Around the world, events such as the mass kidnapping of African schoolgirls, the shootings of journalists in Europe, and the rise of religious extremist violence in general, have shocked and outraged us. Many people are wondering what forms of mobilization can be effective in today’s world. We scratch our heads over the fact that, while obvious progress has been made on many social justice fronts, new and worse hate-based acts of violence – indeed, new horrors – seem to crop up every day and everywhere. There is a tendency, quite natural and laudable, to reach back for familiar forms of social movement – such as protest – and to update them (for example, through social media). But is this enough and, more importantly, is it really effective? Is this really all we can do? In honor of the great visionary thinker and agent of social transformation, Dr. Martin Luther King, Jr., whose legacy we celebrate today, I have a few thoughts.

I’d like to begin with a premise, perhaps controversial: We have no enemies. No matter how much we dislike or disagree with someone else’s point of view, we are still brothers and sisters. No matter how gravely someone crosses a line we would not cross or commits an act we see as unconscionable, we are still part of one human family. Admittedly, this is difficult. For starters, it is natural to recoil from things that offend our sensibilities, through whatever process of socialization we came to hold those sensibilities. Stated differently, we have to work to try to understand things that are outside our ken of acceptability. But, I argue, this work is worth it, because it makes possible the beginnings of dialogue – dialogue that can bring us together, ultimately transforming hearts and minds. Without the attempt to understand someone else’s point of view, dialogue never begins. Yet, once dialogue commences, transformative points of commonality can be discovered, leading to social change. Sometimes it is just the simple, everyday act of talking with someone that one might not otherwise talk to that launches the chain reaction of change. 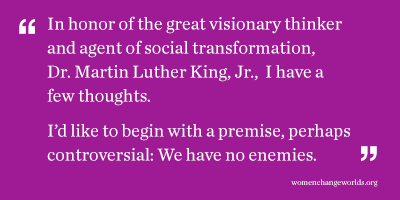 The story of Xernona Clayton and Calvin Craig bears this out beautifully. Xernona Clayton was a civil rights activist who worked for the Southern Christian Leadership Conference alongside Dr. King, and, in 1967, she became the first Black woman in the Southeast to have her own television show, The Xernona Clayton Show. Around this same time, she was appointed by then Mayor of Atlanta, Ivan Allen, as community affairs director for the Model Cities program. There she met Calvin Craig, a heavy equipment operator who happened also to be the Grand Dragon of the Ku Klux Klan and the chair of the Model Cities program in one of the five communities within her jurisdiction. “I don’t know how you’re all going to get along,” the Mayor told Clayton. She said, “I don’t run away from people.” At one of their meetings, Clayton daringly and only half-jokingly told Craig that, “Before this project is over, I’ll not only have you eating at my house, I’ll have you eating out of my hand!”

Over the course of a convivial relationship, they found common cause in their Christianity (both belonged to Baptist denominations) and a shared sense of humor. To everyone’s surprise, in 1968, shortly before Martin Luther King, Jr.’s assassination, Calvin Craig publicly announced that he was leaving the Klan because his views had changed. He credited his change of heart to his friendship with Xernona Clayton. Clayton was poised to introduce Craig to Martin Luther King, Jr., who, after some hesitancy, agreed to meet with the man, but fate would not have it, as King was assassinated just days later in Memphis. The night of King’s death, Craig came to King’s home to pay respects. Afraid or ashamed to approach the door, he stood in the yard until someone gave the message to Mrs. Coretta Scott King that Craig was there. She invited him in, but still Craig refused – perhaps his own way of showing respect for Dr. King.

Craig’s obituary reveals that, over time, he would again both join and denounce the Klan. However, an interview with his daughter, Gail Craig Myers, reveals the extent to which Calvin Craig was transformed by his friendship with Xernona Clayton. To quote Myers, speaking of Xernona Clayton, “[Y]ou healed my father and cleansed our family.” This is a strong statement of transformation – a testament to the power of friendship, and a testimony to the power of non-oppositional approaches to social justice and social change, and to the healing power of racial amity – America’s “other tradition” – as a framework for shifting race relations. It is also a testament to the power of everyday acts that change hearts and minds – a reminder that we cannot rely solely on politics and policy if we truly want enduring peace and justice.

So, on this King Day, I am asking you to consider with me the power of connection, the power of reaching out – beyond our comfort zones – to acknowledge one another’s full humanity and to try, in a new way, to build the world that we’d like to live in. I’m asking us to imagine activism without enemies – to never lose sight of the fact that, no matter how hard things get, we are all in this together. It is certainly an extension of Dr. King’s legacy, enlarging the “Beloved Community” to ultimately include all of us. I dare everyone of us to try it and see where we are this time next year!

No comments made yet. Be the first to submit a comment
"R" is for Resonance
"A" Is for Accepted