On October 11, International Day of the Girl Child, Intern Simone Toney and Senior Research Scientist Linda M. Williams, Ph.D., discuss how USA Gymnastics exemplifies what happens when an institution places a girl’s achievements above all else, and how Simone Biles is driving change for the better. 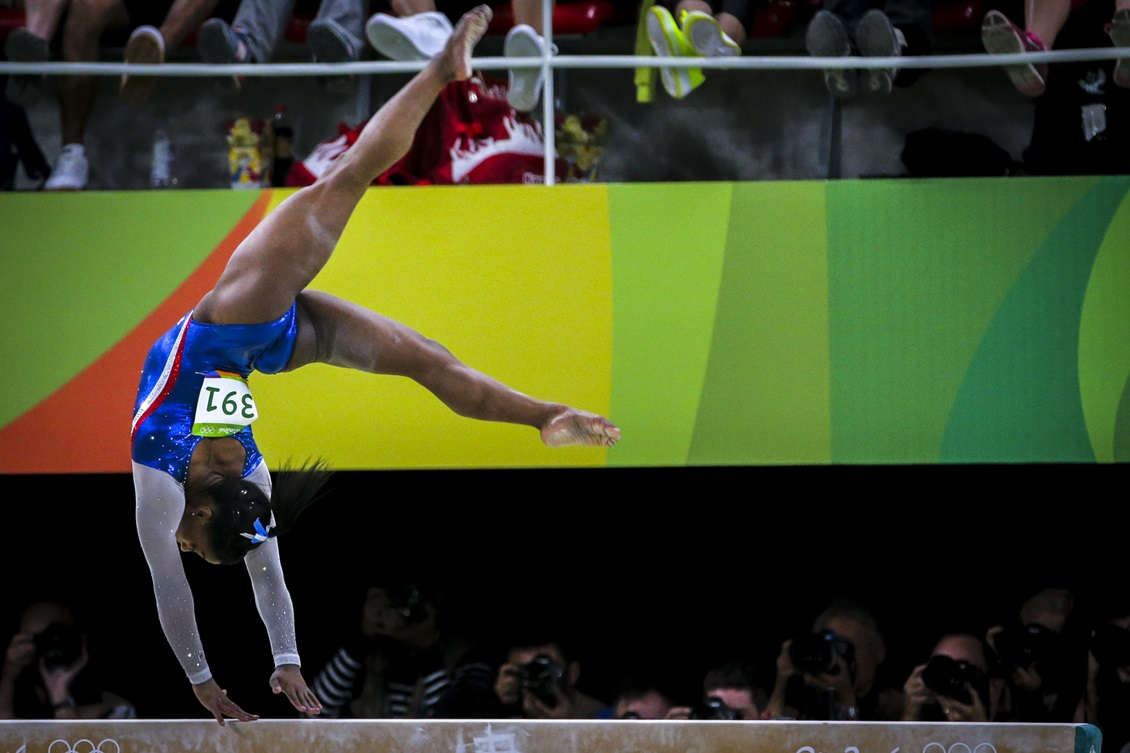 Simone Biles, the winner in the all-around gymnastics competition among women at the 2016 Summer Olympic Games in Rio. Photo by Danilo Borges under CC BY-SA 3.0 license.

Some of our current work at the Justice and Gender-Based Violence Research Initiative focuses on how cultural ideals and stereotypes impact achieving justice in response to sexual assault. Girls and women are punished for behaviors that are considered unfeminine—that do not check all the boxes of a patriarchal society’s cultural ideals of who is worth societal interest and protection and what a woman should be. Even those who conform to hegemonic femininity and its stereotypes of what a girl should be (e.g., sweet, kind, gentle, and well-behaved) find their worth calculated conditionally, with points deducted for every step away from the measure of a “good girl.”

Women and girls who speak up and speak out against sexual violence are often admonished for their words. Such silencing is even more likely for marginalized women and girls, who also are the victims of gendered racism. Daily we see reports of sexual assault and violence against women, with this underlying question: What is a girl worth?

The egregious oversight by United States of America Gymnastics and the United States Olympic & Paralympic Committee in the matter of Dr. Larry Nassar is a shocking example of what happens when an institution places a girl’s achievements, in this case medals and titles, above all else. The case of elite gymnastics is an interesting one; the environment is notorious for its toxicity and commitment to winning despite the injuries endured and the mental health battles ignored.

Simone Biles, the greatest gymnast of all time, made the decision that Kerri Strug didn’t feel she could make, on the exact same event.

This toxic environment was not kept entirely secret either: Kerri Strug became a household name for her iconic one-foot landing on the vault during the team final competition in the 1996 Olympics in Atlanta. While widely regarded as a feat of the human body as well as an athlete delivering for their team through adversity, it was actually an insight into the mentality of gymnasts, specifically under the eyes of USA coaches Marta and Bela Karolyi. Strug completed her second vault that day––injured––because there was no other option. She probably didn’t feel like she could say “no, I can’t do this” because all her life, her body and what it could do––compete in international gymnastics competitions and deliver wins––was given more value than her wellbeing.

We saw this phenomenon rearing its head over 20 years later at the 2020 Olympics in Tokyo. But this time, a very different decision was made. Simone Biles, the greatest gymnast of all time, made the decision that Kerri Strug didn’t feel she could make, on the exact same event.

After completing her first vault in the team final competition, while suffering from the “twisties”––during which a gymnast gets lost in the air during twisting skills, posing a significant risk to their safety––Biles admitted that she couldn’t continue competing. This decision quickly caught the attention of every viewer of the Games, and sparked online debates about whether she made the right or wrong decision.

There is no question that Biles made the correct decision. Getting lost in the air on any one of the incredibly difficult skills that she completes in her routines could be lethal, and the idea that she should muscle through it or should have continued competing for her team is not only incorrect but extremely harmful. These ideas bolster the environment that these gymnasts are so used to: one that does not care about what they think, how they feel, or how their bodies feel, but only cares about what their bodies can produce.

Biles had already changed the face of gymnastics . . . But now, perhaps more importantly, she has taught future generations of gymnasts, and young girls in general, that they are worth more than how they look.

This is the exact environment that allowed Larry Nassar to abuse young gymnasts for so long. Through years of being ignored when informing coaches of injuries they sustained, and being shunned by national team personnel when they did not perform well at a meet, these young girls were told in their everyday experiences that their testimonies carried no weight. They were taught that only their performances mattered. And the only adult around who acted like he cared was the one abusing them. Nassar painted himself as the only adult on their side.

Young gymnasts’ bodies were their tickets to the Olympics, but their bodies were not their own. They were treated as commodities and their reports of abuse were silenced or ignored. Finally Nassar was exposed as a predator. Finally the world began to realize just how toxic the environment of elite gymnastics was. How could a culture that valued the bodies and the voices of young girls equally ever allow someone like him to abuse them for so long?

Biles had already changed the face of gymnastics, solidifying herself as the greatest of all time. But now, perhaps more importantly, she has taught future generations of gymnasts, and young girls in general, that they are worth more than how they look and what they can produce, that their voices matter, and that their words carry weight. This is an important step forward in helping girls––and the world at large––understand their worth.

Simone Toney is a student at Wellesley College graduating in 2023. She was awarded the Class of 1967 Internship to work with Dr. Linda Williams on several large research projects of the Justice and Gender-Based Violence Research Initiative.

No comments made yet. Be the first to submit a comment
Internship Reflection: Examining the Role Fathers ...
National Student Parent Month is Coming to an End,...

More posts from author
March 04, 2022 Ukraine and the Importance of International Collaboration When it Comes to Research and Action
June 14, 2021 Urging the Biden Administration to Change Rules for Colleges on Responding to Sexual Assault
April 09, 2021 Combating Sex Trafficking of Children and Teens