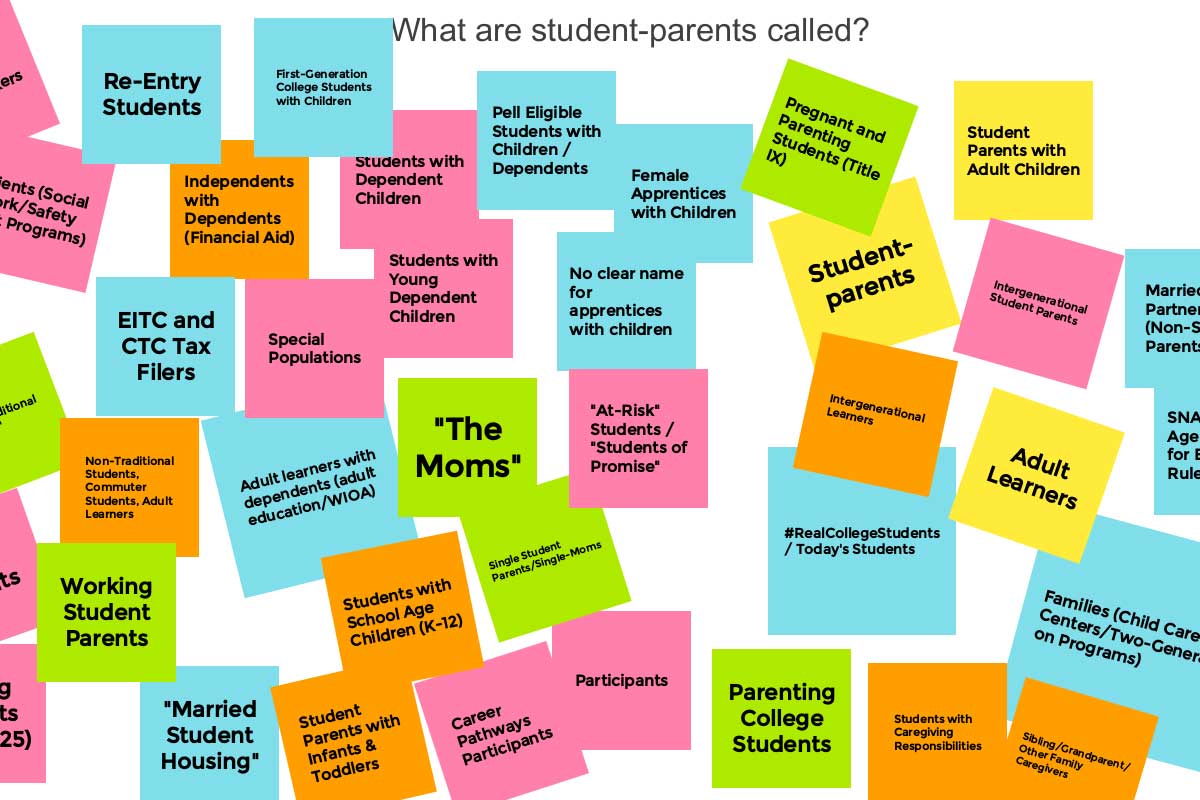 This digital whiteboard was developed in an exercise called "What are Student Parents Called?" which was part of the Student Parents at the Center project, a collaboration between WCW and the Urban Institute.

When your work aims to help call attention to an invisible population, it’s important to figure out which term best identifies that population. Terminology shapes how we think about groups of people, and how they think about themselves.

So what exactly are the nearly 4.8 million undergraduate and graduate students in the U.S. today who are raising children while taking classes called? Pregnant and parenting students? Student parents? Parenting students? College students with kids? Something else?

Though I used to use the term “student parents,” lately I’ve been leaning more toward “parenting students.”

The term parenting student acknowledges that students who have children commonly identify first and foremost as parents, prioritizing their kids’ wellbeing and care over their classes, homework, jobs, and other non-parenting responsibilities. It uses active language that acknowledges all students who are actively parenting in college, including those who may not be biological or adoptive parents or even identify as parents, but are certainly performing the roles and work involved in parenting.

Questions around the terminology used to describe and identify students who are pregnant and parenting aren't new. It’s actually an issue that we’ve been discussing in this field for many years. This fall as part of WCW’s Student Parents at the Center: Building a Policy Road Map project (a partnership with the Urban Institute), we completed a brainstorming activity with about 40 policy experts, scholars, and student parents from across the country. The group filled three digital whiteboards with about 75 post-it notes listing various names for pregnant and parenting students and sub-populations that are part of this demographic. The names ranged from “non-traditional students” to “caregiving students” to “parent scholars,” and included sub-populations like “students of color with children” and “LGBTQ+ student parents.”

There are several reasons why there are so many different terms to describe parenting students. Among them are the history and diversity of this group.

. . . pregnant and parenting students are one of the most diverse student populations. While they share many characteristics, they also have distinct and unique experiences reflecting their intersectional identities.

Historically, before 2010, there hadn’t been much consideration of pregnant and parenting students in higher education as a collectively defined group. Terminology to describe students who were parents in college was often more specific, because postsecondary programs, research, and advocacy was more focused on certain populations. After World War II, when colleges first started to acknowledge and create programs on campus, it was in response to student veterans with families (mostly dads) who came to college on the GI Bill. In the 1960s and 1970s after more women began gaining access to college, terms like “returning students,” “non-traditional students,” “displaced homemakers,” and “student mothers” became more common.

In the 1980s as more low-income, young, and BIPOC students gained access to college, terminology shifted to highlight “welfare mothers pursuing postsecondary pathways,” while some programs began to focus specifically on special high-needs populations such as single mothers, young mothers, and “women in transition.” After welfare reform in 1996 blocked many public assistance recipients from pursuing or completing college, terminology expanded to consider “low-income mothers in higher education,” since many of them were forced to forgo welfare. The term “student parents” became the most widely used vernacular after 2010, having been popularized through shared use by advocates and researchers.

In addition, pregnant and parenting students are one of the most diverse student populations. While they share many characteristics, they also have distinct and unique experiences reflecting their intersectional identities. Some researchers, programs, and policies focus on specific groups of parenting students, and therefore use terms like single mother students, student dads, young student parents, returning student parents, non-parent student caregivers, etc.

The language used to identify us matters, especially when we are members of marginalized groups. I became a parent while in college over 20 years ago now, and the way I identify myself has evolved since that time—as it evolves for many student parents. I’m now the director of the newly renamed Higher Education Access for Parenting Students Research Initiative here at WCW, which going forward will include the term “parenting student” largely due to Title IX, as well as its inclusiveness, action/role orientation, and parent-first language.

What matters most to me is not settling on a particular way to identify this group of people but ensuring that they have a voice in the ongoing conversation about how they are identified.

But I’m also sensitive to the diversity of terms that are out there, and the fact that some parenting students prefer to be called student parents, or identify more strongly with other terms. Thus, when writing and speaking about this population, I’ve decided that the best way to honor and respect student input, voice, and diverse self-identities is to use various terms interchangeably, including terms describing sub-populations of parenting students where it’s appropriate.

What matters most to me is not settling on a particular way to identify this group of people but ensuring that they have a voice in the ongoing conversation about how they are identified. In fact, I want to make sure they have a voice in all conversations that relate to decisions made about them (which is why hiring and supporting student parents as research fellows and expert contributors is a core aspect of our research initiative).

Finding the right terminology to talk about this demographic is a complicated process. Parenting students are a diverse bunch, and their experiences can vary widely depending on other identities they hold. The complexity of the language teaches us a lesson about the complexity of student parents as a whole: They are not a monolithic group. That’s important for us to remember as we work to understand their needs and find ways to support their success.

Autumn Green, Ph.D., is a research scientist at the Wellesley Centers for Women studying higher education access for parenting students. Dr. Green is nationally recognized for her scholarship on the lives of parenting students and has worked to create two-generation programs on college and university campuses.

More posts from author
May 06, 2022 This Mother's Day, Let's Celebrate College Students Who Are Mothers—By Counting Them
January 13, 2022 Making Peace with the Outcome: Remembering bell hooks
September 30, 2021 National Student Parent Month is Coming to an End, But Our Work Carries On