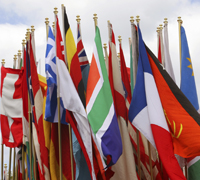 The following blog article was posted onHuffington Post, March 25, 2014 by Alex Sanger, chair of the International Planned Parenthood Council and member of the Wellesley Centers for Women Council of Advisors.

After two weeks of intense negotiations, the 58th session of the Commission on the Status of Women ended early Saturday morning with a strong call to prioritize gender equality and the human rights of women in order to achieve sustainable development.

The Commission was convened at the UN headquarters in New York to address the challenges and achievements of the Millennium Development Goals (MDGs) in improving the lives of women and girls in developing countries. While the MDGs resulted in a reduction of poverty in some respects, the goals furthest from being achieved are those focused on women and girls -- particularly on achieving gender equality and improving maternal health. With the MDGs set to expire in 2015, the Commission's outcome document will help shape priorities for the next global development framework.

The Commission specifically called for a stand-alone goal on gender equality, a move that was applauded by women's rights activists.

A stand-alone goal on gender equality signals that gender equality and women's rights are important in and of themselves, as well as a priority for governmental investment. It recognizes that sustainable and meaningful development must address the root causes of gender inequality, which deny women and girls an education, the right to make decisions about their bodies and childbearing, to decent employment -- and equal pay for equal work -- and to live free of violence. 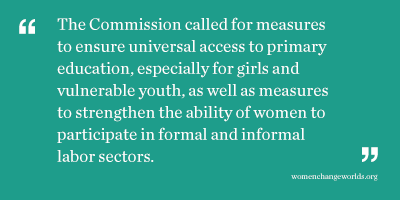 The Commission also stated that the post-2015 development agenda must include gender-specific targets across other development goals, strategies, and objectives -- especially those related to education, health, economic justice, and the environment. It also called on governments to address the discriminatory social norms and practices that foster gender inequality, including early and forced marriage and other forms of violence against women and girls, and to strengthen accountability mechanisms for women's human rights.

The Agreed Conclusions reaffirmed the Cairo Programme of Action as well as the Beijing Platform of Action, which called for investments in "quality comprehensive sexual and reproductive health care" including emergency contraception, information and education, safe abortion where allowed by law, and prevention and treatment of sexually transmitted infections and HIV. Furthermore, the Conclusions called for the recognition of the human rights of women to "decide freely and responsibly on matters related to their sexuality... free from coercion, discrimination, and violence."

Member States also recognized that progress toward achieving the Millennium Development Goals -- which include eradicating poverty and expanding access to health services such as reproductive health -- has been held back due to persistent "unequal power relations between women and men," particularly discriminatory laws, social norms, and gender stereotypes.

The governments expressed concern that several critical issues related to gender equality were not adequately addressed by the MDGs, including violence against women and girls; harmful practices such as early and forced marriage and female genital mutilation; women's and adolescents' sexual and reproductive health and reproductive rights; women's and girls' disproportionate share of unpaid work, particularly unpaid care work; the gender wage gap; women's equal access to and control of resources including land; women's inheritance rights; and women's full participation in decision-making at all levels.

The Commission called for measures to ensure universal access to primary education, especially for girls and vulnerable youth, as well as measures to strengthen the ability of women to participate in formal and informal labor sectors. The governments also called for efforts to ensure that women's rights and health obtain the prominence they deserve in the next global development framework.

Women's health and rights organizations applauded governments who stood up for the rights of all individuals to live free of violence, discrimination, and barriers to accessing sexual and reproductive health services, particularly for girls. However, advocates expressed disappointment that a small minority of conservative governments spurred on by the Holy See--which holds special observer status at the UN -- held up negotiations by objecting to concepts as fundamental as gender and the human rights of women throughout the two weeks of negotiations.

In particular, advocates noted that, despite a 20-year legacy of UN prohibition of discrimination and violence based on sexual orientation and increasingly on gender identity, government delegates gave in to pressure to exclude recognition of these violations in the final agreed conclusions.

No comments made yet. Be the first to submit a comment
A Case of Structural Racism
Computer Literacy: A valuable skill for all girls ...