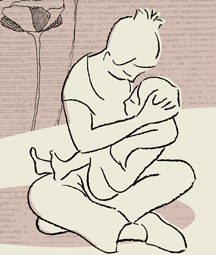 This article was originally published December 19, 2013 on Girl w/ Pen by Susan McGee Bailey, who served as executive director of the Wellesley Centers for Women and a Professor of Women’s & Gender Studies and Educationat Wellesley College for 25 years.

Heather Hewett’s December 5th blog post on Girl w/Pen, “What’s a Good Mother?” hit a nerve. My daughter Amy was born in 1970, the same year Shulamith Firestone’s The Dialectic of Sex and Robin Morgan’s anthology, Sisterhood is Powerful were published. Betty Friedan’s Feminine Mystique had already become part of my daily conversation. I read Firestone, Morgan, Germaine Greer, Our Bodies, Ourselves—everything I could find on ‘women’s liberation’. It all made so much sense. My husband and I agreed; we would share parenting. Our family wouldn’t follow the usual gender patterns, we’d be equal partners and we’d steer our daughter clear of sex stereotyped toys, clothes, and expectations. A huge cultural shift was underway; we’d be part of it.

We have been; but not in the ways I anticipated 40 years ago. Children complicate lives in unexpected ways. Amy was born with a variety of disabilities, some immediately evident, others less so. She tested our facile feminism; we chose different answers. I am a single parent.

Parenting a child with physical and developmental challenges is a politicizing activity. Mothering such a child alone is a radicalizing one. Mothering a child with disabilities requires not only the culturally sanctified female roles of caregiving and ‘traditional good mothering’, but aggressive independent action. You must lobby the legislature, pressure the school board, argue with the doctor and defy the teacher. And, oddly, while these ‘unfeminine’ behaviors might, in other contexts, be deemed deviant or too aggressive, performed in the context of mothering a child with special needs they are considered appropriate, even laudable. 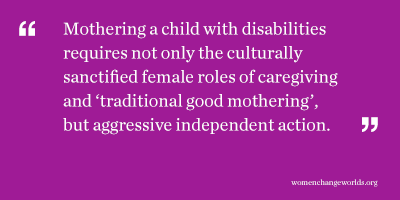 But for a single mother, even this culturally permissible deviance is insufficient. My life with Amy is different from the lives of most of my colleagues and friends. I could not provide emotional, physical and financial support for Amy without re-envisioning motherhood. Amy and I have lived with a shifting assortment of male and female students, single women as well as married women with children. Work for me is not possible without round the clock care for Amy. This is true for all mothers and children, but it is a need that is normally outgrown. Not so in our case. Amy fuels my passion for feminist solutions; not simply for childcare, but for policy issues across the board. I know first hand too many of the dilemmas confronting women, from the mostly invisible, predominately female workers who care for others in exchange for poverty level wages to successful business women struggling to be perfect mothers, perfect wives and powerfully perfect CEOs.

While there may be no individual solutions, there are individual decisions. As a mother and a feminist, I long ago made the decision to work toward a society in which power and responsibility as well as independence and dependence are equally available to women and men.

But it’s a lovely winter day, snow is sparkling on the pine trees, and across the street children are sledding. To talk of the challenges of motherhood without sharing the lessons in joy Amy offers is only a part of the story. My particular good fortune is in Amy’s special way of seeing the world. Oliver Sacks in The Man Who Mistook His Wife for a Hat writes about people he calls ‘simple’. “If we are to use single word here, it would have to be ‘concreteness’--their world is vivid, intense, detailed, yet simple, precisely because it is concrete, nether complicated, diluted nor unified by abstraction.” Amy never misses a sunset, a baby or a bird. She notices and she insists that others notice.

I hurry to see red bird. What kind of silly person would think it reasonable to miss a cardinal in the snow?

This is only one of many joys my daughter has taught me.

It’s the Christmas season, a time of hope. Lately life has begun to look bleaker each day as we move further toward a nation of haves and have nots; but today I choose to believe in hope. Someday, not so far away, women and men working together will beat the odds. We will succeed in creating a more just and equal world.

Susan McGee Bailey, Ph.D. has received numerous awards for her research and public advocacy, is frequently quoted in the media, and has appeared on a variety of radio and television programs. In 2011 the National Council for Research on Women spotlighted her as a feminist icon. She has worked for more than 35 years with community organizations addressing the needs of disabled children.

No comments made yet. Be the first to submit a comment
The Good, the Bad and the Ugly: Women's Rights in ...
Provocative Discussions on Women, Writing, Art, So...