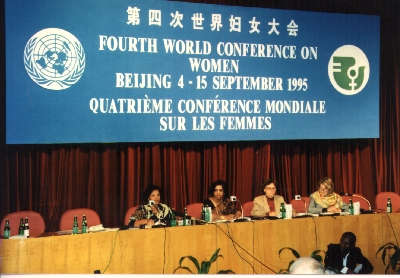 This article, by Susan McGee Bailey, was originally published on the Girl W/ Pen blog on March 20, 2015.

“Fighting for women’s equality is an arduous but necessary process, ploddingly pursued by dedicated women and men who refuse to accept a lesser role for women in society.” Jean Hardisty (1945-2015)

March is Women’s History Month, but the history being made in the U.S. is far from uplifting. Women continue to be an easy batting ball for political impasses. We continue to struggle for basics readily available in most other developed nations: e.g. paid family and sick leave, adequate childcare, health and reproductive rights. As an antidote to setbacks in this country—where we seem to be in the two-steps-back phase of the old ‘three steps forward, two steps back’ adage—I’ve looked at reports released in conjunction with this month’s 59th Session of the UN Commission on the Status of Women (CSW). There are some encouraging signs. But progress is slow, uneven; the struggle for women’s rights and equality is far from over. Nevertheless, celebrating positive accomplishments can provide motivation needed to keep us all plodding ahead, no matter how soggy the road. Jean Hardisty knew better than anyone how critical plodding along is. For all of us around the country—and in various corners of the world— who knew Jean as a beloved colleague, mentor and leader in the battle for human rights and justice, there is no better way to honor her life and her work than to keep on plodding.

So, some good news gleaned from reports on progress for women since the 1995 United Nations Conference on Women in Beijing:

Sadly, for almost every positive statement one can make, there is a ‘but’. And some ‘buts’ are so overwhelming it seems pointless to mention the positive. For example, awareness of violence against women has grown, but the violence itself has not lessened. A third of the world’s women have experienced physical or sexual violence. It is estimated that the number of girls among trafficking victims has increased by more than ten percent in the past seven years.

The Beijing meetings two decades ago were electrifying. A total of 17,000 women and men from 189 countries attended the official Fourth United Nations Conference on Women. Another 30,000 took part in the parallel NGO Forum held outside the capital in Huairou. We returned to our homes around the globe committed to doing whatever we could, both individually and collectively, to implement the Beijing Platform for Action. Many of those unable to attend the meetings in China were eager partners. In country after country, women and men worked together to ensure the "full and equal participation of women in political, civil, economic, social, and cultural life."

But the transformative promise of the Beijing Platform for Action has not yet been fulfilled. The Platform was a call for a change in focus from women to gender. A call for recognizing that the structure of society and relationships between women and men must be rethought if women are to be fully empowered as equal partners with men. The Platform affirmed that women’s rights are human rights, that gender equality benefits everyone. In retrospect these called for changes in thinking and action were exceedingly ambitious given the ten-year time frame originally stated. Even after 20 years we have not succeeded. But ambitious goals generate ambitious plans, and ambitious plans are required to sustain commitment, passion, and determined action.

As the Women’s Rights Caucus stated last week in response to the draft declaration from CSW: “At a time when urgent action is needed to fully realize gender equality, the human rights and empowerment of women and girls, we need renewed commitment, a heightened level of ambition, real resources, and accountability.” Some UN member states may not share this perspective. Nations that do must speak loudly. Within a few days over seven hundred and 50 organizations had signed the caucus statement. NGOs representing women from all parts of the world and all strata of society must push, and push hard to ensure that the spirit as well as the letter of the Beijing Platform is carried forward.

None of this work is easy. Much of it is unpopular in certain circles. But we have pushed and plodded our way this far. A 40 percent decline in maternal morbidity is a major step forward. The progress in access to primary education for girls is impressive. Many more huge steps await. We have done it before; we can do it again. And again, and again, and again!

Susan McGee Bailey, Ph.D. served as Executive Director of the Wellesley Centers for Women and a Professor of Women’s & Gender Studies and Education at Wellesley College for 25 years. She attended the Fourth World Conference on Women in Beijing.

No comments made yet. Be the first to submit a comment
Equal Pay Day & A Woman's Worth
In Memoriam: Jean Hardisty