A Global View on the Research-and-Action Connection: Ending Gender-Based Violence in Ghana

“16 Days of Activism against Gender-Based Violence” is an annual campaign sponsored by UN Women to raise concern about violence against women and girls and to highlight efforts at its eradication around the world. It commences on November 25th, International Day for the Elimination of Violence against Women, and terminates on December 10th, Human Rights Day. It just so happens that I was in Ghana at the beginning of this year’s campaign. While my visit required me to sacrifice Thanksgiving with my family back in the States, I came home so grateful for everything I had learned and all of the people I had met that I really want to share some highlights, in the interest of the collective movement to end gender-based violence around the world, of which the Wellesley Centers for Women is a part. 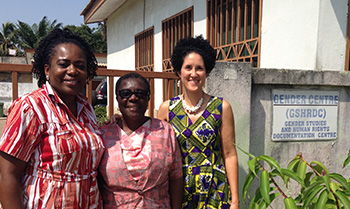 WCW Council of Advisors member Abigail Burgesson and WCW Executive Director Layli Maparyan with Dorcas Coker-Appiah, Founder and Executive Director of the Gender Centre.My first visit was to the Gender Studies and Human Rights Documentation Centre, a research-and-action institute in Accra founded and led by Cllr. Dorcas Coker-Appiah. The Gender Centre (as it is known) established itself by conducting Ghana’s first landscape study of violence against women in 1997. This study became the basis for Ghana’s first comprehensive domestic violence policy, authored in 2001 and signed in 2007. Prior to the passage of this law, rape was the only legally recognized form of violence against women, and the existing law denied that rape could take place between married persons. The new domestic violence law, by contrast, recognizes manifold types of domestic violence, including physical abuse, sexual abuse, economic abuse, emotional, verbal, or psychological abuse, and harassment, including sexual harassment. While the law denying marital rape had to be overturned separately, this too was accomplished, making Ghana’s Act 732 a model for gender-based violence policy across Africa, particularly in places where no such comprehensive domestic violence law exists.

The Gender Centre’s landscape study was accomplished with the help of partners across the country. While the Gender Centre developed the research protocol and trained the researchers, it relied on data collectors based at other NGOs and CBOs in different regions around the country to conduct the actual data collection. The research protocol incorporated data triangulation involving legal and policy research, focus groups, and individual interviews to ensure robustness and validity across means of collection. Once the study was completed, a coalition of institutional actors, supported by the African Women’s Development Fund, was convened to conduct public education and stakeholder sensitization about domestic violence in advance of writing and shepherding the policy through the legislative process. The end-result was the creation of buy-in across the country for the new domestic 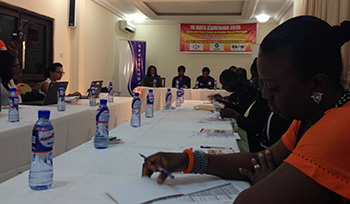 "16 Days of Activism" Event hosted by WiLDAF Ghanaviolence law. Once the law was passed, efforts were made to capacitize the judiciary system and buttress the police force, as well as to increase the capacity of the health system to deal with domestic violence cases. In fact, a Domestic Violence and Victim Support Unit (DOVVSU) was created within the Ghana Police Service and training on domestic violence was mainstreamed into the police academy curriculum. Other social actors inside and outside government also rose to support the new law in ways relevant to their respective missions.

One such organization was WiLDAF Ghana, the Women in Law and Development in Africa Association. The day after visiting the Gender Centre, I was able to attend WiLDAF’s half-day “Learn and Share Event on Gender Based Violence,” which was part of Ghana’s 16 Days of Activism against Gender-Based Violence programming. This workshop brought together women lawyers and judges, women and men from the Ghana Police Sercie, representatives from various NGOs (including AWDF, Oxfam, and the Ark Foundation), a leading disability rights activist, members of the religious community, and a number of journalists from various media to discuss issues of coordination. Officers from the Ministry of Gender, Children, and Social Protection were also invited. The idea was that all of these groups needed to work together in an integrated fashion to insure the fullest implementation of the law and to reduce gender-based violence in Ghana. One premise was that meeting face-to-face and knowing each other in person would accelerate the process. 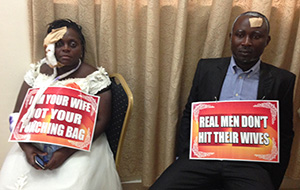 One conundrum that was discussed is the fact gender-based violence statistics have gone up in recent years in Ghana, begging the question of whether domestic violence really is on the rise or, alternately, whether the new law has merely increased reporting of incidents due to society-wide sensitization. Although both factors may be at play, there was general agreement that the law was a necessary intervention on an unacceptable situation--broad scale gender-based violence in Ghana. (Of course, lest anyone single Ghana out, the World Health Organization recently released figures that 1 out 3 women worldwide has survived one or more acts of gender-based violence--the global mean is 35 percent, with country-by-country prevalence rates ranging from 17-71 percent.) In fact, WiLDAF staged some public street theatre 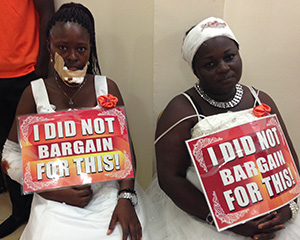 Street theatre performers who raised visibility about gender-based violence at a busy intersection during rush hour in Accra.that very morning to drive home this point, placing actors depicting bloody and bandaged brides and a groom at a busy intersection wearing placards that read “I did not bargain for this,” “I am your wife, not your punching bag,” “Real men don’t hit their wives,” and “Stop gender based violence” on their bodies. One way in which this demonstration reflected cultural particularities was the fact that the groom was dressed like an older man with gray hair, suggesting indirectly child marriage as a form of gender-based violence which also must end. After the street demonstration, the actors appeared at the workshop.

The following day, I had the pleasure of lunch with an interdisciplinary group of scholars from the Center for Gender Studies and Advocacy (CEGENSA) at the University of Ghana, Legon, led by sociologist Dr. Akosua Darkwah. Over lunch, we discussed the evolution of domestic violence shelters in Ghana and the struggles that many of them--and their inhabitants--face. There is still only one fully functioning domestic violence shelter in Ghana, which is run as a joint venture between the Ark Foundation and some private individuals. There is only one other shelter in the country, run by the state exclusively for children but not women. Exposure to sexual violence, especially incest, is a common reason for women (or girls) to come to the shelters. One common scenario is a girl who has been subjected to incest arriving at the shelter with her mother, who stays with her; another common scenario is an adolescent woman coming to the shelter by herself because she has been shut out by her family for levying claims of incest. In both cases, those who arrive tend to come and stay indefinitely, rather than staying or a period of time and then leaving. One reason is the lack of additional support services in Ghana; another reason is the extreme psychological and social difficulty of existing without family support in the Ghanaian context. For example, in a country where marriage is extremely important for social status and acceptability, people can’t marry without an extended family entourage. For women who have been ejected from their families, such family support disappears.

Layli Maparyan with researchers from CEGENSA.Shelter staff will create family around those who come to live there, giving names, especially to babies who are born of incest, which provides them with new social identities as part of a family group. While the culture of shelters is still evolving in Ghana, particularly as the legal architecture that supports survivors of gender-based violence (e.g., restraining orders and their enforcement) continues to evolve simultaneously, these few anecdotes demonstrate the creative ways that those who care about and care for survivors are attempting to solve complex challenges. As my colleagues from CEGENSA noted, there is ripe room for research in this area--research that would help inform action.

I lift up the work of the Gender Centre, WiLDAF, and CEGENSA because, together, they demonstrate the research-and-action connection that is so near and dear to us here at the Wellesley Centers for Women. Researchers at the Gender Centre identified a crucial policy gap, designed and executed a comprehensive study to fill in that gap with 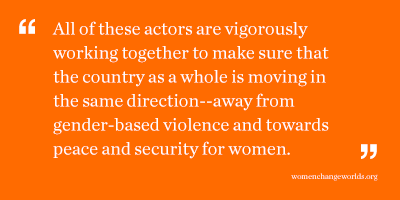 data, convened a group of stakeholders to write new policy, and shepherded the draft policy through the national legislative process while simultaneously engaging in public education so that the government and the people were in it together. They needed to piece together support from many sources over many years to make this happen. Many others who also cared passionately about ending gender-based violence worked with them or supported this work. Now, as Ghana looks ahead the tenth anniversary of its landmark domestic violence legislation, the country can claim many accomplishments. These include the expansion of its judiciary system to address gender-based violence, a sensitized police force that includes a domestic violence unit, and the leadership of its Ministry of Gender, Children, and Social Protection. It also includes increased awareness of groups with special vulnerabilities (such as people with disabilities), and the education and sensitization efforts of numerous NGOs like WiLDAF and academic institutes like CEGENSA. All of these actors are vigorously working together to make sure that the country as a whole is moving in the same direction--away from gender-based violence and towards peace and security for women. Other countries can learn from Ghana --and other countries can increase the link between research and action to end gender-based violence.

Layli Maparyan, Ph.D. is the Katherine Stone Kaufmann '67 executive director of the Wellesley Centers for Women and Professor of Africana Studies at Wellesley College.

A Global View on the Research-and-Action Connection: Ending Gender-Based Violence in Ghana> This article is very useful. Very good article. Thank you for telling me about this article. I know of a school & fashion house that has a good education in fashion. best fashion design schools in accra Riohs Originate is a Creative Art Service and Training Institute in Ghana.
They provide services and training for individuals/organizations that value their image, style, color and insist on promptness, accuracy and consistency.
best fashion schools in accra ghana

0 Cancel Reply
A Global View on the Research-and-Action Connection: Ending Gender-Based Violence in Ghana> This article is very useful. Very good article. Thank you for telling me about this article. I know of a school & fashion house that has a good education in fashion. best fashion design schools in accra Riohs Originate is a Creative Art Service and Training Institute in Ghana. They provide services and training for individuals/organizations that value their image, style, color and insist on promptness, accuracy and consistency. best fashion schools in accra ghana
Cancel Update Comment
1
The Right to Research: How Data Helps Women’s Huma...
Why Are There So Few Women Leading Theatres and Wh...