How Asian Women (and Men) are Dehumanized

Professor Lee wrote this reflection the day after eight people, including six women of Asian descent, were killed at spas in the Atlanta area, and shared it with the Wellesley College community. It is posted here with her permission. 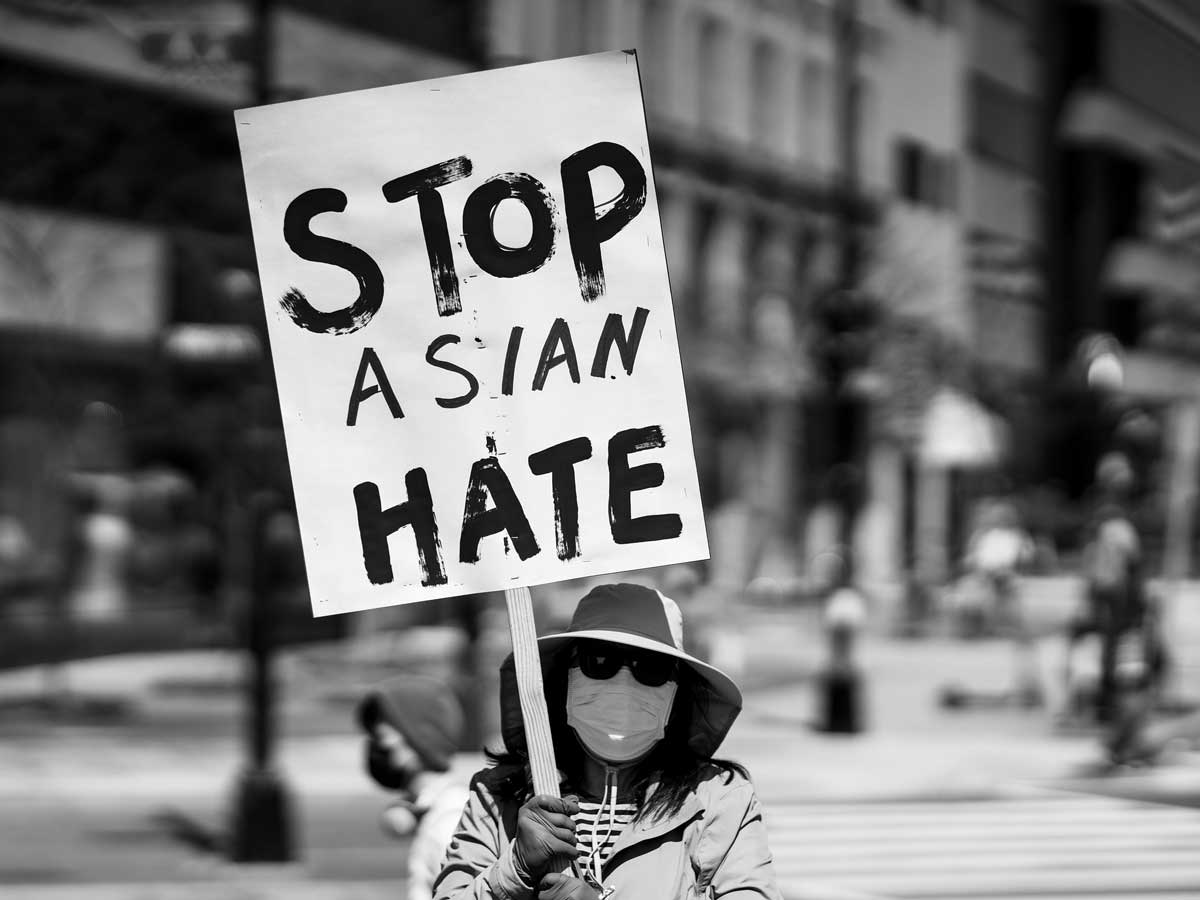 Stop Asian Hate by Miki Jourdan. DC Rally for Collective Safety; Protect Asian/AAPI Communities; McPherson Square, Washington, DC. CC BY-NC-ND 2.0 license. I spent much of yesterday in a spiral of grief, fear, and rage, thinking, among other things, about mace and bulletproof vests, wondering whether Wellesley should provide them for our Asian American students (do you know how many students of Asian descent we have? each one an individual, with their own hopes, fears, quirks, talents, ambitions, with their own sense of humor, their own way of experiencing the world)...

You may have seen or read about the news conference yesterday at which the Cherokee County Sheriff’s Office spokesperson (a monster who is in charge of communication and community relations, unbelievably enough) spoke lovingly and sympathetically of the man who hunted down Asian women in cold blood, driving miles to do so. Throughout the day, this murderer was portrayed by media as innocent, church-going, pious. He loves pizza, drums, going to church. Apparently also Asian women. He was just "having a bad day." Just reached the end of his rope. Poor, good kid! If only those Asian women were not so tempting! (“[It's] a temptation for him that he wanted to eliminate.")

The names of two of the four Korean women murdered have not even been released (what did they like to eat or do in their spare time, if they had any, I wonder; my 94-year-old Korean mother-in-law also loves pizza). To America (and, yes, even here at Wellesley), Asians are faceless numbers or bodies. Just faceless numbers or bodies: bodies that are sometimes grudgingly tolerated at the table for the sake of "diversity," sometimes held up like a shield to protect white supremacy or used as a weapon to injure other people of color, sometimes fetishized and lusted after, sometimes (most of the time, now) beaten, spat on, or shot. Getting back to the bullet-proof vest idea: I'm afraid to go outside.

To call things "microaggressions" (like being yelled at to "go back where you came from") is misleading. If you've ever experienced one, you know that it's only the tip of a gigantic iceberg of hatred that's coming right at you. Sometimes that hatred boils over; at other times, it congeals into a huge, massive, cruel indifference. Asians suffer or die—so what? Aren't they just funny little people (or sexy little people) who are meant to stand in the background, serve you, not speak or have opinions or lead, god forbid! Supposed to give you nice massages or paint your nails, get out of the way (or be gotten out of the way, with millions of tons of napalm if necessary), and, most importantly, weren't they put on earth to be the butt of jokes everywhere, in public and in private, among liberals and conservatives?

Aren't there just too many Asians, always too many of them? Are we not a horde, a tide, too many to even count? And for us, the psychic cost of knowing that hatred—well, just try to imagine it, if you are so fortunate as not to know from your own experience what it's like to be hated or despised. Reading Asian Americans write about their shame and self-hatred breaks my heart; I can't do it any more.

I am not asking for your sympathy. I'm an old, tenured member of the faculty, and I will be fine. But I needed to express some of this bitterness of soul, as I look for ways to turn my rage and grief and fear into action. I would ask you to think about the people of Asian descent you encounter (as individuals with distinct faces, names, and histories) and to think about how we can extend some of the love and sympathy that was lavished on the white murderer to members of our own community, who have been and will be receiving all the effects of the obscene legacy of Trump.

The police and the media still refuse to call it a hate crime. They take the murderer at his own word that he was not racist: as if to dehumanize Asian people into a trope of "sexual temptation" were not obscenely racist and misogynist. I ask you to please, please, stop denying that racism exists or that it rules our lives, determines where we can and cannot go, and suffocates human potential at every hour of every day for all non-white people (Breonna, George, Tamir, Travis...).

Please use the word when it's called for. Call racism by its name. Whatever your own race, you can call out racism when you see it. It's particularly urgent for white folks to do so; I can't emphasize this enough.

In case it wasn't apparent, some (though not all) of my remarks above are sarcastic. Also, I've been saying these things forever. Thanks for reading.

No comments made yet. Be the first to submit a comment
Liberia’s Education Crisis: Quality v Access
On Equal Pay Day, Researching Policies for a Gende...

"We Are Not Alone in Our Struggles": Mental Health Awareness Month