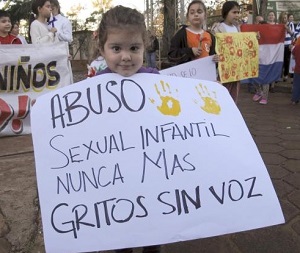 The following blog article and corresponding photo was posted on the New York Daily News, June 3, 2015 by Alex Sanger, chair of the International Planned Parenthood Council and member of the Wellesley Centers for Women Council of Advisors.

With Memorial Day behind us and summer here, most kids in New York are finishing school or preparing for camp or dreaming of pools and extended playtime.

But this summer will be very, very different for one 10-year-old girl in Paraguay. Because she’s pregnant.

The girl’s doctors discovered the pregnancy after she complained of a stomachache. But despite the fact that the girl is 10 years old and that doctors have identified the pregnancy — the result of the girl being raped by her stepfather — as dangerous and high-risk, the Paraguayan government has refused her access to an abortion.

In Latin America and the Caribbean, seven countries ban abortion under all circumstances, even to save the life of the mother. Paraguay is not one of them. Even though the law of the land states that abortions are legal in instances that pose a significant threat to the health of the mother, the Paraguayan government continues to deny this child access to a potentially life-saving procedure. This constitutes a cruel denial of the girl’s basic human rights, tantamount to torture.

My grandmother, Margaret Sanger, founded the organizations that would become Planned Parenthood Federation of America and the International Planned Parenthood Federation — to provide education and services to men and women in an effort to end injustices like violence against women and enforced pregnancy. She believed that providing access to contraceptives and reproductive healthcare was integral in empowering women to fully engage and participate in their communities and live the lives they want. I followed in her footsteps and, as the head of Planned Parenthood New York City, heard from countless women who needlessly suffered before abortion became legal in New York.

Cases like this 10-year-old’s make it clear that that needless suffering hasn’t ended, especially if you look abroad. For instance, one out of every three women in Latin America is a mother before her 20th birthday. 20% of all adolescent pregnancies occur among girls younger than 15, and are often the result of sexual abuse within the family. 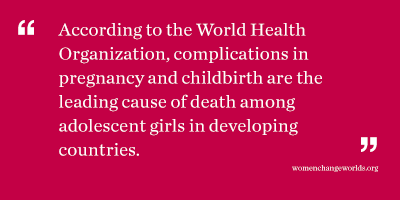 services to women and girls who need them. What our clinic staff has seen firsthand is that blocking access to abortion and comprehensive reproductive health care doesn’t stop them from being needed, or even stop them from happening — it just keeps them from being safe. Due in large part to extensive abortion bans throughout the region, 95% of abortions in Latin America are performed in unsafe conditions that threaten the health and lives of women.

In fact, according to the World Health Organization, complications in pregnancy and childbirth are the leading cause of death among adolescent girls in developing countries. Specifically, in Latin America, girls who give birth before the age of 16 are four times more likely to die during childbirth than women in their 20s.

And yet politicians around the globe — including in Paraguay and the United States — have shut their eyes to common sense and public health by continuing to ban and criminalize abortion, even abortion in cases of rape or incest. Children should not be forced into motherhood and doctors should not be kept from providing life-saving care just because of political hurdles.

And in instances like the 10-year-old girl currently pregnant in Paraguay, government officials shouldn’t be able to act counter to the spirit of the law and put young girls in serious danger because of political whims or extreme beliefs.

That’s why a broad spectrum of human rights and international advocacy organizations are calling on the Paraguayan minister of public health and wellbeing, Dr. Antonio Barrios, to immediately intervene and grant the girl access to safe abortion services. By doing that, Dr. Barrios would be upholding Paraguayan law and following the advice of leading international medical authorities — and, potentially, saving the life of a very real girl who has already survived more trauma than a child of her age should ever be forced to encounter.

No comments made yet. Be the first to submit a comment
Women's Soccer and the New Feminist Power
Healthy Young People Despite a World Filled With V...