Incidentally, measures on cyber bullying often only include benign annoyances that do not seriously impact others, whereas more severe and threatening types of cyber harassment aren’t often included in studies. It’s difficult to precisely determine prevalence (estimated at four to 72 percent) because there is no congruent and consistent definition of cyber bullying or cyber harassment across all studies. The U.S. Department of Justice’s Supplemental Victim Survey (part of the National Crime Victimization Survey) conducted in 20062 and the more recent National Intimate Partner and Sexual Violence Survey3 are the two largest and most representative national surveys of adult victimization that contained any form of cyber harassment. However, they each had only one or two questions on cyber stalking, rather than being able to capture which specific types of cyber bullying or harassment are present and in which populations. I believe that conducting prevalence studies within young adults, using measures that fully capture the broader range of digital offenses (i.e., sexualized, threatening, mob-based, or illegal), is critical.

I think that understanding how to combat cyber harassment requires us to shift the focus from one vulnerable population (minors under age 18) to another often misunderstood age subgroup—“emerging adults.” During ages 18-25, older adolescents often try on different adult roles and expose themselves to new experiences that turn into enduring choices about love and work4. Specifically looking at those who continue with formal education, I hypothesize that there could be upswings in digital abuse during the precarious life transition of graduating high school and leaving behind old networks to form new networks in college, at times in a new town and under a new roof. Also, different subgroups of college students can experience various types of online abuse (e.g., non-threatening and threatening, sexualized or non-sexualized). This new context in higher education can bring not only social challenges (e.g., fewer online restrictions, sexual discovery, peer pressure), but also increased access to hightech devices, as well as to peers who have the know-how to pull digital pranks which can be used maliciously (e.g. hacking into someone’s social media page) for digital abuse. In our own emerging work on cyber harassment, we were able to explore some questions about cyber vulnerabilities across subgroups that have had limited examination.

Media & Identity Study—Identifying underreported vulnerability
Funded by the Wellesley Centers for Women (WCW) 35th Anniversary Fund and a Robert Wood Johnson New Connections grant, our research team’s objective was to understand how media shapes the lives of our participants, particularly through online social networking. The cross-sectional online study5,6,7 involved innovative recruitment techniques to survey over 2,000 12-25 year olds from more than 140 schools in 47 states. Our mean age was about 19 years old, which meant that our data primarily addressed the college years. We explored different types of digital abuse such as spreading rumors, posting mean comments, receiving unwanted sex talk online, as well as if there were any significant associations with type of educational institution, race/ethnicity, socioeconomic status, and/or depressive symptoms.

Type of College Environment
Students attending public institutions, particularly community colleges, experienced significantly more cyber bullying than those attending private ones. Being cyber bullied and receiving unwanted sex talk online were significantly associated with being sad, particularly among those attending public colleges/ universities. I question whether perhaps at public institutions, due to the typically large size and high student/staff ratios, there is lack of social support regarding cyber harassment, therefore, a tendency toward feeling defeated that anyone can help. Conversely, at private institutions, maybe there are more restrictions on cyber rules of engagement amongst the student body or more mental health services and tailored policies that can address incidents as they occur.

Racial/Ethnic Disparities Within college populations, the average enrollment of African American (15 percent), Hispanic (14 percent), and Asian American (six percent) students means that participants from these racial/ethnic groups can often be too low8 to warrant racial/ethnic disparity analyses. Even nationally representative surveys of Internet and/or media use, such as the Kaiser Foundation media survey9 and the Pew Research on Internet10, are often unable to report on group differences for smaller racial groups, namely Asian Americans, Native Americans, and those who identify as mixed race because of their “representative” recruitment/sampling procedures. For our national online study we were able to recruit a large enough sample to detect that, for example, Asian Americans in our sample experienced significantly more cyber harassment compared to White, Black, Hispanic, and Biracial participants, and that White participants showed the lowest levels of cyber victimization. I believe that future research on digital abuse should include oversampling methods to recruit more racial/ethnic minority participants in order to increase knowledge about prevalence in overlooked subpopulations.

Socioeconomic Divide Finally, our study found that the lowest levels of mother’s education as well as low perceived socioeconomic status were both significantly associated with more cyber bullying victimization and experiencing unsolicited talk about sex online. Research shows that low-income people are more likely to be stalked11 and households with the lowest income levels are four times more likely to experience domestic violence than wealthier households12, so it’s essential that studies on digital abuse should not only be conducted in traditional four-year research-heavy graduate-level institutions, but also reach with college students on the lower to mid-range of the socioeconomic strata. Including community colleges in urban areas for instance—an under-resourced and understudied population with wider ranges of age, life experience, marital and parenting status, nationality, disability status, and nontraditional educational backgrounds—would make such examinations more comprehensive and meaningful. The inability to ascertain which are the most crucial ages or life transition points when cyber harassment is at its peak during the young adult (collegiate) years leaves academics and practitioners with uncertainty to whom and when to direct resources and support services. Generating cyber harassment research results targeted for college students could then be reported to on-campus health centers for prevention and intervention planning purposes. Collegiate institutions would be better informed as they tailor their guidelines on screening for mental health services as well as student disciplinary codes regarding cyber harassment amongst students. I am committed to developing new means of examining the global technological revolution that can include unfortunate consequences such as increased digital abuse. It is my aim to forge new collaborations to find practical and effective solutions to invite serious community dialogue and improve human wellbeing both online and offline.

​1 Tokunaga, R. S. (2010). Following you home from school: A critical review and synthesis of research on cyberbullying victimization. Computers in Human Behavior, 26, 277-287.

6 Charmaraman, L., Chan, B., Price, T., & Richer, A. (in press). “I have a Tumblr, which is sort of feminist-y, social justice-y”: Women of color cultivating virtual social capital to survive and thrive. Chapter accepted for forthcoming edited book, Women of color and social media multi-tasking: Blogs, timelines, feeds, and community

7 Charmaraman, L., Richer, A., & Chan, B. (2015, March). Do age and SES matter? A mixed-method exploration of social media use during good and bad times. Society for Research on Child Development, Philadelphia, PA, USA.

10 Smith, A. (2013). Why Pew Internet does not regularly report statistics for Asian-Americans and their technology use. Available at: www.pewinternet.org 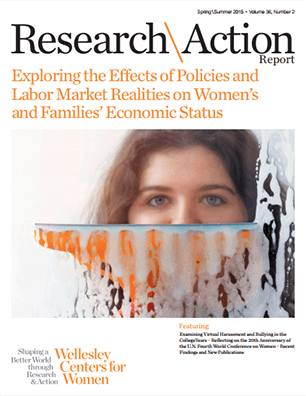