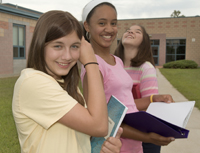 A few weeks ago we recognized Middle School Month--dedicated to re-emphasizing the importance of middle school programming and the unique developmental needs of adolescents. The National Institute on Out-of-School Time (NIOST) has worked with many concerned educators and policy makers over the years to ensure that middle school children have quality opportunities.

Eric Schwarz, CEO and founder of Citizen Schools, has been one of the most dynamic partners in his work. Recently, he announced plans to step down from his role as the organization that serves low-income, at-risk middle school students approaches its twentieth anniversary. Back in the mid 1990s, specialized afterschool programs for middle school youth were virtually unknown. But Eric had a vision that paved the way for a not only a new area of programming, but a body of knowledge and research that stressed the importance of giving low-income middle school students the skills and access to learning experiences most middle class students and their families took for granted.

Eric and I met at NIOST in 1994, shortly before he launched Citizen Schools with his partner Ned Rimer. I remember clearly our conversation about the special needs of middle school students, often overlooked by leaders in the field who were mostly focused on elementary-level children. At the time, we looked to the leadership of The Center for Early Adolescence at the University of North Carolina at Chapel Hill, one of the few research organizations that focused on young adolescents. Their guidance on the needs specific to this age group helped to shape the early work of those of us who recognized this gap in the developing field of afterschool. They included*:

In 2014, an industry of programs and services exist that focus on middle school youth during their out-of-school time and expanded learning day. NIOST, now in its thirty-fifth year, has expanded its repertoire of scholarship, research-based tools and training to include middle school- (and high school-) level programs and continues to focus its work on the changing needs and concerns of youth ages, 5-18 years. In part we can thank visionaries like Eric Schwarz for his leadership and advocacy. Eric, best of luck in your future endeavors!

Ellen Gannett, M.Ed. is director of the National Institute on Out-of-School Time at the Wellesley Centers for Women, Wellesley College.

Extremely interesting. Thank you for giving such an informative blog.

More posts from author
August 14, 2013 Is Grit Another Name for Resiliency?