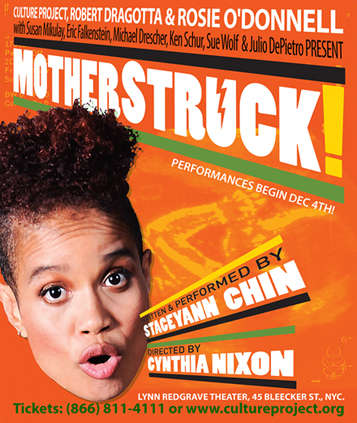 This article was originally published on Huffington Post and is posted with permission by the author.

International Planned Parenthood (IPPF) was founded because women were becoming pregnant when they didn't want to be and either having children they didn't want or resorting to unsafe abortion to terminate their pregnancies. We at Planned Parenthood in the USA and abroad have focused on providing safe and effective contraceptives to women who want to delay, limit, time and space their children, as well as safe abortion services. Along the way, my grandmother started a program to help women conceive, become pregnant and have the children they wanted. Fertility services are now offered at many IPPF clinics around the world.

I was reminded of this last night at the opening of a marvelous new play, MotherStruck!, written and performed by Staceyann Chin, a half-Jamaican, half­-Chinese, lesbian immigrant to Brooklyn, who decides to have a child. The play chronicles her poignant search for the right partner--both the romantic and the sperm­ donor varieties--her marriage to a gay man (who dies before his 30th birthday), and her subsequent assisted insemination by his younger brother. After a fraught pregnancy and difficult delivery, Staceyann experiences the trials of motherhood as a single mom and the difficulty of trying to eke out a living as a poet in Brooklyn.

The play reminded me that reproduction is not relegated only to heterosexual couples, and that childbirth and raising children are often not easy or without pain and trauma. This is why reproductive freedom is vital.

At the curtain call, Staceyann Chin's daughter, Suri, bounded onto the stage with flowers for her mother. The actor enveloped her and held her tight in her arms ­­ a gift to her mother, and to us.

Alex Sanger is Chair, International Planned Parenthood Council, and a former member of the Wellesley Centers for Women Council of Advisors.

No comments made yet. Be the first to submit a comment
Re-thinking Self-esteem
Professional Development is a Key to Quality