Commentary: How Women Can Succeed: An Alternative View

On an almost daily basis, I see, read, or hear a story about how women can improve their careers, advance in their pay levels, and avoid the stereotypes associated with women in the workforce. As a feminist, I am interested in these developments and am always rooting for women to pioneer new positions and achieve new forms of advancement.

In my heart, however, I worry about young, low-income, single mothers who are trying to support their children by holding a job—any job. The cost of high quality child care is out of reach for these women, making it almost impossible for them to balance their work life and family life. Luckily, there is within the welfare reform program known as TANF (Temporary Assistance for Needy Families), a provision for child care benefits for low-income women who work. It was considered necessary because TANF requirements impose intense pressure on these women to find a job.

But young mothers with very little money are demonized by society— perhaps more so if they are African American. All sorts of stereotypes and slurs are aimed at them: she has no self-discipline; she has more and more children in order to increase her welfare benefits; she neglects her children; she doesn’t want to work, but would rather sit around drinking beer and smoking. Further, part of the stereotype is that young mothers have as their main goal to defraud the welfare system. Many churches, rather than fighting this stereotype, collude with it and classify these young mothers as “the undeserving poor.”

At the federal level, “welfare reform” has imposed draconian provisions, such as: the “family cap” provision that if a woman has a child while she is on welfare, there will be no increase in benefits for the new child; a five-year lifetime limit on receiving welfare benefits (even if you have been looking for a job, but have been unable to find one in this economy); and denial of food stamps to legal, documented immigrants.

In response to the negative stereotyping of low-income mothers, state governments feel free to neglect these women and make it hard for them to receive benefits so they can work or attend school. State agencies set arbitrary rules that require inordinate effort on the part of the young mothers to hang onto their benefits. For instance, in Mississippi a mother must appear at the welfare office twice a year to be recertified for her child care subsidy. Few states require a face-to-face visit and fewer yet twice a year. The burden this creates may not be immediately obvious, but Mississippi is a largely rural state and visiting the welfare office often requires transportation and time off work—both real barriers for low-income rural mothers. If a recipient is at all late in visiting the office with her paperwork, her child is removed from day care and placed at the end of the waiting list to receive the child care subsidy. In 2009, the waiting list in Mississippi was over 6,000 children long.

Feminists have resisted the stereotyping of low-income young mothers for decades. Gwendolyn Mink, the daughter of the late Senator Patsy Mink (D-Hawaii), has been one of the leaders in this push-back, presenting insights into the real lives of low-income single mothers1. But the stereotype is firmly established in public opinion. As a result of pressure from most conservatives, libertarians, and even some liberals, the safety net on which these women depend has been steadily eroded. Of course, it is much worse if they are immigrants. Negative rhetoric about welfare for poor women now even maintains that welfare is bad for women and children, robbing them of “character” and “self-reliance.” As Gwendolyn Mink and many others have shown us, if there were scientific ways to measure strength, resourcefulness, and hard work, young mothers who make a life for their children out of almost nothing are some of the strongest, most resourceful, and hardworking women of all.

Moving Up From Poverty

Success for these young mothers and their children looks quite different from the success desired by professional women. Poor young mothers would like a decent life, with a certain amount of financial security, health care for them and especially for their children, and a safe environment. All these things are within our means as a country to provide, but their status as “undeserving” makes it difficult to muster the political will to provide the government assistance they need to make success possible.

Many researchers—both academic and activist—have studied how to lift women and children out of poverty. There is consensus that education is crucial, as is employment and safety. The key that turns the lock in the door to success in these areas is safe, affordable child care. Both education and employment are unattainable if a young mother of little means lacks access to good child care. Lacking a family member or an equivalent caretaker who can care for her child at low or no cost—so that she can go to work or school, she has to care for her small child or children herself. Now that we have health care reform, which serves women and men and definitely includes benefits for different economic classes, perhaps it is time to look at what else low-income women need, and that must include child care.

At one time, a system of universal child care, funded by the government, was on the political agenda. During the Lyndon Johnson Administration’s War on Poverty in the 1960s, there was wide agreement that child care was a “safety net” issue and an important part of the fight against poverty. Further, middle class white women were (re)entering the workforce, as the early rumblings of the women’s movement began to open possibilities for them. It seemed obvious that the lack of accessible, trustworthy child care was a problem for all families.

But the Vietnam War and other economic and foreign policy crises intervened and child care was abandoned as a pressing issue. When legislative attention returned to the issue of child care in the 1970s, the political right (then beginning its ascendance) mobilized a major campaign to defeat it. Led by Phyllis Schlafly of Eagle Forum, a rightwing women’s group, child care was represented as a government brainwashing program designed to replace the family as the primary caregiver of children with a government program that would instill socialist values in small children. Worse yet, it was characterized by the New Right during the Reagan Administration as a project of feminists. For the right, this was proof of its danger to American values, though the drive for child care was spurred simply by the needs of working women.

Though 2010 may be a politically propitious time to try again to make child care universally available, the lessons of the recent battle over health care do not bode well for its success. Child care, even more than health care, is a “family values” issue and the right would like nothing better than to mount another campaign to “just say no.”

But the public needs to understand that child care is not simply a service for the mother in her attempt to handle work and child-rearing. It also benefits her child or children. The overwhelming opinion in numerous academic studies— most notably the “High/Scope Educational Research Foundation’s Perry Preschool Study” that compares the lives of two groups of at-risk children, one group who had a highquality preschool program in the 1960s and another who had no preschool program—demonstrate the importance of quality child care to young children2. This study, one of the longest running (40+ years) and best known studies of the effects of preschool education, shows remarkable results when the researchers look at a wide range of factors in the lives of the two groups of study participants at the age of 40. The “preschool advantage” documented in this research includes higher lifetime earnings, greater employment stability, higher educational attainment, greater family stability, and dramatically reduced involvement with crime. Together these benefits result in a public benefit of almost $13 for every public dollar invested in the program.

A decades-long attack on child care itself, combined with the demonization of poor, single mothers, an alarmingly high unemployment rate of 9.7 percent (as opposed to 5.7 percent in 2001), and lessening access to low-cost higher education have severely affected the prospects of welfare recipients and other low-income single mothers to succeed. Even by modest standards of success, the current economic climate conspires to deny them a chance for a good job or access to education. Since unemployment hits men even harder than women in this recession, married men now often find themselves with an employed spouse, but a reduced income that can no longer support child care. They must look for a job and provide child care simultaneously.

Surely it is time for society to broaden the definition of success to include a fair playing field for all women. Not all women will make partner at the firm or enter government service at a high level, but if our society does not provide the basic services that allow young mothers to improve their lives and the lives of their children, we’ll never be able to claim that we’ve created a fair chance for all women to succeed. 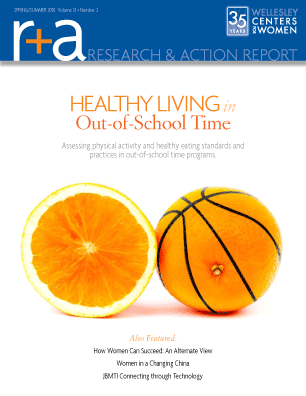