JBMTI faculty participate in an international conference in Hildesheim, Germany

Trafficking in human beings is the second most lucrative illegal activity worldwide. Human trafficking is an extreme example of social injustice perpetuated by dominant-subordinate attitudes that condone violence, resulting in significant suffering for individuals and harm to societies (Gunderson, 2012). It is a serious human rights violation and a low-risk, high-profit crime that is well hidden, underreported, under-prosecuted, and where trafficked persons experience extreme forms of physical and psychological violence and death.

The European Commission currently reports that an estimated 880,000 persons are trafficked yearly throughout the European Union. Persons are trafficked for a number of reasons: for hard labor, domestic services, begging, work in textile, fishing and other industries, and for sexual exploitation. Human trafficking remains a gendered phenomenon. In Europe, 76 percent of trafficked persons are sold for the purpose of sexual exploitation. Seventy-nine percent of these victims are women and girls (European Commission, 2012). Complicating the issue, current trends in Europe include an “increase in internal trafficking, an increase in trafficking via the Internet, and an increase in trafficking by persons that the victim knows and trusts” (Europol, 2010).

Although 93 percent of Europeans believe it is important to address human trafficking and to protect the needs of the societies’ most vulnerable, much needs to be done to raise awareness among communities and high level stakeholders. To advocate for those working in the field of human trafficking, HAWK University of Applied Sciences and Arts in Hildesheim, Germany welcomed Judith Jordan, Ph.D., Amy Banks, M.D., and Maureen Walker, Ph.D., faculty of the Jean Baker Miller Training Institute (JBMTI) at the Wellesley Centers for Women (WCW), along with international experts in the field of human trafficking, for a three-day conference in April 2012. The experts and advocates collaborated on the challenges and opportunities that face policy makers, the criminal justice system, and victim services to address human trafficking for the purpose of sexual exploitation. Additionally, students from Germany and the United States were engaged as active participants and co-collaborators during the conference.

Introducing a relational-cultural approach and promoting relational ethics demonstrated that people can and do make a difference. Lectures and workshops on topics such as ideas to improve international collaboration and multi-disciplinary responses, implementing comprehensive prevention strategies, and ways to better understand complex trauma were offered. Some of the main points made during the conference included societal responses to human trafficking. For example, Naile Tanis, director of KOK, the German activist-coordination group combating trafficking in women and violence against women in the process of migration, said that “although the expertise of counseling centers is valued and expected, mutual resulting support where adequate financial security for counseling centers that address sexual and work exploitation has not been realized.”

Ona Gustiene, director of Missing Person’s Family Support Centre, in Vilnius, Lithuania shared how “society has a prevailing opinion that a person who finds herself in trouble is largely to blame, and perhaps not worthy of compassion. Jane Nady Sigmon, Ph.D., senior advisor to the director of the U.S. State Department’s Office to Monitor and Combat Trafficking in Persons, reported the need to recognize that men and boys also fall victim to traffickers. She said: “A few years ago IOM Ukraine recognized that most of their services were female-centered. There was a lack of services tailored for men.” And recognizing the value of comprehensive services to treat trafficked victims, Banks, director of advanced training at JBMTI, assured participants of the unique ability of “the human nervous system to adapt and change in response to internal and external environmental pressures. ... Safe relationships have the power to heal traumatized individuals.” 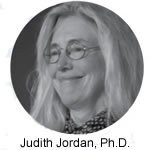 and debates surrounding human trafficking and prostitution. For example, Jordan, director of JBMTI, reminded the audience that “the sex industry is a “power-over” industry par excellence. It is not a “service” industry. It delivers people who have been rendered powerless to those who have the power of the buck.” Dr. cand. Gunilla Eckberg, an attorney from Glasgow, Scotland added: “Prostitution and trafficking in human beings for sexual purposes are harmful practices and intrinsically linked. Prostitution is incompatible with internationally accepted principles of human rights.”

Recognizing that human trafficking poses a security threat and a threat to the dignity of persons trafficked, challenges in judicial coordination to successfully prosecute perpetrators while protecting the integrity of victims were highlighted. Carsten Moritz, director of the Commission to Fight Human Trafficking, Federal Police, Wiesbaden, Germany, pointed out that “the official numbers of identified cases and prosecutions say little about the actual size or extent of this crime. Those affected (victims) are neither willing to file charges or testify in court.” Dr. cand. Bjarney Frióriksdóttir, senior advisor of the Task Force Against Trafficking in Human Beings, Council of the Baltic States, Stockholm, Sweden, reported how “the definition of human trafficking or specific elements of human trafficking differ between countries, so there is confusion of human trafficking with other phenomena such as smuggling or irregular migration.” Myria Vassiliado, Ph.D., the anti-trafficking coordinator for the European Commission, stressed the need for more research to help develop new policies and legislation. She reported: “We do not know enough about the demand side of human trafficking.” She encouraged the European States to “explore ways to reduce demand for sexual exploitation and to consider establishing a criminal offense for anyone who knowingly uses the services of victims of trafficking.”

Finally, understanding the importance of multidisciplinary action and the inevitable perils of philosophical and organizational divisions among stakeholders, Walker, director of program development at JBMTI, emphasized how collaboration needs to be about growth-fostering connection and staying together in the face of conflict. She shared:

“To work for justice is to take a stand for the safety and dignity of all persons. ... But it also includes the awareness that we have neither the power nor the right to unilaterally determine the outcome. ... To sustain us in that struggle we are often reminded to ‘keep our eyes on the prize’—and we have come to know that the prize itself is meaningless if we lose sight of each other.

“Jean Baker Miller summoned us to build communities based on mutuality and radical respect. She realized that ‘to have and to be able to maintain healthy and supportive relationships throughout life is central to growth and wellbeing (1986).’ Growth fostering connections are needed to address the complex challenges that human trafficking creates.”

The conference demonstrated that challenging and dismantling a domination-based culture, a culture that believes that persons can be bought, sold, and disposed of, will require sincere political and social will and adequate personal and financial resources. The conference also demonstrated that persons and institutions are collaborating to place a central focus on promoting social change by building, maintaining, and encouraging growth-fostering relationships—interpersonal, professional, and structural.

Gunderson, C. (2012). Human Trafficking: The Trafficking of Women in Northern Germany for the Purpose of Sexual Exploitation. A Systemic Overview of Community Based Responses and Challenges. Münster: LIT Verlag. 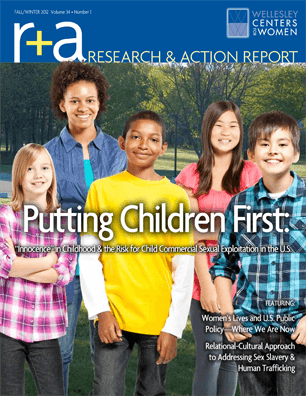