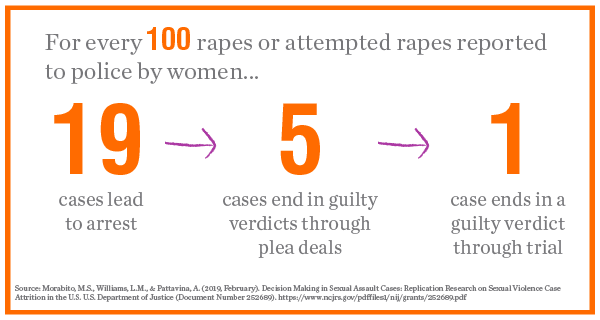 Researchers for a multi-jurisdiction study have found that when women chose to report a sexual assault to police, only 19 percent of cases ever led to an arrest, six percent of reports resulted in a guilty finding primarily as a result of a plea bargain, and less than two percent ever went to trial.

While half of all 2,887 sexual assault reports by females over age 12 in the study were cleared by police, many of these fell into the category of “cleared by exceptional means”—primarily because the victim was deemed to be uncooperative or because the police were aware that the prosecutor declined to prosecute. These clearances (about 30 percent of all reports) resulted in the cases not moving forward.

Of the 504 arrests of adult suspects in the study sample, prosecutors filed charges in 72 percent. Interviews with prosecutors revealed that they made decisions about declining to move forward with formal charges in anticipation of how they believed a jury would respond to the evidence in a case. They considered questions about victim character and reputation, corroboration or other evidence, and whether a victim would cooperate.

“The attrition of sexual assault cases from the criminal justice system has been a concern to victims, practitioners and researchers for the last 40 years,” says Co-principal Investigator Linda Williams, Ph.D., senior research scientist and director of the Justice and Gender-Based Violence Research Initiative at the Wellesley Centers for Women at Wellesley College. “The police and prosecutorial decisions are impacted by their assessments of case seriousness, strength of the evidence, including the level of victim ‘cooperation,’ and extra-legal factors such as questions about a victim’s credibility and her behavior prior to the rape.”

The study was, in part, a replication of earlier work conducted in Los Angeles County, and was designed to broaden and update understanding of the factors that predict attrition. In the 2019 report, Melissa S. Morabito, Ph.D., Williams, and April Pattavina, Ph.D., present their examination of justice system processing of cases reported to police between 2008 - 2010 in six jurisdictions across the U.S. The research team from Wellesley and the University of Massachusetts-Lowell found new evidence of factors impacting decision-making that were not noted in the prior work in California. Notably the researchers found new evidence that predictors of arrests were impacted by a victim’s mental health issues and any engagement in “risk taking” behavior, such as consuming alcohol or walking alone, as well as the victim’s level of resistance. Similar to earlier research, the report notes that an assessment of victim’s lack of cooperation was found to be a significant factor in predicting arrest.

Supported by funding from the U.S. Department of Justice, the researchers tracked reports of rape and attempted rape cases and documented the flow of reports through each stage. They analyzed detailed case records to understand the dynamics associated with attrition including victim, offender, and case characteristics, and conducted interviews and focus groups with key personnel, including police, prosecutors, and victim service providers. The authors note that there is still much that can be done to support victims and to assure that the role of the extra-legal factors that lead to high levels of case attrition are minimized.

“We need to understand the social biases that influence definitions of who the ideal victim is so that we can further educate law enforcement, judicial staff, advocates, and the public as potential jurors about the rights of all women, regardless of their situations,” says Williams. “And we need to address the barriers within the system—the confusing processes, long timelines, financial costs, transportation needs, and protection of victims—so that women are better able to navigate the system and more of these cases can be investigated thoroughly.”

The researchers recommend more research into the role of passive and active victim cooperation in case attrition; how cooperation is impacted by the victim’s experiences with the police and courts; the victim’s resources and ability to afford the cost of being a witness; and the level of resources devoted by the criminal justice system to assisting victims to cooperate with the investigation and prosecution.

Additionally, the team notes that based on the responses of victims in the case files, it will be important to look at how sentencing severity and the requirement for sex offenders to register impact the level of victim cooperation as well as the enthusiasm of the criminal justice actors to pursue the prosecution of some classes of perpetrators.

Beyond the considerations of improving police and prosecutor responses to rape cases, the report concludes that it is important to recognize that the problem of sexual violence case attrition goes well beyond remedies that simply promote better evidence collection.

“Sexual assault does not fit one stereotype, yet the system expects cases to fit the idea of “real rape”—a random attack of an undeserving woman by a stranger,” says Williams. “There is a need to educate the community about sexual assault so that there will be more support for all victims and more understanding of what rape really is.”

The Wellesley Centers for Women is the largest academic women- and gender-focused research-and-action organization in the U.S., with a legacy of groundbreaking research, theory, and action. We are an institute of Wellesley College and our social change work has influenced policy, practice, and programs since 1974. Our areas of work include: Education, Economic Security, Mental Health, Youth and Adolescent Development, and Gender-Based Violence. The Justice and Gender-Based Violence Research Initiative conducts and disseminates research designed to examine the causes and consequences of gender-based violence and the social, health and justice system responses to violent crime and victimization.