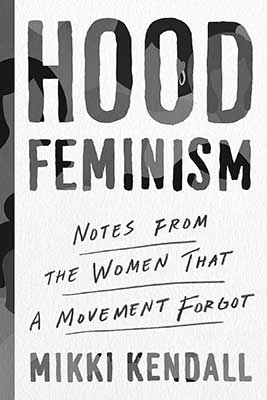 Hood Feminism: Notes from the Women that a Movement Forgot By Mikki Kendall
Reviewed by LaToya Council

In 1851, Sojourner Truth gave a speech at the Women’s Convention in Akron, Ohio, titled Ain’t I a Woman? In 2020, feminist popular scholar Mikki Kendall, like Black women before her, has posed that question to white women anew.

Kendall’s powerful and timely book, Hood Feminism, draws attention to many problems within feminism, asks many questions of white feminists, and provides some solutions. Kendall’s collection of essays is also at the center of a conversation regarding social media and its intersection with feminism and the Ivory Tower. Drawing on key essays, I will focus on the ways in which Kendall’s book brings attention to Black feminism’s ongoing battle with mainstream feminism. That is, will mainstream feminism place an effort on engaging in inclusive justice toward women who support and lean into its national rallying cries?

Kendall came to national attention in 2013 with her #SolidarityIsForWhiteWomen twitter hashtag questioning why white “digital” feminists supported a controversial male writer who admitted to targeting women of color. Kendall’s essay “Is Solidarity for White Women” further explores the question. Solidarity is when people with different identities and abilities come together to work towards the same goal. Kendall’s essay sheds light on how mainstream feminism falls short in practicing this. Drawing on media references to celebrities such as Lena Dunham, Katy Perry, and Patricia Arquette, Kendall shows how the arguments for representation of different kinds of bodies and equal pay are wrapped in white womanhood experiences. Mainstream feminism’s call for women to stand together, while continuously ignoring the experiences of marginalized women, sparks the question: who benefits from solidarity? Engaging solidarity is a critical step in standing against inequality—but not if solidarity only focuses on one experience at the expense of varied experiences.

As Kendall argues, incorporating intersectionality into feminism will expose the inequity embedded within mainstream feminism. Intersectional feminism can also be an avenue to do solidarity work that dismantles mainstream “oppression Olympics” (i.e., my grievances and problems are worse than yours, so my point of view trumps yours). Solidarity does not mean one approach; it means making room and advocating for people in ways that are best for them—allowing room for solidarity to manifest in multiple ways.

I have attended many mainstream feminist events where equal pay, environmental injustice, and work/family policies were focal. However, I have not sat at a meeting where food insecurity was part of the discussion. In her essay “Hunger,” Kendall invites readers to interrogate a topic that any intersectional feminist would be concerned with—food insecure households. Readers learn that food insecurity is an unequal pay issue, an environmental injustice issue, and a work/family policy issue. Because of this, how can mainstream feminism continue to ignore the passing of bipartisan welfare-to-work policies that cut assistance to low-income families? Or, ignore how living in a food desert with inadequate grocery stores and expired products is part of environmental injustice? Why isn’t rhetoric on increasing minimum wage central to discussing unequal pay policies and the gender wage gap? Not including food insecurity as part of the national rallying cries continues to overlook the needs of marginalized women in a movement that is supposed to be for all women. Kendall expresses this concern:

If we’re going to say that this is a movement that cares for all women, it has to be one that not only listens to all women but advocates for their basic needs to be met. You can’t be a feminist who ignores hunger.

Food insecurity is a feminist issue and deserves to be included in mainstream agenda items such as equal pay, environmental injustice, and work/ family policies.

Hood Feminism captures the essence of the problem with mainstream feminism in the essay “How to Write About Black Women.” In this essay, Kendall interrogates two problems: mainstream feminism’s misguided rhetoric about Black womanhood and the impact of respectability politics within communities. Many national conversations about Black women are driven by non-Black women. It is not often that voices of Black women are elevated above credentialed experts. Credentialed experts (mostly white) often express statistics emphasizing Black women’s lower marriage rates, higher rates of infertility, and higher maternal mortality rates to name a few. Although these credentialed experts are citing facts and studies, what is often missing from the reports are the parallels between these outcomes and systemic racism, sexism, and classism. If mainstream feminism is truly invested in a movement that centers all women, then these reports must be coupled with a deeper conversation of the interplay between multiple isms.

We were taught to fear the impact of rejection by whiteness, to embrace their standards without giving much thought to the impact on our own well-being or that of our communities. We have to break down this conditioning, have to ask ourselves why we’re more concerned with how we are received by white supremacist patriarchy than we are with protecting ourselves.

The alignment with middle-class respectability politics is, therefore, opposed to personal wellbeing. Because mainstream solidarity practices tend to lack an intersectional lens, communities of color must continue to take back our narratives and replace current forms of being with new ones— centering our experiences.

I am a work, family, and gender sociologist. I study Black families and examine how being Black shapes their experiences. In 2015, I attended a conference in Washington, D.C. on work, family, and motherhood. Each plenary panel featured only white academics as the “experts” on work/family policies. Women of color were represented in the audience. The recommendations and conclusions presented from the workingpapers excluded our voices and uplifted white middle-class women’s voices and experiences. Kendall’s essay “Parenting While Marginalized” captured my feelings at a conference that promoted expanding policies for all women but relied on one group of women to do so.

Parenting is hard. Parenting while marginalized is unimaginably so, but many marginalized women do it. Taking on the “mommy wars,” Kendall describes parenting in the hood as “survival parenting,” which includes women’s engagement in precarious work and activities to support their children. Vivid examples popped into my mind, such as leaving children home unattended because childcare is unavailable; “no show” work policies that penalize low-income mothers if they call out or do not appear; or insufficient transportation systems that make it hard for under-resourced mothers to travel to work. Again, if these mothers are late, many are penalized and at risk of losing access to welfare assistance. Alternatively, many middle-class Black mothers consistently worry about their children’s safety. Many fear their children will encounter police violence even in “safe, middle-class” neighborhoods. These forms of “parenting while marginalized” are overlooked in the “mommy wars,” which tends to pit women with hard-driving careers and nannies against “stay-at-home” mothers, and speaks to mainstream feminism’s alignment with white sisterhood. Like Kendall, I wonder, “how do you discuss overpolicing and discrimination as a feminist issue when women who fit the mainstream idea of feminism are most likely to be complicit in a particular form of oppression?”

Mikki Kendall provides multiple solutions to her framing of the problem of mainstream feminism and sparks a much-needed discussion between popular writers and the academy. Directly speaking to white women, she urges them to fight patriarchy and racism in their own communities. If mainstream feminists truly desire to create crossgroup solidarity and foster allies, then they must ask marginalized women how they can support and make room for their causes. In short, mainstream feminists must use their access to white privilege to become “accomplice feminists,” who “actively and directly challenge white supremacist people, policies, institutions, and cultural norms.” Until mainstream feminism can do this, Black feminists and other feminists of color may continue to be in constant battle with mainstream feminist politics.

Kendall’s book also sparks a conversation regarding social media and the Ivory Tower, where the ideas expressed in the collection of essays are often discussed. I wonder, after reading this book, how in sync everyday conversations regarding social problems and the Ivory Tower are. And does this relationship matter? Throughout Hood Feminism: Notes from the Women that a Movement Forgot, I recognized key conversations that Black women academics are having in the academy. For example, #CiteBlackWomen was created by Black women academics to acknowledge the work we do in the academy on the same issues presented by Kendall. Does this conversation need to be included within the popular press world and its conversations on “forgotten women?” Kendall’s book is a great place to begin that conversation— moving forward best practices for the sake of all women.

It is unfortunate that in 2020 minority women, lesbian women, trans women, and differently abled women must continue to ask to be included in mainstream feminism. Feminism was founded to promote equality and equity with only one group in mind—white women. Equity is a pesky problem because it requires one group to shift certain privileges to promote access for all members of an organization. If mainstream feminism is unwilling to use white privilege to dismantle white supremacy, then minority feminists must not let the term intersectional modify feminism. Is solidarity for white women? Ask yourself the question.

LaToya Council is the author of IntersectionAllies: We Make Room for All. A social justice activist and an academic scholar, she is currently working on her dissertation Her Work, His Work: Time and Self-Care in Black Middle-Class Couples at the University of Southern California.