Recommended Reading for the Next President

The March April 2016 issue of Women’s Review of Books (WRB) was quite different from the publication’s usual offering. Amy Hoffman, M.F.A., editor-in-chief, included a special section featuring WRB writers and some other favorite feminists sharing recommendations of what they thought the next U.S. president should be reading, in preparation for taking office. Additionally, Cartoon Editor Jennifer Camper illustrated the special section and added brevity with her artwork. The list that resulted is fascinating—and could probably keep even the most well-read person productively busy for the entire next presidential term. But it wasn’t quite what Hoffman expected.

The first person to respond to Hoffman’s query was the poet Alicia Ostriker. She did not recommend poetry—although others did. Her priority was for the next President to read the most recent edition of Our Bodies, Ourselves—and she specified, “cover to cover.”

“This is the book that more than any other begins to make clear what life, liberty, and the pursuit of happiness equally for women and men should mean,” she wrote. Ostriker was not the only respondent who prioritized women’s bodily integrity and agency. Katie Grover, a former member of WCW’s Council of Advisors and former president of the Ms. Foundation, recommends that the next president read From Outrage to Courage: Women Taking Action for Health and Justice, by Anne Firth Murray, founder of the Global Fund for Women.

Other health-based recommendations took a different direction. Many of the respondents were concerned not only about the health (in all senses) of women—but of the mental, emotional, and spiritual health of the president her- or himself. Thus, womanist scholar AnaLouise Keating suggested The Miracle of Mindfulness: An Introduction to the Practice of Meditation, by Thich Nhat Hanh; WCW Council of Advisors member Courtney Martin recommended The Art of the Common Place, by Wendell Berry; WCW Executive Director Layli Maparyan recommended The Yoga Sutras of Patanjali; When Things Fall Apart, by Pema Chodron; Peace Is Every Step, by Thich Nhat Hanh; and Your Invisible Power, by Genevieve Behrend.

Several recommenders wanted the president to take a deep look at U.S. international policy and its underpinnings. Beverly Guy-Sheftall, Spelman College’s Women’s Research & Resource Center director, focused her recommendations on the Middle East, in particular, “because of the absence of attention to Palestine from the vantage point of Palestinians,” she explained. Jennifer Camper, too, wanted more focus on Palestinian perspectives, recommending People Like Us: Misrepresenting the Middle East, by Joris Luyendijk. Other books on international relations on the recommenders’ lists were Half the Sky, by Nicholas Kristof and Sheryl WuDunn; Girls Like Us: Fighting for a World Where Girls Are Not for Sale, by Rachel Lloyd; Dead Aid: Why Aid Is Not Working and How There is a Better Way for Africa, by Dambisa Moyo; and Age of Ambition: Chasing Fortune, Truth, and Faith in the New China, by Evan Osnos.

Another major concern of the recommenders was the politics and perspectives of women of color—African American women in particular. Sister Outsider, by Audre Lorde, and Citizen, by Claudia Rankine—both cross-genre works by poets—appeared on more than one list. The president was also advised to read the classic anthology This Bridge Called My Back: Writings by Radical Women of Color, edited by Cherrie Moraga and Gloria Anzaldua, as well as other works by Anzaldua, including Borderlands/La Frontera.

Several works of literature, poetry, and photography/art were also recommended in this special feature. Listen to Hoffman’s full account of the recommended readings and download the special section: www.wcwonline.org/Recommendations 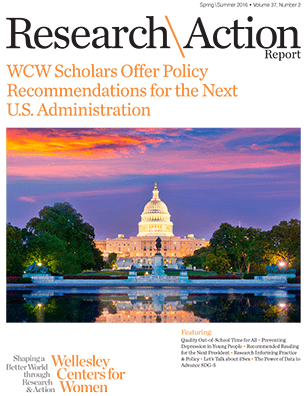