Gender Equality Gets a Boost from an Unexpected Corner

One hot August afternoon in 1999, after the day’s cooking and cleaning were done, I asked some of the young women of Miraflores, a Dominican village I studied for my dissertation, to talk with me about how their lives had changed since so many of their friends and neighbors began migrating to the United States. Mirafloreños have been moving to Boston since the early 1970s, settling in and around the neighborhoods of Dorchester, Roxbury, and Jamaica Plain. By the mid-1990s, nearly three-quarters of its households had family members living in Massachusetts. Close to 60 percent received some monthly income support from migrants. It seemed to me that the exchanges of people, money, goods, and what I call social remittances or ideas, practices, social capital, and identities that circulate regularly between people who move and people who stay behind had dramatically transformed aspects of daily life. In particular, I wanted to know how women’s lives had changed.

“What do you imagine your future to be like?” I asked the six young women, ranging in age from 18 to 25, who accepted my invitation. “Well,” said Mindris, a confident, thoughtful 19-year-old who seemed much more worldly than her eighth-grade education might suggest. “I know I don’t want to marry anyone who hasn’t lived in the United States,” she answered. Though she had never been to Boston, she had heard enough stories and watched enough couples when they came back to visit to get the sense that something different happened between men and women when they lived abroad. “They seem to work more like a team,” she told us. “Because the husband and wife both work, the husband has to help out more with the housework and the children. Since they both earn money, they both make the decisions. I don’t want to marry a man that doesn’t expect his wife to be his equal partner.”

A conversation a few weeks later with Leonardo, a 45-year-old return migrant added evidence to Mindris’ argument. “Yes,” he said, “things do change in the United States. I helped out with the housework and the shopping. I made dinner if I got home before my wife. It’s too cold to go out much in the winter, so men stay home more. And these things changed how we act here. I still help out more but only when my friends can’t see me. I do things inside the house, like the dishes or the sweeping, but you’ll never catch me hanging out the laundry.”

I believe two things are at work. First, migration is no longer a linear, progressive journey from one membership card to another but simultaneous processes of incorporation into a new land and continued involvement in the place that you come from. More and more, migrants renovate homes, invest in businesses, and support political candidates back home at the same time that they buy homes, vote, and join the PTA here. Second, in addition to the money migrants send, hailed as the latest development panacea by foundation officers and world bankers alike, they send home social remittances which also dramatically transform social life. Long-standing assumptions about democracy, right and wrong, and gender including whom to marry, how to bring up children, and what women’s proper public role should be are up for grabs. Even women who never move get the sense that something different is possible. And even though the Dominican economy still offers them limited opportunities, they aspire to a different kind of dynamic. They want to make their own decisions and have their voices heard. They ask more of their husbands and of themselves.

The Dominican Republic is not unique. And it’s not just gender dynamics in families that are changing. Migrant women also tell their sisters and mothers back home about their religious and political activities. Most women in Pakistan, for example, hardly ever enter a mosque to pray. In Boston, however, the mosque is a central focus of the Pakistani community. It’s not just a place to worship but a cultural and educational center as well. To get legal, tax-deductible status, mosques have to establish Boards of Directors. They need administrators and teachers to run their religious schools. In Boston, women not only pray alongside men, they also run the mosque alongside them. These changes don’t just broaden women’s roles in Boston, they also challenge the status quo in Pakistan. When I traveled to Pakistan in 2002, to talk with some of the family members and friends of the immigrants I met in Massachusetts, I asked women if they knew what their mothers and sisters were doing at the mosque in the United States and what they thought about it. Most told me they had heard about what was going on and that they knew that women were praying with men. While some remained uninterested, saying it’s their special privilege to pray at home, others were captivated by the idea and tried to create new arenas where they could also study and pray together.

Likewise, women from the city of Governador Valadares in Brazil tend to be more active in the labor force in Boston than in Brazil. As more and more women start their own house-cleaning and office-cleaning companies, they’ve also assumed more prominent roles in the business life of the community. One jewelry store owner, for instance, created a branch of the Brazilian Business Network. Others were active in the community’s social and cultural organizations. As in the Pakistani case, news of their activities traveled back and inspired non-migrant women to become leaders in their churches or neighborhood organizations.

Regional and national dynamics influence these local changes. In Peru, for example, the social remittances that change village life go hand in hand with changes introduced by the state to improve women’s status. Many women know about International Women’s Day. An elite group of NGO directors, who have studied and trained abroad, know about Convention for the Elimination of Discrimination Against Women (CEDAW) and translate these transnational narratives to fit with local, everyday realities.

That’s not to say that everything migrants observe and send back is positive. Contrary to what Mindris believes, there are plenty of good men in Miraflores who were frustrated when they were automatically excluded from the potential partner pool. There were also plenty of women who couldn’t wait to get back to Miraflores so their husbands could resume supporting them. Young people hear about migrants who work hard and honestly to succeed, and others who advance by beating the system. Both strategies have their fans. There are the obvious fears, among people back home, that the flow of ideas from America devalues family, emphasizes materialism, and encourages moral and sexual permissiveness. And the United States is far from a perfect model—witness Hurricane Katrina, the flawed presidential election in 2000, or police brutality in Los Angeles.

But when we think about empowering women, and alleviating underdevelopment in general, we shouldn’t overlook the help we’re getting from this unexpected corner. Ideas and values matter. Immigrants not only bring new thinking and ways of doing things to this country, they also send ideas and practices back, enriching and improving their home countries. The importance of the new possibilities these open up, the slight shift in basic assumptions they bring about, and the new tools they add to ordinary women’s cultural toolkits should not be overlooked.

Peggy Levitt, Ph.D. is chair and associate professor in the Department of Sociology at Wellesley College and a member of the Wellesley Centers for Women Board of Overseers. Levitt is author of God Needs No Passport: Immigrants and the Changing American Religious Landscape, published last June by The New Press. She is co-director of the Transnational Studies Initiative and associate at The Weatherhead Center for International Affairs and The Hauser Center for Nonprofit Organizations, Harvard University. 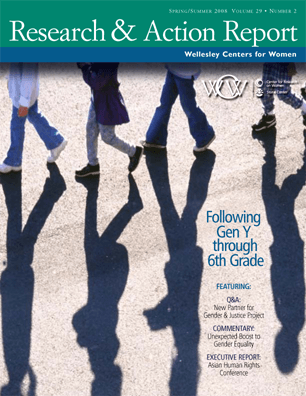