The Jean Baker Miller Training Institute (JBMTI) at the Wellesley Centers for Women (WCW) is celebrating its tenth anniversary this year. The Institute is dedicated to the exploration of new models of human strength based on empathy, compassion, and contribution to social justice. Working at both the micro and macro levels, the Institute supports individual change while working for social transformation. The 2005 anniversary year brings deep gratitude for all who have joined in the work, a sense of pride in the accomplishments, and a daunting awareness of what still needs to be done.

The Institute was created in 1995 as the institutional home for what had been known since 1981 as the Stone Center Theory Group. This group—originally Jean Baker Miller, Judith V. Jordan, Irene Stiver, and Janet Surrey, joined for several of the early years by Alexandra Kaplan—began meeting in 1978 shortly after the publication of Jean Baker Miller’s ground-breaking bestseller, Toward a New Psychology of Women. The theory group became affiliated with Wellesley College when Jean Baker Miller was named the first director of the newly created Stone Center.1 Shortly thereafter began the very successful colloquium series and publication of the “works in progress.”

The theory group and the work have evolved over the years through theoretical, clinical, and research projects. Analysis of power imbalances, of arginalization, and of the importance of sociopolitical con text has been the central focus in the last several years, as exemplified in the work of Maureen Walker, Wendy Rosen, Yvonne Jenkins, Elizabeth Sparks, Natalie Eldridge, and others. Most recently, Amy Banks, director of advanced training, has begun integrating the neurobiology of connection with Relational-Cultural Theory (RCT), the
approach to human growth that serves as the foundation of all work at the JBMTI.

Relational-Cultural Theory
RCT has been influential in moving psychology from a “separate self” paradigm to one that recognizes the centrality of relationships to human growth and well-being. The core principles of RCT are:

Impact through Research and Programs
The JBMTI sponsors training programs for clinicians, community members, and those developing social policy and engaged in organizational change. Each year an introductory Fall Intensive Training Institute is held. An annual Summer Advanced Training Institute is designed for clinicians who seek to deepen their understanding and practice of RCT.

Over the years, more than 2200 clinicians, students, educators, social policy workers, and business people have attended the institutes, and more than 30,000 individuals receive our mailings. These people live in all 50 of the United States and in 41 countries. The JBMTI faculty members have traveled the globe, conducting workshops and institutes, directly reaching over 32,000 people. More than 100 “works in progress” and 16 books, including six books describing and defining the founding concepts and continued developments in RCT, and numerous journal articles and book chapters have been published. The work is represented in the curricula of many graduate programs and anthologies of clinical practice, and the Institute has been approved by the American Psychological Association as an official sponsor of continuing education. The most recent enterprise is the development of home study programs.

The Irene Stiver Dissertation Award was initiated in 2004 by the Research Network to encourage graduate students to use RCT in their studies. The death of Irene Stiver was a terrible loss during this period of ongoing elaboration of RCT. But Irene’s spirit remains and her investment in training is being carried forward through the dissertation award as well as the Irene Stiver Scholarship Fund, which has allowed over 100 people to attend trainings.

A postdoctoral position, offered jointly by the JBMTI and the Stone Center Counseling Service, has trained ten postdoctoral fellows over the years. In addition to their clinical work with students, fellows have contributed research papers on important topics such as eating disorders and sexual orientation.

The JBMTI has expanded into the world of large organizations through the Working Connections Project. This project applies RCT principles to enhance organizational dynamics, looking in particular at the importance of mutual growth, “fluid expertise,” relational intelligence, and new models of leadership that support creative and effective workplace practices. “Relational Leadership . . . Not Business as Usual,” this year’s Spring Institute hosted by the Working Connections Project, sold out a month in advance. Working Connections Co-director Joyce Fletcher’s Disappearing Acts: Gender, Power, and Relational Practice at Work, published in 2000, which demonstrated that relational skills practiced by women in the workplace are ignored or viewed as inappropriate by organizations that claim to need such behavior, has been widely influential. In 1991, an invitational confer- ence, based in large part on RCT approaches to understanding organizations, was held at the University of Michigan. Professors at several business schools, including the University of Michigan, the Massachusetts Institute of Technology, and Simmons College, have used RCT in their courses. An entire course on RCT and Organizations was created at the Graduate School of Business at the University of British Columbia. A manual for applying RCT to organizations is currently in preparation at the JBMTI, as is a tool for measuring the relational health of an organization. The manual will be along the lines of Judith V. Jordan and Cate Dooley’s Relational Practice in Action, a bestseller at the WCW Publications Office. The measuring tool will be modeled after Belle Liang, et al’s Relational Health Indices, which evaluates the quality of interpersonal and community relationships. Through its Research Network, the JBMTI maintains regular contact with nearly 40 scholars and investigators who are using RCT in their research. At the annual Summer Institute, researchers are invited to submit proposals for presentations during the Research Forum. The following is a sample of project topics presented at recent Research Forums.

Broadening the Impact
Supported by a diverse group of scholars, the work of the JBMTI is increasingly moving into the world to promote social change. For example, RCT is at the heart of Karen Samuel’s development of a curriculum to teach physicians about eating disorders, and On the Rise, a Cambridge-based project working with women in crisis or homelessness, uses RCT in its program. “Our goal,” says On the Rise Executive Director Katya Fels, “is to form flexible, evolving, growth-fostering relationships with women. These relationships are a point of continuous connection amid a system of disconnected ‘power over’ services in the community.”

Through the JBMTI, Jean Baker Miller’s work has blossomed over the years into an important movement that has been pivotal for the personal growth of many women and for the field of psychology as a whole. A forth-coming book by Pulitzer Prize-winning reporter Chris Robb will feature the work of the JBMTI, Carol Gilligan, and Judith Herman. The book is entitled This Changes Everything, an apt title for
so much of WCW’s work.

On the international front, Meenakshi Chabra is applying RCT to a project that brings together Indian and Pakistani high school students to breach the deep divisions that were created by the partition of India, and Linda Hartling, associate director of the JBMTI, has recently been appointed to the board of directors of Human Dignity and
Humiliation Studies, an international network of scholars and practitioners committed to reducing disrespect and humiliation worldwide.

The JBMTI Practitioner Program, under the direction of Amy Banks, provides an advanced, two-year program for clinicians and others interested in social change. Practitioners have an opportunity todeepen their understanding and use of RCT, develop clinical skills, and complete a project using RCT as they work closely with faculty from the Institute. Applicants have come from around the world and from many different work settings. 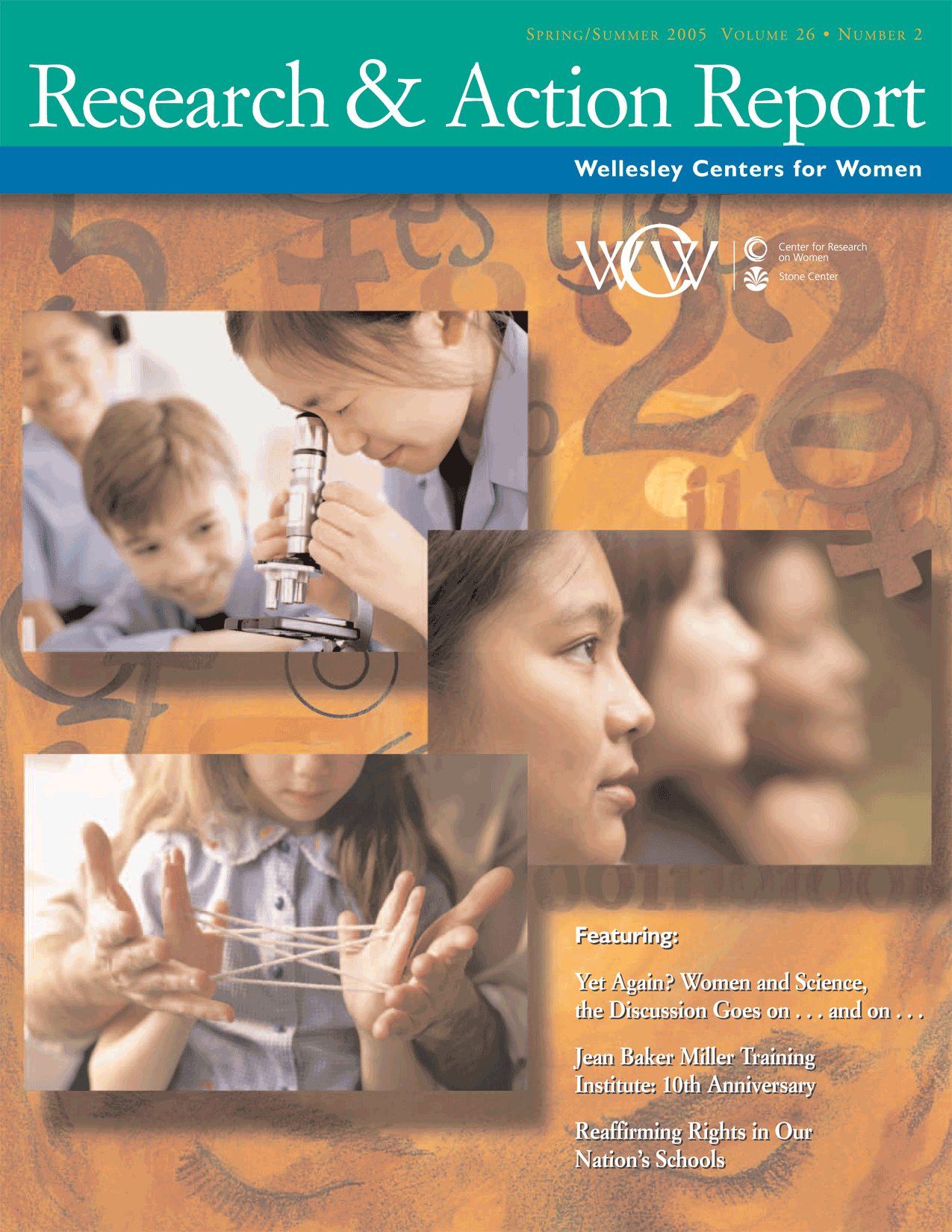