The aging of the baby-boom generation is producing profound changes in many sectors of society, the labor force being no exception. According to federal census data, there are currently about 22 million adults aged 55+ in the workplace, and that number represents only the oldest baby boomers.

By the year 2015, when the youngest boomers will have entered their 50s, that number will jump to 31.9 million, and these “older workers” will account for 20% of the labor force. According to Anne Noonan, research scientist at the Center for Research on Women, although the “graying” of the U.S. workforce may be common knowledge, social scientists know very little about how this demographic shift is impacting individual work lives—or, simply put, what it’s like to be an older worker.

As Noonan sees it, there are a few reasons why our knowledge about older workers has yet to catch up with demographic realities. “First,” she says, “most research on older workers has focused on their retirement decision making or their attitudes about retirement. There’s no doubt that retirement is a major concern for many older workers, but how can we fully understand what work means to people after age 55 if we ask them only about their plans to leave work? As a developmental psychologist, I know that we limit ourselves if we see older workers only as preretirees, just as we would if we viewed the children we study merely as pre-adults.”

Another limitation is the outdated assumptions that exist about what it means to be an older worker. “A few decades ago, people’s career trajectories and work lives were pretty linear and predictable,” says Noonan. “They launched careers or lines of work in early adulthood, they kept them going in middle adulthood, and they retired from them in later adulthood. Now we know that adults can go through these steps several times over the course of their work lives, but we don’t yet have the research base to understand what that means.” Similarly, it’s common to think of the typical older worker as someone who is slowing down as retirement approaches, who is motivated to mentor younger colleagues, or who is less interested in issues such as salary and advancement. But, Noonan asks, “What about older adults who work in industries where younger people may hold the knowledge, such as information technology? What about women who stayed home to raise children and are now facing pension insecurity? What about those experiencing financial strain or job instability?”

With these questions in mind, Noonan secured funding from the National Institute on Aging, one of the National Institutes of Health, to conduct an exploratory study of older-adult work lives. Especially interested in studying those in less stable later-life employment situations, she collaborated with an urban employment-services agency to recruit 45 women and men aged 55+ for in-depth, in-person interviews. Many of the research participants had experienced recent unemployment, and most had held several different careers or had been employed in several lines of work during their work lives. Their average age was 62. “What was immediately apparent from listening to these participants,” says Noonan, “is how actively engaged they were in constructing their work lives and their identities as workers.” For example, some participants were actively building part-time work situations to accommodate health concerns, family demands, or desire for volunteer work. Others were seeking specific types of work environments and conditions that they deemed a better fit with later-life development. Still others were attempting to “get back on track” professionally after various kinds of disruptions, were trying to find work that would pay them to pursue their passions, or were just beginning work lives that they considered meaningful.

In addition to the breadth of these older workers’ experiences, there was also a great deal of depth.“ We have always known that work serves several purposes in people’s lives,” says Noonan. “It can provide financial stability, a way to structure time, a sense of identity, access to social interaction, and the opportunity to accomplish something. But this study provides a more nuanced look at some of these categories, especially identity and social interaction.” For example, it’s clear from the data that paid employment in later life can do more than maintain a work identity that was formed earlier in life. Work can provide opportunities to confirm one’s identity after breaks in relationships, to return to one’s true identity, or to significantly redefine oneself. Further, several older workers in the study talked about the fundamental importance of relationships and connection in the workplace, and they described the enormous impact of “relational disruptions” at work on their identity, their selfworth, and their place in the world of work.

“These findings would not surprise anyone familiar with the relational-cultural theory and the work of scholars at the Stone Center,” says Noonan, “who have long talked about the critical importance of relationships in women’s lives.” But this study highlights the influence of work relationships, positive and negative, for men as well as for women. Also in line with relational-cultural theory is the finding that although receiving emotional support from co-workers is a valued part of work, this is just one of the positive aspects of work relationships. “The participants also spoke movingly about being recognized for their work, feeling a sense of belonging and camaraderie, coming to value workplace connection in contrast to personal histories of disconnection, and being influenced by and influencing the lives of others. Much adult development research looks only at emotional support when it studies relationships,” says Noonan,“and these data show convincingly that we need to look at multiple aspects of social relations.”

Men and women in this study were more alike than different in their beliefs about the importance of work relationships. However, Noonan did find that these beliefs differed according to other aspects of participants’ “social location.” For example, workers with lower educational levels, those who were members of minority groups, and those who reported lower socioeconomic status tended to hold varying beliefs about the value of being attuned to others at work, much of which was attributable to experience with discrimination or other negative encounters. “This finding confirms that different subgroups of workers have different work experiences,” says Noonan, “but what’s more interesting is how profound these differences were, in particular for those who perceived social-class differences between themselves and their co-workers.” In fact, a few of the respondents told their entire work-life histories using a social-class framework, and they placed special emphasis on how these differences had affected their entry into the world of work. “Remember,” says Noonan, “these people had begun paid employment some 40 or 50 years ago. The enduring nature of the impact of these differences was striking to me, as was the influence these differences had on the participants’ very first relationships with co-workers and supervisors.”

Noonan was further surprised to see how little psychological research had been conducted on the association between social class and work entry, especially with regard to how social class might influence relationships in the workplace. So Noonan sought and was awarded funding from the Robert S. and Grace W. Stone Primary Prevention Initiatives to conduct another in-depth interview study, this time with urban high school students involved in paid employment. Known by the acronym POWER (Perceptions of Work Environments and Relationships), the study’s main purpose is to examine if and how these students’ perceptions of social-class differences impact their relationships with their supervisors or other adult co-workers. “We know that people from different socioeconomic backgrounds have different work experiences,” explains Noonan, “and we know something about how racial and gender differences can impact young people’s relationships with mentors. But this is the first study that takes an indepth, integrated look at social class, work entry, and relationships with important adults.”

Noonan has just begun analyzing the data she collected over the past year, but some interesting patterns are already beginning to emerge. Although the students report a fair amount of distance between their families’ economic circumstances and what they perceive their supervisors’ and adult coworkers’ circumstances to be, they do not—when asked directly—report that these differences have much to do with their relationships with these adults. “They are much more likely,” says Noonan,“ to point to differences in age or personality.” However, later in the interview, when students respond to in-depth questions about their relationships with adult co-workers, the markers of social class—education, available income, occupational prestige—do emerge. “It’s not uncommon for a student to tell me something like ‘where you come from won’t hold you back’ or ‘it’s what’s inside that counts.’ But even when they embrace these individualistic explanations for success, many of them do have an awareness that social class is operating in the background—and sometimes the foreground—of work experiences and work relationships.”

Noonan admits that studying workers at opposite ends of the work-life span makes for a somewhat atypical research program, but maintains that doing so raises questions that would not emerge with a more narrow focus on age groups. She is fascinated by how differently the younger and older workers describe the impact of perceived class differences on their work experiences and work relationships. “So is class identity a developmental phenomenon, something that evolves over time? Is it easier for people to talk retrospectively about how differences impact them than it is to talk about differences in the here and now? Do years of experience give people a greater awareness of how social forces affect them individually? The best way to answer these questions is to follow people over time, at several points in their work lives.” Noonan strongly believes that in-depth, qualitative interviewing is a powerful way to test long-held assumptions about people and their work. “It’s not a radical notion that a good way to understand people’s lives is to ask them about their lives,” she says. “But it’s clear that we’re not doing it enough, especially when it comes to work.” 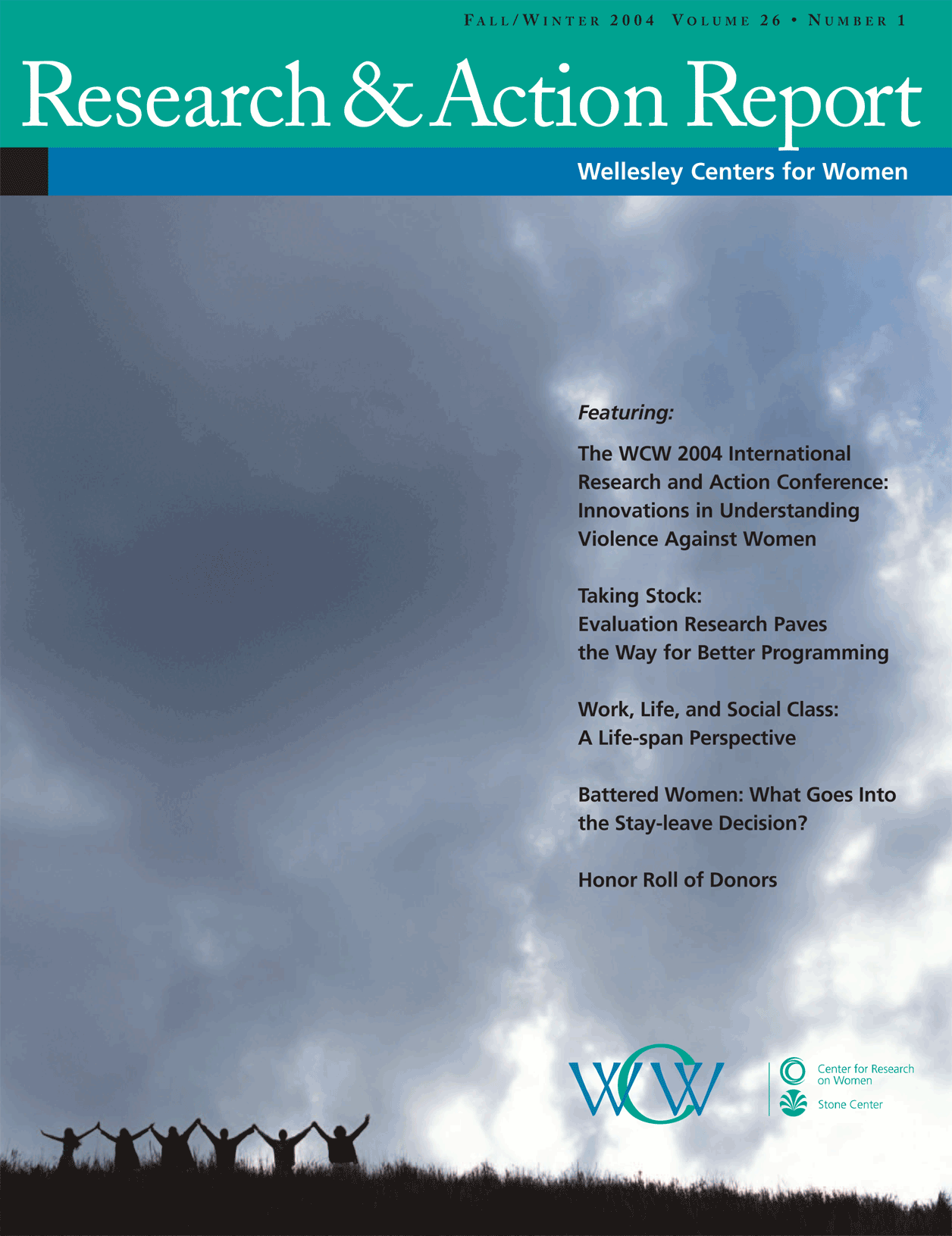