Since 1983, the Women’s Review of Books has been the premier feminist book review and remains proudly a print publication. WRB reviews scholarship as well as fiction, graphic novels, poetry, and memoir usually (but not always) by women. We strive to review a diverse array of books in many fields, genres, and styles for each issue. Edited by feminist author Jennifer Baumgardner and published by the Wellesley Centers for Women in partnership with Old City Publishing, WRB provides a unique perspective on today’s literary world.

Subscribers to Women's Review of Books can read the issue online.

Previous issues of Women's Review of Books can be purchased as digital downloads. 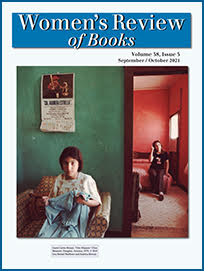 Unsettling Not a Nation of Immigrants: Settler Colonialism, White Supremacy, and a History of Erasure and Exclusion By Roxanne Dunbar Ortiz
Reviewed by Andrew Needham

Ace Freely Ace: What Asexuality Reveals About Desire, Society, and the Meaning of Sex By Angela Chen
Reviewed by Ariel Kim

We (By Which I Mean I) Everything I Have Is Yours: A Marriage By Eleanor Henderson
Reviewed by Anna Godbersen

On the Move The Barbizon: The Hotel That Set Women Free By Paulina Bren; Come Fly the World: The Jet-Age Story of the Women of Pan Am By Julia Cooke
Reviewed by Hannah Joyner

The Artist's Why Make Your Art No Matter What: Moving Beyond Creative Hurdles By Beth Pickens
Reviewed by Kait Heacock

Tough Love Between Certain Death and a Possible Future: Queer Writing on Growing Up with the AIDS Crisis Edited by Mattilda Bernstein Sycamore
Reviewed by Eleanor J. Bader

Ireland, Europe, The World, The Universe Beautiful World, Where Are You By Sally Rooney
Reviewed by Cynthia Payne

Body Product I Live a Life Like Yours By Jan Grue; translated from the Norwegian by B. L. Crook
Reviewed by Laurie Stone