Making a Difference with Research

Can research make a difference? Some view research as a useless ivory tower activity of little meaning. Others expect that research will be so compelling that policy makers will immediately adopt the recommendations. Still others find the plethora of research confusing and contradictory. If research is to make a difference, four conditions must be met. Effective research must 1) be guided by explicit paradigms, 2) be informed by experience and practice, 3) use methods appropriate to the goals, and 4) get into the right hands, the right forums, the right boardrooms.

First, research must be guided by explicit paradigms or models of understanding. Research that is not based on existing knowledge and theories risks repeating what we already know, or generating confusing results. In addition, research must also be guided by values. While some argue that research ought to be value-neutral, it is not; one’s values are reflected in the choice of topic to explore, the questions one asks and the methods one uses to answer the questions. Consider the history of research on women and employment. Earlier in the 20th century, such research asked how women’s employment harmed children. By the 1960s and 1970s, some research began to ask how women’s employment benefited women. In the 21st century, research on women and work is undertaken from a variety of perspectives, all ostensibly addressing the same topic, but asking different questions that reflect the values and paradigms of the various researchers. How do women lead? What unique contributions do women bring to corporate boards? What resources are needed to move women forward?

If research is to be useful, it is important that researchers make clear their particular perspectives and the values that guide the choice of topics and questions. At the Wellesley Centers for Women (WCW), we make our values explicit, placing women’s voices at the center of our inquiry, and asking questions that reflect women’s varied concerns.

Second, at WCW we believe that to make a difference, research must be informed by experience and practice—ours as well as others. Our research usually begins by listening—listening to the voices of individuals whose experiences are relevant to the topic of study, and to practitioners’ knowledge about the topic. When research is grounded in lived experience, it is more likely to ask the questions that will generate knowledge that can make a difference in real-life terms.

Third, research must use methods that are appropriate to the goals. If we want to understand the processes by which individuals adapt to specific circumstances, we need methods that allow us to hear and/or observe at the micro-level—how do individuals perceive their situation, how do they think about it, what do they do, what happens next, how do they view the consequences of their actions? On the other hand, if we want to understand how prevalent a particular experience is in a large population, we need to use methods that allow us to collect information from a group of people representative of the larger population, and to ask questions that effectively capture prevalence. At WCW, we use a range of methods—and any one study may use multiple methods—to ensure that our research will provide results that address the original questions asked.

Research has an impact on knowledge by advancing science and theory. While scientific advances can be dramatic as new studies break new ground, much of science advances more slowly as studies confirm existing knowledge by accumulating consistent results as well as by testing specific theories under various conditions. Research commonly makes a difference to science and theory through publication in scientific journals and scholarly books, as well as through presentations at scientific conferences.

Research in the Media

Another way in which research can make a difference is through the mass media. News coverage and popular press publications can help disseminate research to a wider audience and can contribute to changing ideas and stereotypes. How Schools Shortchange Girls, for example, a report that was prepared by Susan McGee Bailey and her colleagues under a contract from the American Association of University Women Educational Foundation in 1992, generated media stories in major urban newspapers including the New York Times, Washington Post, Boston Globe. The report also received significant coverage in educational publications and on national and local broadcast news. The topics, data, and themes detailed in this report remain in the news today, 15 years later.

Research can have immediate influence when it is used by practitioners to inform their practice. For example, Nan Stein’s research on sexual harassment in the schools, which began in the late 1970s and continues today, led to the development of three curricula in the 1990s for use by teachers across the country. Tens of thousands of copies of these curricula have been sold. Nancy Marshall led a study of gender bias in the Massachusetts courts in 1989, working with a Commission of lawyers, judges, and other members of the court system. That research was used to develop a Court Handbook on treatment of participants in court proceedings; the Handbook is still in use.

Finally, research can make a difference when it is used by policymakers and advocates to make changes. For example, research by the School Age Child Care Project—now the National Institute on Out of School Time (NIOST)—was used by U.S. Representative Barber Conable-D to amend the IRS code for tax-exempt status to include infant-toddler programs and after-school programs in 1980. Up to that time, these sectors were not perceived as educational. Additionally, research by the NIOST serves as the basis for their work with various cities on system-building. During the past year, NIOST has conducted research that informed a detailed strategic plan for the St. Louis Mayor's Afterschool for All By 2010 Task Force.

At WCW we are committed to doing research that can make a positive difference and to shaping our questions as carefully as we conduct our explorations. The cited examples are selected to illustrate the variety of ways WCW research makes a difference.

Since our founding in 1974, hundreds of projects at WCW have resulted in the publishing of peer-reviewed articles, including many Working Papers available through the WCW’s publications. Additionally, WCW research has often been published in scientific journals and other venues of interest to scholars. One measure of this contribution is the extent to which our research is cited by other researchers in their publications. In a recent search of the Social Science Citations Index for four WCW researchers, dozens of publications by these researchers and their colleagues were found. One of the more frequently cited articles, “Gender and race patterns in the pathways from sports participation to self-esteem,” by Allison Tracy and Sumru Erkut, was published in Sociological Perspectives in 2002. Other articles that have been widely cited include Anne Noonan’s article, “‘At this point now’: older workers' reflections on their current employment experiences,” published in International Journal Of Aging & Human Development in 2005, and Nancy Marshall’s article, “Work-family strains and gains among 2-earner couples,” published in the Journal of Community Psychology in 1993. These publications—written by only four of the many researchers at WCW—have been cited in other scholarly publications a total of 2,187 times, a sample reflection of the contributions of all WCW researchers to advancing science and theory. Further, literally dozens of psychology text books include chapters or references to relational-cultural theory (RCT), which has been developed and taught through the Jean Baker Miller Training Institute. One such text, Diversity and Development: Critical Contexts that Shape Our Lives and Relationships, is based entirely on RCT.

This past fall and winter, research from the Critical Mass Study was referenced in dozens of articles in daily and industry papers such as the New York Times, Sacramento Bee, Calgary Sun, Harvard Business Review, Investment News online, and Fortune.com. The stories focused on the influence to the corporate culture of women serving on governing boards of major corporations.

This spring, the Nancy Marshall, in a recent education reform court case. This spring, Marshall was also invited by the Boston City Council to present data related to a recent, high-profile WCW evaluation of the public school system’s preschool programming. Also this spring, Nan Stein was invited by the Massachusetts Legislature to provide testimony on anti-bullying legislation which is under consideration. 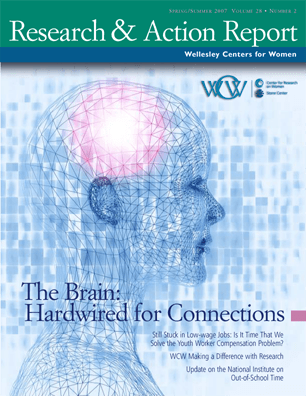