Gender-Equitable Education: A Focus on Literacy

Popular media has “balanced” attention to girls’ difficulties in math and science with considerable attention to boys’ difficulties in language arts. It has often been argued that both problems are a reflection of characteristics inherent in gender differences. However, a growing body of research supports the importance of socialization rather than biology in explaining disadvantages in academic subject areas. We believe that attention to gender socialization within the various contexts of children’s lives is key to understanding how best to prepare all students, girls and boys, for academic success.

The extent to which early interpersonal literacy practices at home contribute to later gender differences in reading practices and academic achievement is of particular interest to Michelle Porche, a research scientist at WCW. Porche, in collaboration with colleagues at the Harvard Graduate School of Education, is using data from the Home–School Study of Language and Literacy Development, directed by Catherine Snow, to explore gendered aspects of academic achievement in a sample of low-income students followed longitudinally from preschool through high school. This longitudinal research project was originally designed to study precursors to language and literacy development and the influence both of the home and of the school on early reading outcomes. As the participants have grown, the research focus has expanded to include investigations of social and psychological components of development that influence academic success.

Porche's most recent findings regarding gender and literacy have just been published as part of an edited volume of empirical research on boys entitled Adolescent Boys: Exploring Diverse Cultures of Boyhood (NYU Press). In this volume, editors Niobe Way and Judy Chu (formerly a researcher at WCW) have collected work that enhances our understanding of how the contexts of boys’ lives shape their identities and relationships, how gender socialization influences their development, and the ways in which boys resist stereotypical expectations. In her chapter, “From Preschool to Middle School: The Role of Masculinity in Low-Income Urban Adolescent Boys’ Literacy Skills and Academic Achievement,” Porche and co-authors Stephanie Ross and Catherine Snow take early observations of mother-child book reading in the home and later interviews with boys about their literacy experiences in middle school and examine them against the backdrop of longitudinal ability and achievement data. The boys and girls in the sample were evenly matched in reading ability at the beginning of the study; aptitude, as measured on standardized literacy tests, tended to remain constant from preschool to middle school. Over time, however, boys’ literacy attitudes and practices fell behind those of the girls.

Socialization is one key explanation in understanding gender differences in reading among this sample group of children. Mothers of boys and of girls reported similar reading practices when their children were in preschool. Researchers’ observations of early book-reading activities in the home, however, highlighted differences in the interpersonal aspects of early literacy practices, practices that led to qualitatively different experiences for daughters and sons. Mothers tended to request more information about, and talk more about, books when interacting with daughters. These brief conversations about the stories also included more praise and encouragement for the girls.

In contrast, reading with sons sometimes included resistance to the activity and a struggle among the boys to stay focused on the book, which suggests that boys may have had less frequent opportunities for book reading. In the middle school interviews this pattern was echoed when girls gave more elaborate descriptions of their literacy practices, offered more intrinsic reasons for reading, and were generally more positive about reading than the boys in the study. This contrast in attitudes may appear starker than actual differences in practice between girls and boys. Boys did talk about materials they read, but only after some prompting and after clearly stating that they didn’t like to read. Yes, they liked magazines, adventure stories, and scary titles written by Stephen King, but didn’t like things they had to read for school.

This analysis supports the need to pay attention to the intrapersonal processes of reading, such as individual and group differences in response to various genres of reading material. In future work Porche hopes to explore ways to intervene in students’ reading difficulties through the use of high-interest reading materials, such as magazines that are gender-specific in their audience, as a way to increase engagement, fluency, and comprehension.

However, to suggest that the problem might simply be a matter of taste in reading materials obscures deeper issues. Adolescence is a time when internalized gender ideology is intensified, with girls tending toward more stereotypical feminine behaviors and boys toward more stereotypical masculine behaviors. Rejecting reading as a passive feminine activity may improve a boy’s status within his social group but ultimately exacerbates disparities in reading engagement between boys and girls. Ultimately these differences have serious implications for academic achievement. Even boys in the sample who had high ability and engagement in reading typically related conventional attitudes about reading and authority such as “Reading is for girls” and “No one tells me what to do!”

The low-income sample of boys and girls did not differ in exposure to literacy activities in the home and were equally matched on language and literacy ability and early academic achievement measures. One gender was not naturally better at reading than the other. Furthermore, the stability of standardized cognitive tests given to the participants over the course of the study would have suggested similar academic outcomes for girls and boys. Yet in her analysis Porche uncovered the beginning of a divergent achievement path. She is currently analyzing data from interviews with students at the end of high school. This data documents the disturbing academic failure and near-failure of the very boys in the sample with the highest measures of cognitive ability and the most promise academically in early childhood.

Porche’s work points to the importance of sustaining student motivation throughout school, because even those who do well in the early grades sometimes drop off as they proceed though middle school. Girls in the Home–School Study sample tended to have more defined plans for a college education than did boys and also tended to perform better on tests of literacy skills than did boys, even the boys who were doing well on such tests in the earlier grades. Porche writes, “Contrary to recent popular discourse that attributes boys’academic struggles to attention paid to girls’ issues, data from our study offers a much more complex and perhaps puzzling story of boys’ trajectories of achievement.” The early routines parents establish in reading to their sons may communicate a subtle message that literacy, and by extension academic success in language arts, is not as critical for their sons as for their daughters. This does not mean that boys are discouraged from doing well in school. Rather, the emphasis may be placed on academic domains that are traditionally masculine, such as math and science, vocational programs that provide job skills, or extracurricular sports that are rough and competitive.

Porche notes that as students reach higher grade levels socioeconomic factors and perceptions of life opportunities may be as or even more important in academic achievement than are measures of ability. In addition, it is crucial to integrate an understanding of the ways that gender interacts with these factors. We are losing too many able students when we do not consider all of their life circumstances as we design their educational programs.

As part of her work on another project in Ohio with the Collaborative Literacy and Language Instruction Project, Porche is currently evaluating the long-term effect of the kindergarten parent-child intervention Project EASE, which provides training for parents in guided reading activities. Response from mothers and fathers has been enthusiastic across rural and urban communities. Parents have been highly engaged with their sons and daughters in the monthly sessions, and preliminary observations and assessments show positive correlations between participation and home support for literacy and children’s attitudes toward reading. Porche will continue to look for clues about gender socialization and the ways in which it affects literacy achievement as she analyzes this data.

Ideally Porche’s next project would be titled “Read Like a Girl!” Instead of the deficit model of boys’ learning that is often promulgated by the media, her research agenda would focus on the motivational attitudes and strategies that account for girls’ advantages in language arts outcomes in the context of gender socialization. Rather than denigrating success in literacy as less important than other educational domains because “it’s a girl thing,” this information would expose the danger of bias in gender socialization while contributing to literacy intervention and reforms that could benefit all students. 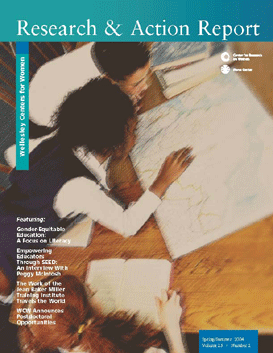