Wellesley Centers for Women is proud to partner with UNICEF for “Women and Children: The Human Rights Relationship,” a conference that examined the intersections and gaps between women’s and children’s rights in Asia. Held December 9-10 in honor of Human Rights Day, the conference brought together rights advocates from across the region to dialogue on and build shared agendas based on the Convention on the Rights of the Child (CRC) and the Convention on the Elimination of Discrimination against Women (CEDAW). Rangita de Silva-de Alwis, WCW senior advisor on international programs, leads the ongoing initiative.

Numerous case studies reveal that children’s rights cannot be guaranteed in a framework that diminishes women’s status and discriminates against them. On the other hand, gender-based subordination is deeply embedded in childhood and is part of the continuum of discrimination and violence that runs through women’s lives. The conference planners propose that, in reality, the struggles to realize the human rights of women and children have much in common because women and children have historically had similar disadvantaged legal and social positions. The human rights framework is an effective entry point for analysis and actions to promote gender equality and the rights of children.

Throughout a woman's life cycle, various forms of gender-based discrimination and violence manifest themselves at different stages. Even before birth, females in cultures where son preference is prevalent are targeted by the violent discriminatory practices of sex-selective abortion and female infanticide. Discrimination against the girl child manifests itself as physical and sexual abuse, enforced malnutrition, and unequal access to all resources including, health care, and education. Incest, female genital mutilation, early childhood marriage, and other harmful traditional practices, and the sale of children by their parents for prostitution, trafficking or bonded labor are all different but interrelated forms of gender specific discrimination and violence against girl children.

Gender bias in law has a negative impact on women’s and children’s access to numerous resources, including education, healthcare, ownership of property, and decision-making in both the family and the public sphere.Gender bias spills over into legislative responses to gender violence, including the way in which criminal law views violence against women and children. In many countries, even when laws offer equal protection, customary practices still subordinate women and girls. The Convention on the Elimination of Discrimination against Women’s greater elaboration of States Parties’ responsibilities with regard to measures in the private sphere offers another opportunity for those concerned with the rights of girls in particular, such as preferential access to education for girls in order to achieve substantive equality.

Using the Convention on the Rights of the Child (CRC) and the Convention on the Elimination of Discrimination against Women (CEDAW) together enables a more comprehensive human rights-based approach that takes into account specific vulnerabilities based on age, gender, and unequal power relations that result in violence and discrimination against both women and children. The two conventions also bring comparative strengths to the overall pursuit of women’s and children’s rights. This conference, “Women and Children: the Human Rights Relationship,” provided an opportunity to bring together experts and leaders in the field of women’s rights and children’s rights to examine complementarities between the two agendas. This meeting reaffirmed that human rights forms an indivisible and interdependent system of norms.

The December conference and follow-up communications via an online message board focus on practical and innovative ways to link the CRC and CEDAW in law and policy making in the region. Specific areas addressed include: law reform and creative programming regarding rights in the family, violence against women and children, equality in education, trafficking in women and children, and the reconciliation of work-family obligations. These issues are being examined through an analysis of the intersections of the CRC and CEDAW Committee Concluding Observations and Concluding Comments of Asian State Party reports. Using them complementarily produces a more comprehensive, expansive, and holistic framework of recommendations.

The overarching goal of the conference is to highlight the opportunities that CRC and CEDAW provide to promote the rights of women and children and examine the practical implications and added value of considering the two Conventions together. Furthermore the conference also identified strategic entry points for strengthening support to implement the CEDAW and CRC through national legislation, policies, and budgets. The conference and the continued online discussions also provide opportunities to establish a strong network and alliance for the promotion of women's and children's rights, as well as the implementation of the recommendations developed at the conference. This will be facilitated through information exchange that will continue to deliberate and act on the goals of the conference.

For more information on “Women and Children: The Human Rights Relationship,” visit www.wcwonline.org/asia2007. 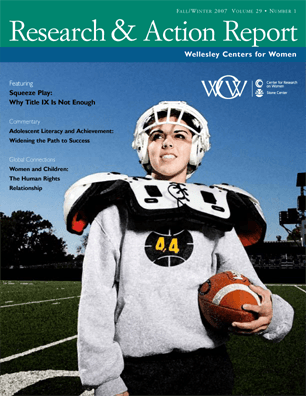