The WCW 2004 International Research and Action Conference: Innovations in Understanding Violence Against Women

In April, the Wellesley Centers for Women waspleased to welcome colleagues working in 46 countries across the globe to the WCW 2004 International Research and Action Conference: Innovations in Understanding Violence Against Women. Chaired by Linda Williams,Victoria Banyard, and Nada Aoudeh, this truly international meeting was designed for researchers, activists, advocates, and practitioners from the academic, nongovernmental, community-based, and government domains.

To maximize the opportunity for all attendeestoactively participate, the number of participantswas kept relatively small, with only 130 spacesavailable. The conference featured a distinguished anddiverse group of plenary-session speakers. However, most of themeeting revolved around94 field-initiated paper and roundtable discussion sessions concerning violence against women.

By placing gender-based violencein global, cultural, and local community contexts, theconference participants took a groundbreaking stance not usually evidenced at conferences onviolence against women in the U.S. Referring tothe well-received plenary panel “Violence and theIntersection of Multiple Oppressions,” Khatidja Chantler of the U.K. remarked, “The place of thepanel in a plenary session is noteworthy as itrepresents a shift to the center from the frequentlymarginalized spaces that such discussions inhabit.”

Notably, the conference participantsplaced the lived experiences of women and girls at the centerof inquiry. The voices of women were heard at theconference through the mixed-methods employedby researchers in their work. Research efforts thatadvanced the use of gender-relevant methodswere highlighted, and conference participants— includingresearchers, advocates and practitioners—tied their findingsto actions needed to prevent and ameliorate violence against women.

The conference design promoteddialogue and successfully fostered networking and theformation of collaborations across and within countries. As Indai Sajor stated in the closingplenary, “Working together and listening to oneanother, which we did in the past few days, webelieve a better world is possible.”

One of the many topics coveredat the conference concerned the way in which living in war zonesand conflict areas affects women. Participantsworking in many conflict areas across the globe, including Afghanistan, Palestine, Israel, Turkey, ElSalvador, and East Timor, demonstrated thatarmed conflict and the war on terror not only reduce the mobility of women but also contributeto discrimination against them. Women’s workand schooling—and the economic independencethat can come from them—often suffer to agreater degree than do men’s, and the negativeconsequences of war and of the war on terror canaffect women who live outside the zones of actualarmed conflict.

Nadera Shalhoub-Kevorkian’skeynotepresentation noted that, until recently, researchdid not focus on the way war affects women, or did so only when it served the purposesof those in power. The traumatic experience ofwar victimization and its pain, anguish, despair, sadness, and effects on individual women and girlsformed the core of her presentation. Across theglobe accounts of women’s victimization andtrauma are silenced, and women’s coping,adaptation, and survival often are not discussed.Shalhoub-Kevorkian’s work, like the work of manyothers at the conference, revealed the historicalimpact of political violence on violence againstwomen and the political legacy of the silencingof women’s victimization.

Another focus of the conferencewas the complex challenges inherent in conducting research onviolence against women in different cultural contexts. Incidence and prevalence studies inRussia, Japan, East Timor, the U.S., and manycountries in Africa and Latin America were discussed and compared. A number of sessionsaddressed the importance of women’s narrativesof violence in unraveling the intersection of race,gender, and class as well as understanding strategies for confronting the violence. Narrativeswere also used to understand women’sexperiences of violence over the life course.
Research incorporating women’s narratives can contextualize and validate women’s experiences inways that strictly quantitative research can not.The work of many participants from across the globe, including the Asian and Pacific IslanderInstitute on Domestic Violence and the MedicalResearch Council of South Africa, highlighted the narrative as an important way of researching the trafficking of women and girls, prostitution and sex work, female genital cutting, and so-called “ honor killings,” or femicide.

Other presenters examined theuse of the international human-rights framework as a way of approaching efforts to prevent violence against women. Projects in U.S. communities and in Uganda that have applied this framework were described, as were efforts in other countries through the work of Amnesty International.

Conference participants stressed the need to connect violence against women locally to global conditions and struggles in order to put an end to violence against women around the world. At theclose of the conference, a working group prepareda statement that many attendees signed. This statement appears on the conference website andidentifies four urgent areas for research and action.

First, based on presentations highlighting the impact of war and occupation on women, it isclear that in times of increased global militarism,physical and sexual violence against women by thestate, community, and family members intensifies.

Second, restrictions on freedom introduced as part of the war on terror have become a part of many women’s lives at home and abroad. In particular,women identified as coming from Islamic communities endure racial profiling and increased surveillance of their families and communities.

Third, the tightening of borders of western nation states through immigration controls has also increased women’s vulnerability. Abused women whose immigration status is uncertain do not have access to necessary support services, keeping them entrapped in abusive relationships.

The fourth critical area is the effect of globalization on women as it specifically pertains to forced trafficking and selling of women across borders.The growing demand for buying sex and cheaplabor in rich countries has increased the vulnerability of socially marginalized women inpoor countries to such abuses.

WCW is working to make the material from theconference easily accessible. Abstracts of conference papers are available on WCW’s website, and copies of PowerPoint presentations should soon be posted. Papers fromthe conference are currently being considered for publication as WCW Working Papers, which will make them available without the usual delay involved in journal publication.

As would be expected with atopic as complex as violence against women, the conference generated more questions than answers. It heightened awareness of the need for continuingdialogue and for an increasingly nuancedunderstanding of the issues. Conference organizers are planning to bring participants together for further seminars, discussion, and action in the coming months. 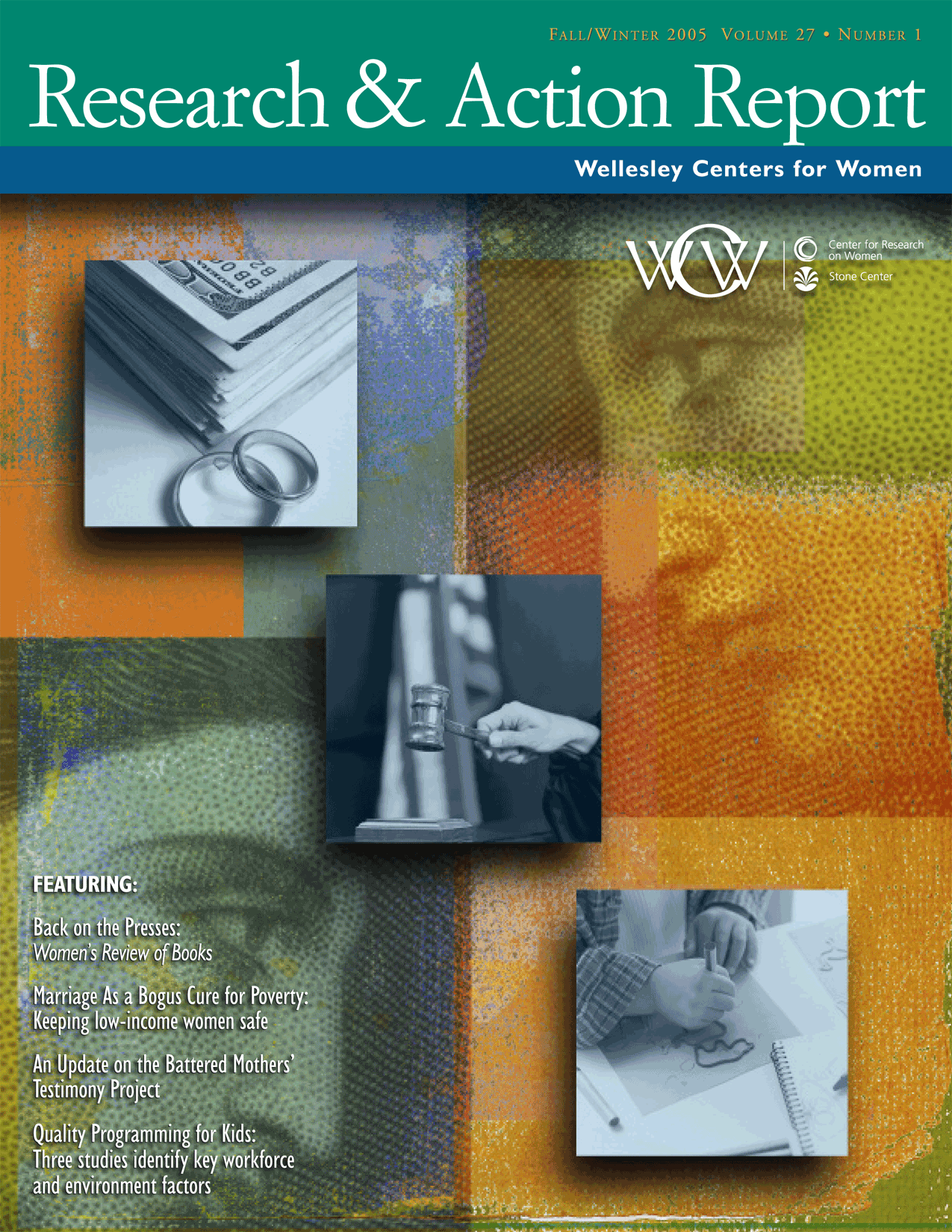