Q&A with Linda Gardiner, Editor of The Women's Review of Books

What do you like most about editing the Review?

It's an unending education—being able to keep in touch with so much that's going on in women's writing, everything from fiction and poetry to science, music, sports, biography and memoir, psychology, criticism, politics. And the chance to work with an enormous range of smart women and good writers—editing their manuscripts is usually an opportunity for discussing with them the issues the books raise, and for me to learn a bit more about each subject we cover.

What do you like least?
Always being on deadline!

Why publish a Women's Review— why is that necessary?

Twenty years ago when we began planning the Review, the new writing coming out of the women's movement was hardly noticed by the mainstream, and any attention it did attract was rarely favorable. Most book reviewers were men. A number of women tried to convince the New York Times to review more women's work—Marilyn French and
Carolyn Heilbrun were among them—but they had a very small impact. The only way to get serious attention for women's writing was to start a new publication, run by women for women. So that's what we did. Unfortunately, things have not changed very much in the last 20 years, although the number of books published about and/or by women has skyrocketed. If you go through three or four months' worth of Times book reviews and count up the number of books by women or about women and the number of women reviewers, I guarantee you'll be
shocked. The same is true for other well-known review media like the New York Review of Books or the London Review of Books.

Who are some of the well-known writers who review for you?

Many creative writers don't write book reviews at all, but there are a number who do at least now and again. Novelists like Marge Piercy, Barbara Kingsolver, and Rosellen Brown, and poets like Marilyn Hacker and the late June Jordan have written for us. So have many well-known nonfiction writers like Alix Kates Shulman, Ellen Willis, and Jill Nelson. In academia, of course, people review much more frequently, and many of
the senior figures in most fields have reviewed for us at one time or another— Gerda Lerner in history, Evelyn Fox Keller in science, Catharine Stimpson in literature, Arlie Hochschild in sociology, Susan McClary in music, and so on.

You've been publishing The Women's Review of Books for almost 20 years now. That's pretty impressive. What keeps you going?

Most of all the sense that we fulfill a real need that no one else is meeting. Readers regularly tell us we're their lifeline, their only contact with the world of women's writing. A reader in Chile wrote to tell us that her copy is passed around among 20 women who then meet to discuss issues arising out of it.

With all the books by all the talented women writers, how do you choose which books to review?

From the 200 or more books that we receive each month we select 40 or 50 that look as if they would be interesting to an audience as
wide as ours—that is, new (not reprints), reasonably nonspecialized, nontechnical books on topics of interest to what we think of as the feminist intellectual community at large. We try to spread our reviews by subject matterÂ—not too much 19th-century history, not too many critical studies of 20th-century English novelists, and so on. Books on "new" subjects are more likely to catch our attention than the 200th book about Virginia Woolf. In each issue we schedule reviews of books about women of color, poor and working-class women, lesbians, women outside the U.S.A.—groups that mainstream reviews hardly recognize.

We haven't changed anything central to the publication, but we find ourselves reviewing rather different kinds of books than we did initially, because what is being published has changed. We review much more memoir and biography and fewer feminist critical or theoretical books coming out of academia, because so many of those are written in impenetrable jargon or address very technical "insider" issues.

What makes the Women's Review unique? What role does it play in the world of women's writing?

Other women have published book review magazines that were rather different from ours. One was Belles Lettres which was published in the 1980s and focused more directly on fiction and poetry, not on the broad range of topics that we do. They weren't able to keep going, for a variety of reasons, for more than a few years. One thing that makes the Review special and keeps readers wanting it is, I think, that we use the genre of book review to address all sorts of burning political and cultural issues. It's not just a "what-to-read" consumer guideÂ—we often say that it's "a monitor of the currents in contemporary feminism." It's less heavy going than an academic journal, but more serious and thoughtful than something like Ms. (though I admire Ms. a great deal for what it does do). We really don't have a way to gauge our influence, but we hear many anecdotes from individual readers who tell us that a particular review got them thinking about a new topic, or introduced them to a writer they wouldn't otherwise have heard of.

Are there publications like the Women's Review in other countries? Who are your colleagues around the world?

There have been, but most, perhaps all, are no longer publishing. Until a few years ago, an International Feminist Book Fair was held every other year, which we always went to. We met some fantastic women publishers and writers from all over the world. A group of Italian women published Leggere Donna, a group of women in the Netherlands published Surplus, a group of German women published Virginia Â—all book review magazines, mostly run by volunteers. We would all get together in Barcelona or Amsterdam or Montreal and share stories and ideas. Sadly, the Book Fair stopped happening because it had no continuing permanent organization and it just ran out of volunteers to keep it going. Many of the women who were publishing magazines moved on to other things. It's a great loss, but it's very hard to keep a magazine going on a mostly volunteer basis for years and years. We're very lucky to be able to pay our staff and writers from the income the
Review generates.

What is happening in feminist publishing right now? Are there upcoming writers we should be looking out for?

There are always new writers and scholars coming along, but it's hard to pick individual ones out right now. One thing we've tried to do is reach out to younger women and invite them to write for usÂ—I think of Leora Tanenbaum, Jennifer Pozner, Angela Ards, Veronica Chambers, Lori Tsang, and others in their 20s and 30s, really sharp, creative, politically energetic young women and good writers. I'm sure that many of them will become well-known names as time goes on. I'm also delighted that the daughters of several feminist scholars are now writing for us just as their mothers have done—Lisa Marcus, the daughter of critic Jane Marcus, and Rebecca Walkowitz, the daughter of historian Judy Walkowitz, are two examples.

Aren't small publishers having a hard time these days? What are some of the particular challenges you face?

As I said, a number of feminist organizations and publications have gone out of business in recent years, in most cases because they were never able to get on a permanently secure economic and organizational footing and just ran out of steam. More broadly, small presses and magazines see the costs of publishing going up but see no new sources
of support that will cover the increases in postage, paper, and so on. The advent of the Internet has created an enormous competitor for readers' time and attention, and many publications have tried to move
to online publishing, usually without much success. The biggest challenge isn't to find and publish good, valuable, important workÂ—there's lots of that around. The challenge is to stand out from the great mass of other publications and other media and find those readers who will want your publication and value what you're doing.

What's in the future for the Review?

It's very hard to see what lies ahead in publishing generally, let alone in women-focused publishing. Realistically, times are hard and the growing monopolization of the media by a few giant conglomerates makes it harder for any magazine or press without enormous financial resources to do more than just keep their heads above water. I think that the
Internet will soon become a way to expand our readership, but right now it's in a state of flux—in particular, we're hoping that the notion that all Internet content ought to be free will go away before too long! We have some ideas for developing a website that would be an innovative adjunct to the Review, not just a place to post content from the print edition. And we would like to publish more general cultural and political essays from feminist perspectives, as well as book reviews, since there is really nowhere else to find those anymore. At the same time, I think the key thing for us to remember is that everything we hear from our readers tells us that we're offering a unique and irreplaceable resource. To keep on doing what we have been doing for the last 20 years, in as fresh and engaging a way as we can
every month, is the most important thing we can do.

To subscribe to The Women's Review of Books or to read excerpts
from current and recent reviews, visit www.wellesley.edu/WomensReview. 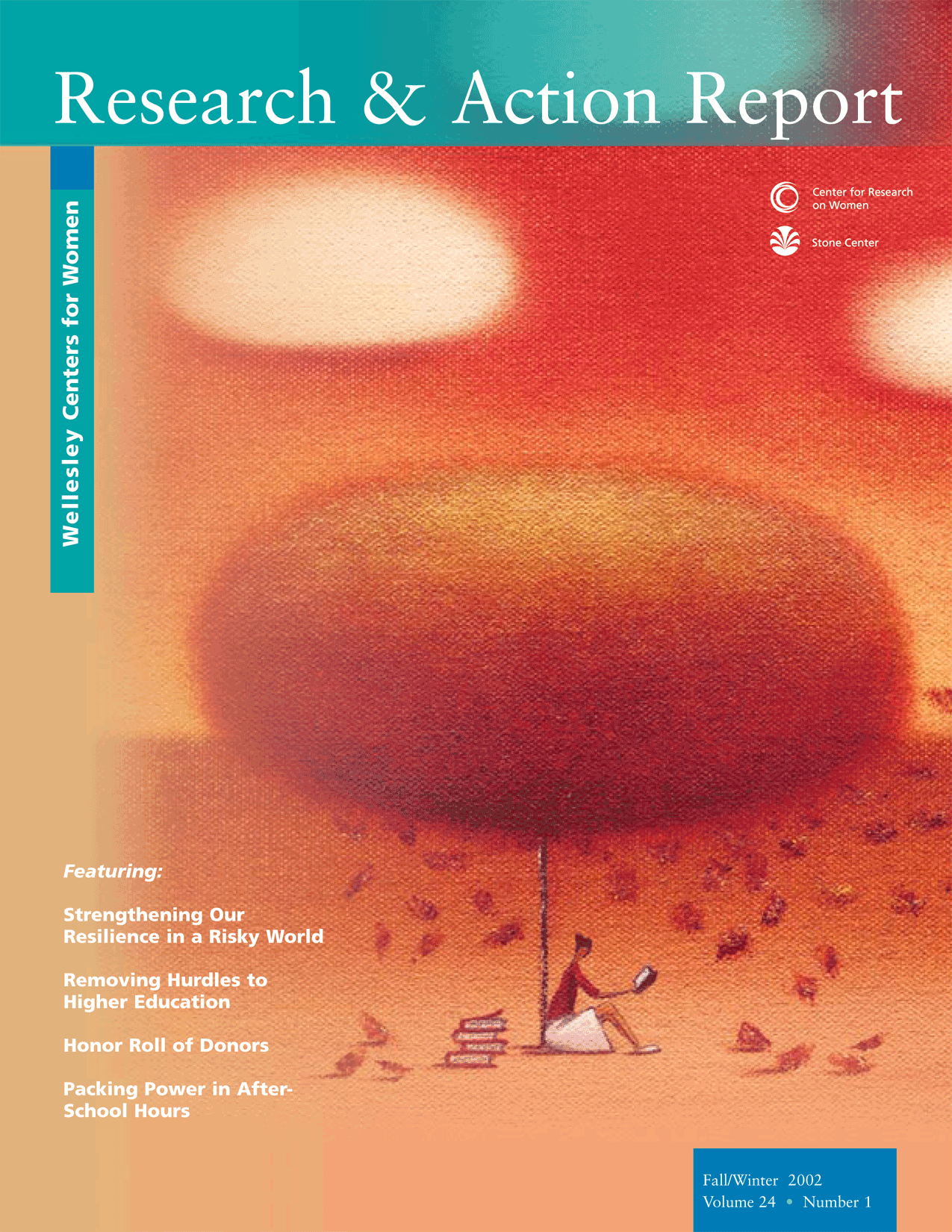